A valued commenter sent me the open enrollment packet for the University of Georgia System that I think highlight a couple of interesting things about the decisions companies make when offering insurance plans to their employees.  One slide in particular stood out to me, and that is the total cost splits for coverage.

This is interesting for four reasons.  First, the university is showing both the cost to the employee and the total premium cost. This is unusual but becoming more common.  PPACA requires employers to tell employees the cost of health coverage in box 12DD on the annual W-2.  They are not required to show it in the open enrollment period.  None of these plans are Cadillac plans.  The goal is to get people more aware of where their pay raises went. 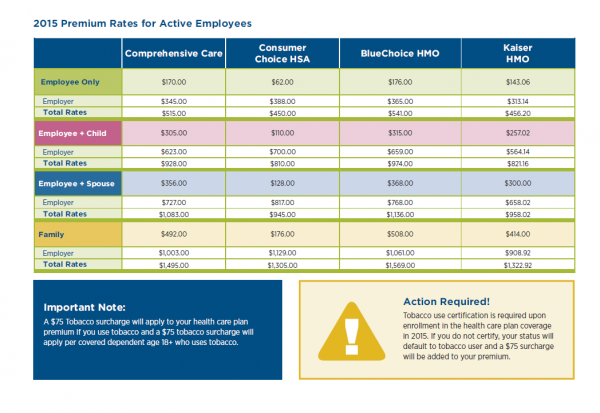 Secondly, the subsidization rate varied by plan.  Comprehensive Care was the least subsidized at all tier levels as the employee picked up 33% of the premiums. BlueChoice HMO and Kaiser HMO each had the employee pick up between 31% and 32% of the cost while the Consumer Choice HSA has the employee picking up 14% of the costs.  UGB is pushing people hard to the HSA model while nudging peoplem away from Comprehensive Care and BlueChoice.  Choice is being maintained, but the structure of the premiums for employees means there will be an ingroup adverse selection issue as healthy people will migrate to the Consumer Choice HSA, and unhealthy people will go to the more expensive plans.  This is a little odd as Kaiser’s total cost of premiums for much better coverage is no more than the cost of a good burrito per person covered per month than the HSA coverage.  If UGB is interested in pushing people to buy cheaper coverage, it would make more sense to roughly equalize the employee costs for Consumer Choice HSA and Kaiser and then give a second, much higher tier for Blue Choice and Comprehensive Care.

The third thing I noticed is the structure of the employer provided subsidy for health insurance.  It is a flat percentage modified by plan choice.  This is becoming more unusual.  UGB could probably have a more predictable budget if they said that they would kick in $357 per employee per month for employee only coverage.  That would give UGB a predictable health insurance budget where the only variables in play would be the number of employees electing coverage and what tier of coverage they are electing.  It would remove the variable subsidy by plan.

A pair of health policy researchers with the same hire date, the same hourly rate, the same boss, the same grant funding source and the same title could have wildly different total compensation packages and costs of employment for UGS.  A single person or a person taking employee only coverage is $500 or more a month cheaper than family coverage from the point of view of UGS.  This cost structure means there is a strong incentive to hire the person covered by someone’s insurance, a strong incentive to hire single person over the married or domestic partnered person, a strong incentive to hire either the childless adult, or the adult with only adult children over the worker with minor children, and a minor incentive to hire the shacking up but not married over the married.  That is a strange incentive structure we’ve put in place to run an invisible social welfare that is massively government subsidized but it is not an actual check from the government.

One of the things that I think most large employers will change over the next couple of years is to a more defined contribution model.  They will tell employees that they will have four or five or twenty seven choices to make.  The employer will kick in a flat amount of money sufficient to buy “adequate” coverage but anything over that minimal adequate coverage is coming 100% out of the employees’ pockets.  That flat fee may or may not vary based on family situations,  but the defined contribution model would lead to more predictability from the employer point of view, and slowly continue the disentanglement of healthcare from employment.  Privately run exchanges as well as the public SHOP exchanges will take on the burden of the open enrollment period.