You are here: Home / Anderson On Health Insurance / 63 Hours until the end of open enrollment

Open Enrollment for the ACA individual market will be ending in 63 hours for most of the country.

After midnight on the 15th, getting covered becomes a whole lot more difficult and haphazard in most of the country.

When you are looking at plans, be aware of the premium and coverage pay-offs.   If you know that you have hyper expensive conditions, you’re optimizing on a good for you network at an insurer that does not hassle you and then from there minimizing total cost which is out of pocket maximum plus your net of subsidy premiums.  Everyone else should be calculating on the relative zones of superiority of each metal band while minimizing costs.

We’ve talked about superiority zones as the differences in out of pocket costs for a given level of claims.  This gap can be filled in by premiums so the actual zone of superiority of one plan over another at any given claim level is the cost sharing of that claim level and the premium.  This will vary by county plan offerings and it will vary by age as premiums, net of subsidy, will vary significantly by age.

We looked at a hypothetical example in September: 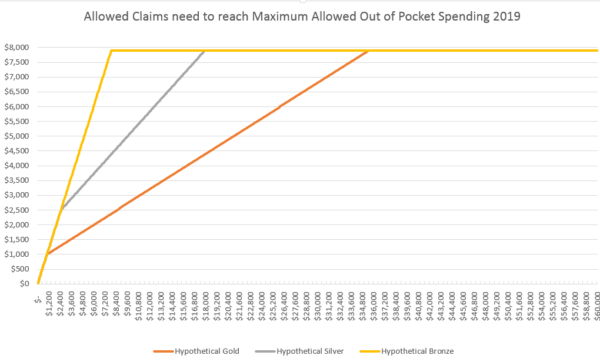 What is happening here?

Bronze, silver and gold plans are identical in their benefits for people who anticipate having between $0 and $1,000 in claims for the future year. The insurer pays nothing, and all of the claims expense is coming out of pocket. Between $1,001 and $2,500 in allowed amount of claims, bronze and and silver are the same.  Bronze hits the common out of pocket maximum after “only” $7,900 in total allowed claims costs.  Gold hits the shared out of pocket maximum after $35,500 in total expenses.  If a person has “only” $30,500 in total allowed claims, their out of pocket expense for gold is $6,900 while it is $7,900.

We need to consider premiums though. On Healthcare.gov, the pricing sequence from cheapest to most expensive for a given insurer/network/plan type combination is either Bronze-Silver-Gold or Bronze-Gold-Silver. Either way, the gap between higher actuarial value plans (Silver and Gold) in out of pocket expenses and premiums for any given claim level shrinks as individuals are less heavily subsidized, if at all.

These are tough decisions to make. Buying insurance is tough as it involves assumptions against the unknowable future on multiple axis, but laying out reasonable projections of differential cost sharing for common scenarios and considering premiums is a good first step.