You are here: Home / Photo Blogging / On The Road / On The Road – Redshift – John Lewis Funeral Procession and Black Lives Matter Plaza

In tonight’s On The Road, Redshift pays respects to our beloved John Lewis.

When I got to the story about how Redhift was told by the cops that they weren’t supposed to be inside the street-side barriers, I thought of Pete Seeger singing at Obama’s celebration, and these words:

As I went walking I saw a sign there, and on the sign it said “No Trespassing”, but on the other side it didn’t say nothing, that side was made for you and me. ~WaterGirl

This Land Is Your Land
Words and Music by Woody Guthrie

This land is your land, this land is my land
From California to the New York island,
From the redwood forest to the Gulf Stream waters;
This land was made for you and me.

As I was walking that ribbon of highway
I saw above me that endless skyway;
I saw below me that golden valley;
This land was made for you and me.

I’ve roamed and rambled and I followed my footsteps
To the sparkling sands of her diamond deserts;
And all around me a voice was sounding;
This land was made for you and me.

When the sun came shining, and I was strolling,
And the wheat fields waving and the dust clouds rolling,
As the fog was lifting a voice was chanting:
This land was made for you and me.

As I went walking I saw a sign there,
And on the sign it said “No Trespassing.”
But on the other side it didn’t say nothing.
That side was made for you and me.

In the shadow of the steeple I saw my people,
By the relief office I seen my people;
As they stood there hungry, I stood there asking
Is this land made for you and me?

I went downtown yesterday (7/27) to see the funeral procession for the great John Lewis and pay my respects. The mayor had encouraged people to pay their respects virtually, because of the pandemic and because it was dangerously hot, so there were not a lot of people on the streets, but I was glad I could be there. I only took one good photo of the procession, because I didn’t want to be fiddling with my camera, and afterward I walked up to Black Lives Matter Plaza, which I hadn’t visited when the crowds were there. One gentleman on my corner said that the protests have mostly died down in DC, though there had recently been a resurgence to demand justice for Breona Taylor. Quoting him, “Even the anarchists are gone! There used to be a couple hundred of them getting into it with the police after dark, now there are maybe ten or twenty.”

The funeral procession of John Lewis passing in front of the Museum of African American History and Culture, of which he was a major supporter, and the Washington Monument.

As I walked up 15th Street toward Black Lives Matter Plaza. I crossed Pennsylvania Avenue. This is the block in front of the White House, which was closed to traffic and turned into a pedestrian walkway a few years back for people to visit the White House (and for additional security.) Now it is part of Trump’s coward’s fortress, which a guard box and “authorized visitors only.” 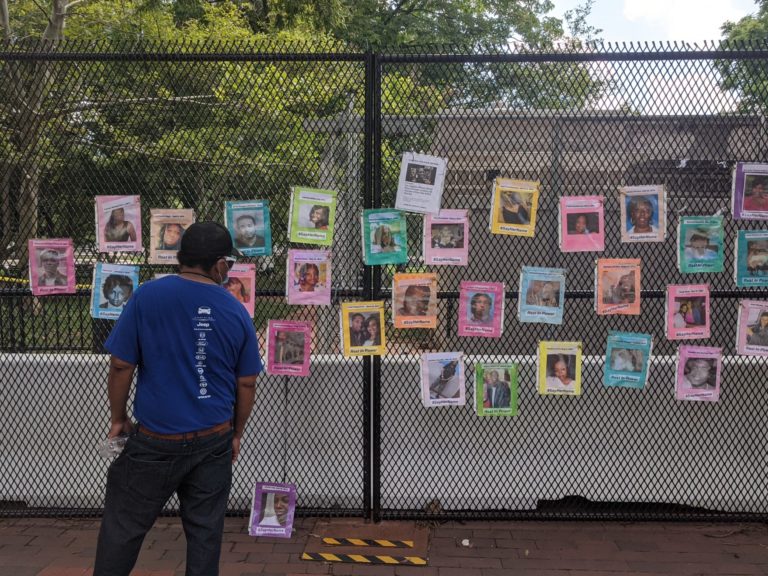 From the day Trump had his fence put up, it has been a place for displaying messages for the cause. In addition to the great posters and banners, there are a large number of very moving portrayals of Black and Brown men, women and trans people who have been killed by the police. 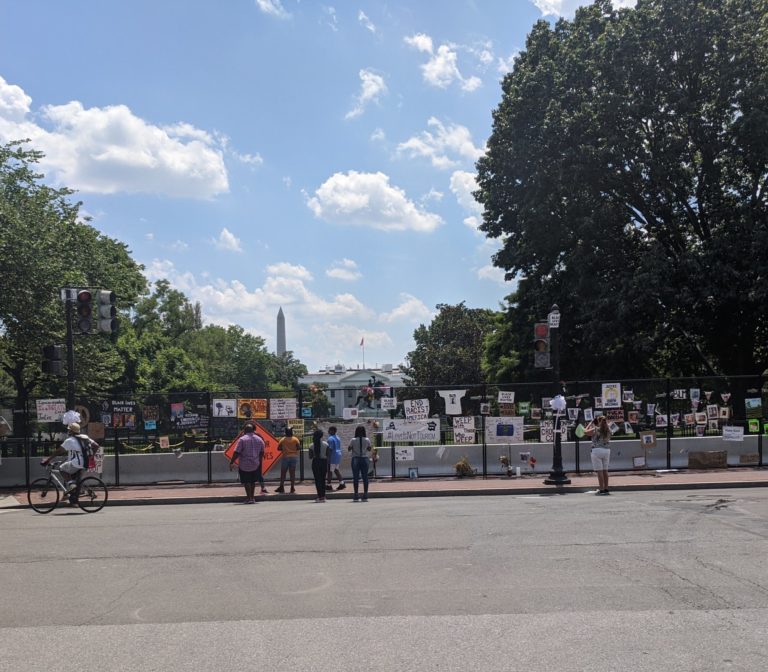 The view of the White House. The white ribbons on the light poles are in honor of John Lewis; his procession stopped here. 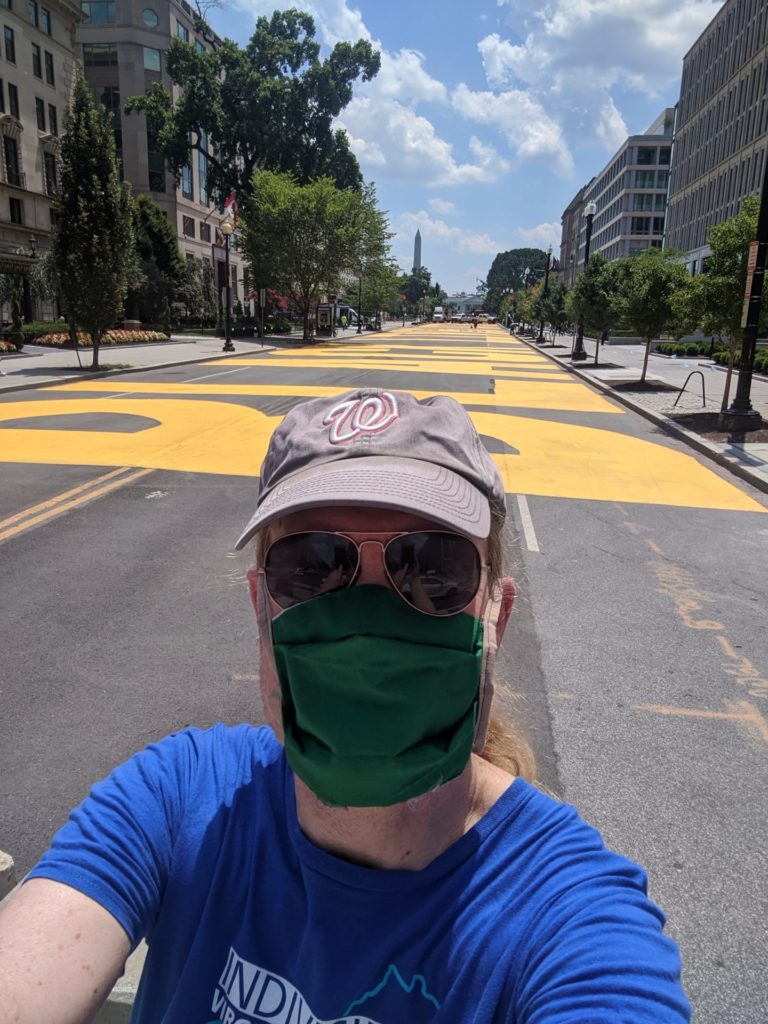 The long view of Black Lives Matter Plaza (and me!) 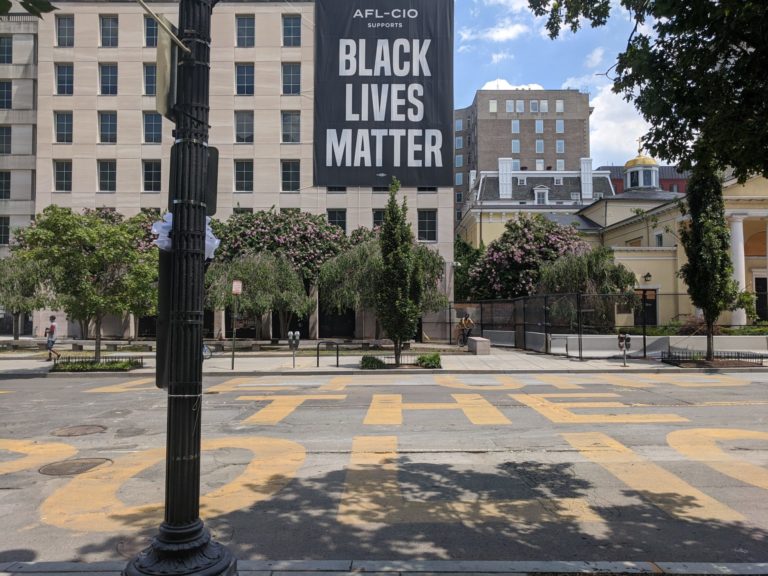 The “Defund the Police” message, which was added by protesters to the officially-sanctioned Black Lives Matter street painting. Above is the giant banner hanging at AFL-CIO headquarters in support of Black Lives Matter. Many businesses and organizations on the street had window hangings, including the very fancy Hay-Adams Hotel. One notable exception was “The Ronald Reagan Presidential Foundation and Institute,” which is just boarded up (which I have to admit I was rather gleeful about, I’ll share a photo in the comments.) 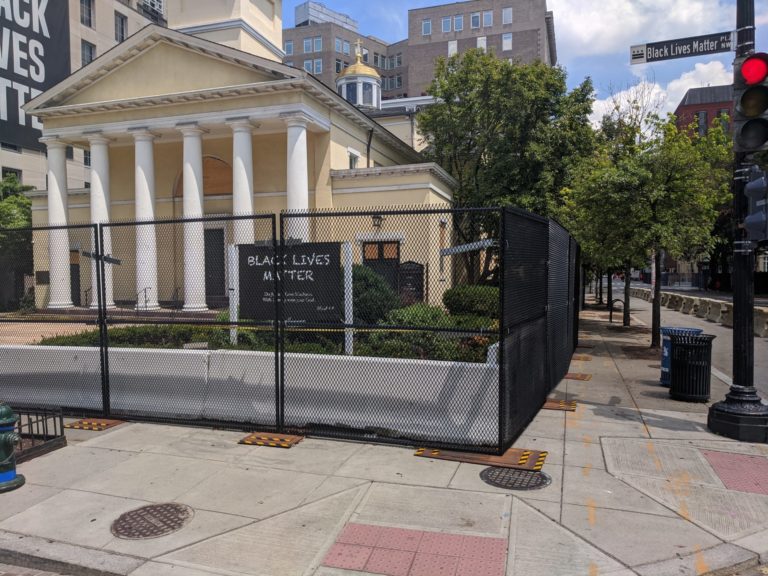 This is the site of Trump’s infamous photo op. There’s a lovely Black Lives Matter sign in front, which should prevent any recurrence. Though it’s a little hard to see here, the church sign he posed next to now reads “Love Thy Neighbor.” The fencing and concrete barriers (there are more in the street) are apparently to protect it from any further damage, and that corner is the only place there were cops. I didn’t realize that; I got to experience my own little moment of white privilege when I went and took photos through the fence — a cop waited until I was done and then politely informed me that I wasn’t supposed to be inside the street-side barriers. 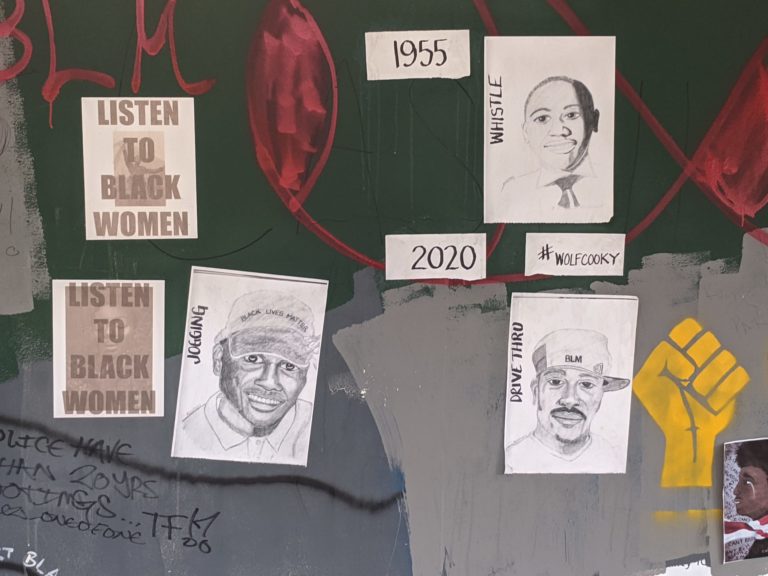 There are construction walkways near the plaza that have become spaces for even more activist art and voting messages. I thought these images were particularly powerful.