Nazis- I hate these guys

You are here: Home / Archives for Nazis- I hate these guys

I’m sure you all, like I, am waiting for Adam’s update, which, I am also sure, will be filled with a fresh update on all of Russia’s warcriming.

I would like to put out that if you watched the Putin speech filled with eliminationist rhetoric, and what thhey are doing with the wholesale slaughter of the undesirable Ukrainians, that their actions are the end result of the same eliminations rhetoric that we hear every day from what in the past was the GOP and right wing fringe but is now mainstream Republicanism. If you go beyond their rhetoric on minorities, lgtbq, etc., it would be no different from what the Russians are doing in Ukraine. Maybe by different means, but the same end goal.

END_OF_DOCUMENT_TOKEN_TO_BE_REPLACED

Trump senior adviser Stephen Miller became the latest White House staffer to test positive for COVID-19 late Tuesday. Miller said he tested positive after repeatedly testing negative, raising concerns there may be many more within the president’s orbit unknowingly carrying the virus even as they report testing negative.

“Over the last 5 days I have been working remotely and self-isolating, testing negative every day through yesterday,” Miller said in a statement. “Today, I tested positive for COVID-19 and am in quarantine.”

Thoughts and Prayers… for the virus.

I really should read my own fucking blog.

END_OF_DOCUMENT_TOKEN_TO_BE_REPLACED

So help me out here- which cop is the bad apple? Is it the one beating him on the legs? Or the one who blasted him in the face with pepper spray? Or the ones beating his upper torso? Or the ones cracking his hands with a baton?

END_OF_DOCUMENT_TOKEN_TO_BE_REPLACED

I am so sick and tired of hearing people trying to turn these people into boogeymen:

This country doesn’t have an antifa problem, it has a fascist problem. Deal with the fascists and antifa members will go back to making artisanal ice cubes, roller derby, pta meetings, and trading sourdough cultures

END_OF_DOCUMENT_TOKEN_TO_BE_REPLACED

It never stops with these people. Apparently Stasi Barbie has a new “athleisure” line of clothing.

We live in the dumbest timeline.

END_OF_DOCUMENT_TOKEN_TO_BE_REPLACED

Over the weekend, a group of degenerate scumbag, gun-humping, right-wing, Trump loving douchebags attempted to start riots in Portland. This is largely unremarkable because this happens all the fucking time in Portland, but it was notable in several regards. First, there was no violence, because the police cordoned off the group of manbaby Proud Boys and 3 Percenter dipshits. Second, a true American hero was born:

Warning for language. This man does not like the Proud Boys. @KGWNews pic.twitter.com/v9P8QNZR9h

The “you’re cool” to the dog made it for me.

At any rate, the usual suspects tried to gin up antifa violence, including Quillette’s Axis Sally wannabe, Andy Ngo, but largely failed to make their case. On the other hand, this report from the HuffPo is pitch perfect:

A few hundred fascists once again invaded Portland for a much-anticipated rally Saturday, but this time were mostly deprived of the violent spectacle they crave, as a much larger group of anti-fascists made them know they weren’t welcome in this city.

The fascists belonged to far-right groups including the Proud Boys, Patriot Prayer and the Three Percenters. And whereas at previous Portland rallies these groups have often confronted and attacked anti-fascist protesters, this time they were barely given the chance to do so. Upon arriving at Tom McCall Waterfront Park around 11.am. Saturday, they were kept separated from their foes by concrete barriers and a phalanx of police.

The fascists ambled about, singing the national anthem and chanting “USA” for a mere 30 minutes before deciding it was time to leave. An accommodating Portland Police Bureau — which has been criticized for siding with, and sometimes maintaining friendly relationships with, such far-right extremists — then escorted them to the Hawthorne Bridge, which was closed off to the rest of the city’s residents, for a happy march across the Willamette River.

It was a striking scene: the same group of out-of-town fascists that have terrorized people here for years, given free rein over a city bridge, on their way back from an unpermitted rally in a public park, after weeks of threatening to harm and kill local anti-fascists.

But the police department’s decision nevertheless may have prevented bloodshed, as it largely stopped fascists from crossing paths with their enemies. (“We did not show preferential treatment, but rather facilitated a de-escalation of potential conflict,” Police Chief Danielle Outlaw later argued.)

No mincing of words, no playing both sides, no attempts to equate antifa with these thugs, etc. Just a great job telling the truth about what happened. Notice this caption to a photograph: 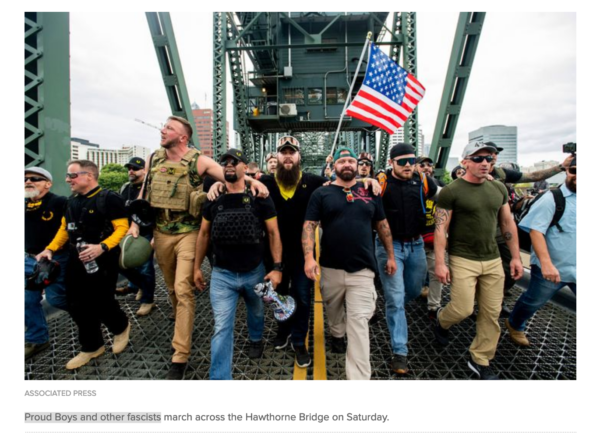 END_OF_DOCUMENT_TOKEN_TO_BE_REPLACED

Addressing the problem will require a number of different approaches, some broad, some narrow. President Trump, a man who is comfortable using his bully pulpit for the most frivolous of reasons, should take the time to condemn these actions repeatedly and unambiguously, in both general and specific terms. Simultaneously, the president should work with Congress to devote more resources to infiltrating, tracking, and foiling nascent plots (during the 1940s, the KKK was partly destroyed by a radio show that weaponized insider information against it), and he should instruct the federal government to initiate an information campaign against white-supremacist violence in much the same way as it has conducted crusades against drunk driving, human trafficking, and domestic violence. Just as the government must not react to these incidents by abridging the Second Amendment or the Fourth Amendment, obviously the First Amendment’s crucial protections must also remain intact. But where action is consistent with the law — there is no prohibition on monitoring hotbeds of radicalism, nor against punishing those who plan or incite violence — it must be vigorously taken.

THIS IS HIS FUCKING BASE. The guy in Texas wrote an anti-Hispanic manifesto in which he referred to them as invaders. Why does that seem so familiar?

The president of the United States — who condemned the El Paso attack on Twitter — has repeatedly referred to an “invasion” at the southern border; condemned Mexican immigrants as “rapists” and Syrian refugees as “snakes”; accused his critics of treason on at least two dozen occasions; and told four elected women of color to “go back” to the “crime infested places from which they came.” (It is worth noting that Crusius, in his alleged manifesto, claims his views “predate” and are unrelated to Trump but then goes on to attack “fake news.”)

Fer fuck’s sake, he’s done everything but call them untermensch. He proposed a ban on all Muslims entering the country. The lone black Republican is retiring. Trump spent the last week attacking a black congressman and calling his predominantly black constituents residents of a rat-infested hellhole. He’s got armed guards keeping them in cages and subhuman conditions for asking for ASYLUM. He’s leading chants at fucking rallies to tell congresswomen of color “back to where they came from” *wink wink*.

One of the very first things he did when he took office was to attempt to change the Homeland Security Department’s counter extremism group to focus only on Islamic Extremism. Your entire god damned party freaked out on Obama for WARNING YOU about this shit.

HE’S NOT GOING TO DO JACK FUCKING SHIT ABOUT WHITE SUPREMACISTS.

Oh, you will also be wholly unsurprised that the NRO doesn’t think we should talk about guns.