You are here: Home / Open Threads / And We’re Back

Yay for Comcast. A reward for you all- a freshly bathed Lily, who I got mostly dry but then she ran around the house like a crazed person, and I just gave up trying to finish drying her off. I went and did something else and caught her lounging on Tunch’s futon: 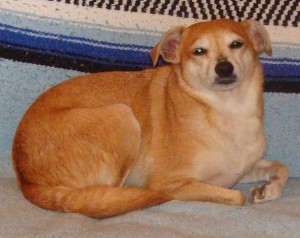 I have about 50 books lined up to read, so of course I’m on the couch reading the Hitchhiker’s Guide. Again.