Via Atrios, James O’Keefe will be on Good Morning America tomorrow morning.

And Politico asks the important question:

James O’Keefe will probably end up a wealthy man out of this, with a Regenery book deal and a wingnut welfare sinecure. Who says crime doesn’t pay?

END_OF_DOCUMENT_TOKEN_TO_BE_REPLACED

I got yelled at for forgetting a Stanley Cup thread the other day, so here ya go.

END_OF_DOCUMENT_TOKEN_TO_BE_REPLACED

Even the liberal New Republic is impressed:

Constantly jumping in and out of National Guard helicopters and drawing up plans for additional “burrito levees” and “boudin bags” needed to stop the oil slick from flowing further into his state’s marshes, Jindal has quickly mastered the details of the issue. At a press conference in New Orleans in mid-May, the Washington Post reported that “he gave updates on the size of tar balls washing up in Port Fourchon (up to eight inches), the number of sandbags to be air-dropped (1,200) and state money spent to date ($3.7 million). He also provided a weather forecast (‘The winds continue to come out of the southeast, 10 to 15 knots’).”

This reminds me of when America’s mayor won the Battle of 9/11.

That long black cloud is coming down.

END_OF_DOCUMENT_TOKEN_TO_BE_REPLACED

France’s coach, Raymond Domenech must have thought that the gods were smiling on him when France emerged in Group A facing the following opponents: Mexico, South Africa and Uruguay. While none of these nations are pushovers, it could have been much worse for Domenech, chiefly if the draw had left them with another tough European opponent in the group with them. There was certainly no karmic smackdown for Thierry Henry’s notorious handball that led to the goal that sent Ireland to the couch for June and France to South Africa. Here’s a view of their roster before the final cut to 23 due tomorrow.

Domenech’s most surprising decision in my opinion has been in his selection of attackers. While Thierry Henry will likely be used only as a substitute, the inclusion of Djibril Cisse, who has never impressed me, instead of Karim Benzema has me puzzled. Cisse is inconsistent, to be polite, with one more international goal than Benzema with eleven more appearances. Odds are that Nicholas Anelka will be bearing the brunt of the attack along with midfielder Franck Ribery. Indeed, it’s the midfield and defense where France excel, notwithstanding the age of some of their players (yes I’m talking about you, William Gallas).

The host country is a bit of a puzzle to me with the exception of a few players and their coach, the Brazilian, Carlos Alberto Parreira. The only players I have seen play with any frequency are Aaron Mokoena, a fine defender who plays in England, Benni McCarthy, a journeyman forward who has played in Holland, Spain and currently in England and Steven Pienaar, who is a solid attacking midfielder for Everton in England. Parreira led Brazil to the World Cup Championship in 1994 and coached them in 2006. He has also coached Kuwait, Saudi Arabia and the United Arab Emirates in the World Cup. Here’s a view of their preliminary roster, most of whom play their club football in South Africa.

Uruguay has a potent strike force in Diego Forlan who won the goal scoring title in the Spanish League for the 2008-09 season for his current team Atlético Madrid after having won it with Villarreal in the 2004-05 season. He also scored both goals in this year’s first Europa League final win against Fulham. His likely strike partner is Luis Suarez who is as versatile as Forlan is formidable, with ability to come from the wings and the middle to score or feed to Forlan.

Where Uruguay is weak, in my opinion is on defense. Goalkeeping is shaky and, with the exception of Walter Gargano, one of the best holding midfielders around, the rest of their defense is adequate, but does not thrill me and may be vulnerable on the counterattack with a skilled team attacking their goal, especially if the weak goalkeeping surrenders an early goal. Here’s their preliminary roster

Mexico may be the sort of team that gives Uruguay and France trouble. They have excellent speed in the attack with Carlos Vela and Javier Hernandez forming a solid strike pair with midfield support from Andres Guardado and Giovanni dos Santos making for arguably the best attack in this group. Defensively it depends on the health and mental stability of Rafa Marquez a gifted center-back whose role at FC Barcelona has been diminished in recent months and whether the young Hector Moreno will pick up the slack. In addition, it’s absolutely essential for goalkeeper Guillermo Ochoa to be solid against the likes of Franck Ribery, Nicholas Anelka, Diego Forlan and Luis Suarez. Here’s Mexico’s preliminary roster.

My picks to go through to the next round from this group: France and Mexico. Experience will win out and as much as I will pull for South Africa, I just don’t see it happening for them. Uruguay is just too weak in goal.

Next up (hopefully tomorrow): Group B Argentina, Greece, Nigeria and South Korea.

END_OF_DOCUMENT_TOKEN_TO_BE_REPLACED

At least nine fishermen hired by BP to use their boats to help with oil cleanup in the Gulf of Mexico have been hospitalized with serious heath problems, including one who “busted his skull” after collapsing on a dock.

When asked about this clear pattern of illnesses of workers who come in contact BP’s oil and chemical dispersants, BP CEO Tony Hayward callously dismissed the health problems as “food poisoning.”

“I’m sure they were genuinely ill, but whether it was anything to do with dispersants and oil, whether it was food poisoning or some other reason for them being ill,” said Hayward.

END_OF_DOCUMENT_TOKEN_TO_BE_REPLACED

Leave it to the NRO to go the extra mile:

“One final note on proportionality: Fifteen “peace” activists dead is a tragedy, but they represent only one one-thousandth of the death toll of a French heatwave.”

Anyone know how this compares to the violence in Detroit?

END_OF_DOCUMENT_TOKEN_TO_BE_REPLACED

I almost forgot- last Friday my hometown unveiled a new memorial for veterans, and they had a nice little ceremony. My small town has a ton of veterans, and many from WWII and Korea still alive. It was very cool: 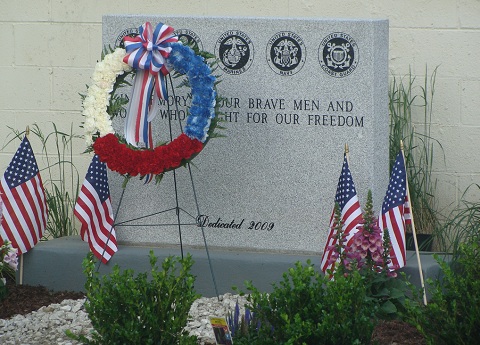 It says 2009 on the stone, but we just got it last week (a touch behind schedule). Thanks to the Women’s Club for the memorial and all their hard work.