You are here: Home / Politics / Domestic Politics / You can always count on Republicans to be dicks

Turns out that a lot of people watched the President’s speech on jobs Thursday night: 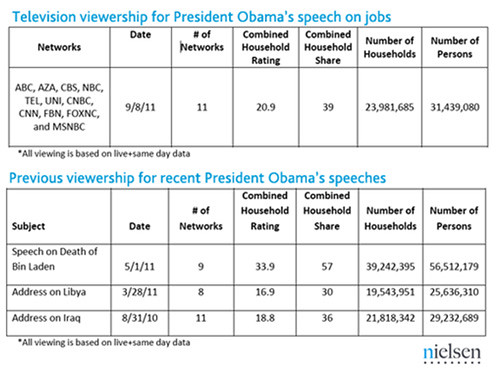 According to the LA Times more folks watched President Obama than tuned into opening game of the NFL season, which drew 27.5 million viewers. The President has given other speeches that pulled more viewers–like his first speech to a joint session of Congress in February 2009 and the night he announced the death of Bin Laden–but some recent major speeches did not have the pull to push through the clutter and get the Nation’s attention. This one did. A big reason why is because President Obama was able to count on Republicans being predictable assholes.

When he announce the speech to be at the same time as the first Rick Perry GOP debate one of two things would happen: either he would talk on Wednesday or the speech would be moved to Thursday. If it was Wednesday the debate would be pushed back an hour and that is what it looked like the outcome would be until Rushbo demanded that Boehner do something about it. In a rapid response to Limbaugh, the Orange Speaker became the first Speaker of the House to refuse the request of a President to speak to Congress. He suggested Thursday and President Obama accepted the change.

This, of course, generated a wave of howls and outrage from the predictable precincts of the left. The wingnuts celebrated and the media played up the controversy. The effect was to let even low information citizens know that the President was giving a major speech right before the start of football–and many of them decided to watch. This resulted in the GOP debate being a less than one day story and the President’s speech dominating the political news cycle–and framing the political agenda for the Fall–even as we head into the 10th anniversary of 9-11 and concerns of another possible attack.

In a post this morning, Steve Benen highlighted a comment from a reader, that pointed out how the outcome would have been different if the Boehner and company had just let the President speak at the requested time:

“I wonder, does the GOP regret forcing the WH to move the date of Obama’s speech? Just imagine if he’d given it the night of the GOP debate. The next day, he’d be splitting the news cycle with Perry and Romney. Now, of course, he’s monopolizing it to the point where even a possible attack on NY isn’t crowding him out.”

Instead, they were predictable assholes about it and allowed the President to use them a foils. Now we are in for a fall where the President and the vast majority of Americans are demanding action on jobs. The President has a plan that will put money in everybody’s pocket, create jobs and help the economy. You can watch the White House’s enhanced version of the speech (with charts and other details) here. This is a well thought out plan and he is daring the Republicans to block it. He is counting on them being assholes. I think when the dust settles he will win this fight, but he will need our help. As Tim F. points out here is how you can get in touch with your Member of Congress and your Senator:

Calling your local Mayor and your Governor’s office might help with the pressure as well.

The message is simple: Pass The President’s Jobs Bill NOW!

Previous Post: « What Fallows Says
Next Post: Eric Cantor Commemorates 9/11 by Insisting on 40% Cuts to Funds Used to Train and Equip First Responders »