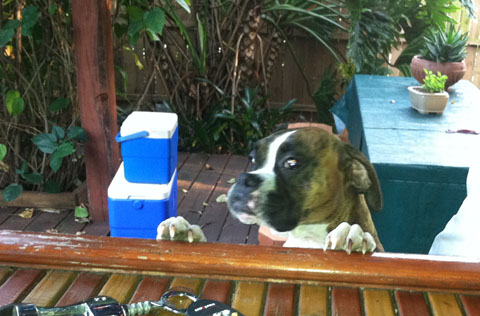 [I think there’s a clause in my Balloon Juice contract about pet photos. This one depicts my dog Patsy, who harbors ambitions to become a biped. She loves to belly up to our backyard tiki bar.

You can see the whites of her eyes because she’s scanning the surface of the bar for pretzels without turning her head far enough to lose her balance. Sadly, there were no pretzels. We now return to our regularly scheduled post, already in progress.]

I have a 13-year-old daughter, which is why I don’t scare easily. She can be a pain in the ass sometimes, but she’s a good person in all the important ways. I’m proud of her and also relieved that I’ve thus far avoided the massive karmic blowback my own mother is gleefully awaiting in compensation for the gigantic pain in the ass I gave her. (Knock wood — and yes, I know, I know: Give her time!)

Anyhoo, as many teens do, Young Miss Cracker seeks to assert her originality by emulating the fashion sense and hairstyles of celebrities. This month, it appears to be Rooney Mara in the title role of the film Girl with the Dragon Tattoo. Of course, Young Miss has never actually seen that film, and I draw the line at allowing her to get real tattoos or piercings or to wear clothing emblazoned with the word “fuck.”

To compensate for these restrictions, she dyes portions of her spiky hairdo vivid colors, achieving a sort of peacock effect. I think it’s kind of cute, and it certainly stands out in our little town, garnering amazed commentary from grocery cashiers to farmers’ market attendants to parents at the little league softball field, which is kind of the point, I guess.

This latter group (little league mombies) has long eyed us warily, ever since asking me years ago what church we attend and receiving a “we’re not religious” in reply. They’re thus unsurprised that I allow my daughter to eschew Bumpits and ponytails in favor of a vaguely Satanic hairdo and god only knows what else. I can sense the clucking and pitying glances thrown my way as I sit stoically in the bleachers during practice, reading a book or scrolling through godless blog comments on my iPhone.

Earlier this week, my daughter and I took it into our heads to teach ourselves to juggle. We found numerous video tutorials on YouTube and selected one that seemed likely. All we lacked were appropriate objects to juggle. After softball practice, we stopped by the discount general store to see if we could find tennis balls. They didn’t have any, but they did have cat toys that would do the trick. We selected three nearly tennis ball-sized ones and three smaller ones.

The lady at the check-out asked us how many cats we have, and we told her we had none and intended instead to use the balls to teach ourselves to juggle. The conversation then took a strange turn: She asked us what we had against pets. We assured her that we adore pets and in fact have two dogs. Then she asked us what we had against cats specifically. I told her I think cats are perfectly lovely, but my husband doesn’t really like them, and that we are basically dog people.

She then launched into a passionate defense of cats, which she needn’t have since I had already told her I have nothing at all against the critters. She implied that people who dislike cats are heartless monsters, which was kind of rude since I’d just told her my husband doesn’t care for them. But I let it pass, grabbed our cat toys and receipt got the hell out of there.

We got home and commenced the juggling lesson. It’s harder than it looks. Our YouTube instructor recommended throwing a single ball in an eye-level arc from hand to hand until it can easily be done with one’s eyes closed before moving on to the next step.

My daughter lacked the patience to perfect each step before moving on to the next, so after just a few minutes of arcing a single ball, she was attempting to introduce a second and then a third, and soon she was chasing them all over the room and trying to extract them from the slobbery mouths of our dogs, who couldn’t understand why we were hogging what were clearly PET toys to ourselves.

Mr. Cracker had been out all morning, and he arrived home to this scene of chaos. When we explained that we were trying to learn to juggle, he picked up three balls and commenced juggling like a goddamned trained circus clown! Not just basic juggling either -– he could do fancy moves too like passing one ball from hand to hand while lobbing and catching the other two straight up and down in perfect synchronicity.

Now, my daughter and I have known this man for 13 and 17 years respectively, and not once has he ever dropped a single hint that he possessed this talent. While it’s true that juggling may not have ever come up specifically, wouldn’t a person who knew how to juggle so well have demonstrated that talent at some point during the course of nearly two fucking decades? Maybe while sorting socks or something?

Our daughter declared that she hated him and stormed off to her room, slamming the door hard enough to rattle the windows. She’ll probably never attempt to juggle again. As for me, I’m left to wonder what else the juggling,* heartless, cat-hating bastard is hiding from us…