Via Paul Constant, #Romneyzingers. My favorites so far are “Ask not what your country can do for you. Ask what your country will bring on the Chinese market.” and “Excuse me sir, but I PAID for this election“….

And at the Atlantic, Alexis C. Madrigal speculates on how “Driverless Cars Would Reshape Automobiles *and* the Transit System“:

When I’ve thought about driverless cars, which if you believe Sergey Brin, will be available within “several years,” I’ve tended to think of them as a drop-in replacement for our current automobiles…

But maybe that’s not what would happen at all. Changes in transportation technology have tended to be accompanied by changes to transportation systems, too. Long-time technologist Brad Templeton argues that this will, in fact, be the case. And he’s even got an idea of what the big shift might be. We could enter the age of the “whistlecar.” If one can hire a cheap specialized ‘robotaxi’ (or whistlecar) on demand when one has a special automotive need,” Templeton writes, “car users can elect to purchase a vehicle only for their most common needs, rather than trying to meet almost all of them — or to not purchase at all.”

This vision is kind of stunning: imagine the Kiva Systems logistics robots that now speed around major warehouses, but for people. Transportation-as-a-service models could really take off in a world of hyperoptimized robotaxis. Not only would the robotaxis be built differently from normal cars, but people’s private vehicles (if they had one) would change as they realized how they could use the new system more effectively….

Templeton’s theorizing could also answer some of the critiques from transit-oriented environmentalists who see driverless cars as perpetuating the doomed auto-heavy American system. Don’t think about the driverless car as a fossil-fuel powered car replacement; think of it as one mode of a radically more efficient system: what could you do now within a system that now has free-floating semi-autonomous people transporters? …

Apart from rude japes and futuristic speculation, what’s on the agenda for the end of the weekend?

END_OF_DOCUMENT_TOKEN_TO_BE_REPLACED

Not sure where everyone went today.

END_OF_DOCUMENT_TOKEN_TO_BE_REPLACED

Apparently, the reason Paul Ryan has never released any details on how his bold and serious plan to gut medicare and shower tax cuts on the rich would also cut the deficit is because the math would take to long to explain:

WALLACE: So how much would it cost?

WALLACE: No no, I’m just talking about cuts. We’ll get to the deductions, but the cut in tax rates.

RYAN: The cut in tax rates is lowering all Americans’ tax rates by 20 percent.

WALLACE: Right, how much does that cost?

WALLACE: But I have to point out, you haven’t given me the math.

Ryan: No, but you…well, I don’t have the time. It would take me too long to go through all of the math. But let me say it this way: you can lower tax rates by 20 percent across the board by closing loopholes and still have preferences for the middle class. For things like charitable deductions, for home purchases, for health care. So what we’re saying is, people are going to get lower tax rates.

Just how long is it going to take to explain the math? Some of us have been waiting over a year since it was released.

And again, shame on anyone out there who ever looked at the Ryan plan and called it bold or serious. It was obviously a ridiculous fraud from the moment it was released, and only really dim bulbs would say anything to the contrary.

END_OF_DOCUMENT_TOKEN_TO_BE_REPLACED

So apparently the Romney campaign has decided that the path to the White House includes taking on… Lyme Disease: 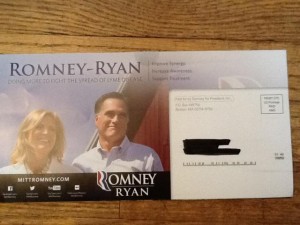 Not to be outdone, Gary Johnson wrote hand-written letters to both libertarians in Virginia and promised to take on the stubbed toe epidemic.

END_OF_DOCUMENT_TOKEN_TO_BE_REPLACED

I really liked this piece from The Monkey Cage on the whole 47%, makers versus takers belief on the Right. I like it because the writer accepts the Right’s stated belief that there are makers and takers, and then simply asks, even if we accept the premise, who are the takers? How many of them are there? What do the 47% do all day in this country, anyway?

But the discussion of dependence on government is at the heart of the Republican case against Democrats and is fully consistent with the “maker vs. taker” theme that often shows up in Republican campaign rhetoric. On this point, Romney was not off-message, likely making this part of the argument more central to the ongoing dynamics of the campaign. The Republican line is that there is a large group of takers in American society – Romney’s initial estimate was 47%. Here, I attempt to gain some empirical leverage on this question using information about work experience, receipt of government benefits, and demographics from 2011 Current Population Survey March Supplement microdata.

The bottom line here is that there aren’t that many takers in America. The most restrictive definition pegs the percentage of takers at 2.4%. If we’re willing to include people in households with at least one earner, that number increases to 5.2%. Lots of people, even quite rich people, receive government benefits in the United States, and that is a reasonable thing for true fiscal conservatives to be frustrated about. But these numbers simply don’t line up with the rhetoric of a massive class of lazy people taking advantage of the rest of us while eating solely at the trough of government.

Finally, it’s worth pointing out that these are really upper-bound estimates. Being a taker involves motives as well as work and benefit status. Takers, so the argument goes, feel no responsibility for themselves and believe that they are entitled “to you name it.” The CPS data don’t allow us to examine motives, but if we could, we would likely find even fewer takers.

The writer never tells us if he buys the makers versus takers argument in a moral or ethical or ideological sense. I could make a solid guess (he doesn’t) but I don’t have to. Instead he just looks at the claim and takes it apart, and in the process he tells us something real and true about the actual country we live in, rather than the country Mitt Romney and his donors imagine when they’re up nights seething with resentment against half of their fellow citizens. He introduces us to the real 47% and tells us what they might be doing all day. They’re making. They’re not “making” in the cramped narrow sense that conservatives would have us believe is the only “making” that matters. They’re at all different points in their lives, and some of them aren’t making enough money to pay federal income taxes because they’re students, or low wage workers, or retired, or they stay at home and care for others for who can’t care for themselves, and all of these categories are fluid and most of them change. I’ve been in a few of the much-maligned “taker” subsets myself-low wage worker, student, unemployed and looking for work, and stay at home mother- at one point or another in my life. Nearly everyone has.

Just think about that when we’re told tomorrow on the morning shows that Mitt Romney is a “numbers guy” and Paul Ryan is a “wonk”. Forget about ideology or ethics or what conservatives value as “work”. Both Mitt Romney and Paul Ryan accepted the factual basis of the makers versus takers argument they promote without ever looking into it at all.

END_OF_DOCUMENT_TOKEN_TO_BE_REPLACED

Any predictions on what form Romney’s much-heralded zingers will take?

What are your guesses?

END_OF_DOCUMENT_TOKEN_TO_BE_REPLACED

As he repeats numerous times in this video (from Steve B), Bishop Thomas J Paprocki isn’t telling you who to vote for – that would endanger his tax free charitable standing. He’s just saying that Republicans don’t like abortions or gay marriage.

He’s not telling you that victims of child molestation are evil and should be punished. He’s just saying that “the principal force behind these attacks is none other than the devil.”

And, he’s certainly not advocating rounding up and locking up Muslims. He’s just saying that airport security personnel are wrong “for not profiling Arabs” and warning that “Muslims could impose Islamist values in the United States if they keep moving here until they reach a majority.” Also, too:

This year, on the 10th anniversary of the Sept. 11 tragedy, some U.S. dioceses held interfaith observances. But not in Springfield, where diocesan services were ecumenical, open only to Christians.

“There wasn’t any conscious decision on my part – I never had that conversation, interfaith versus ecumenical,” says Paprocki.

So when I say, fuck Thomas J Paprocki, and note that the world would be a better place if assholes like him were in jail for conspiring to shield child molesters instead of preaching the hate and divisiveness that spontaneously escapes his geriatric piehole, I’m not making a conscious decision, I’m just saying.