Things have gotten complicated in the past decade.  The first round of complication was the proliferation of high deductible health plans and their attendant health savings accounts.  This was a single add on so an HDHP PPO 2000/4000 was still comprehensible and reasonably straight forward as deductible applied to the well baby visit as well as the emergency room visit.

Now,the insurance triple slash is almost useless and a new language needs to be developed.  How do we desciber a HIA HSA embedded deductible limited network PPO with non-cost share EHB 2000/4000 in a manner that makes any sense to a consumer at a glance?

PPACA has made the landscape far more cluttered. The major changes from PPACA is the creation of non-cost sharing preventivebenefits which includes contraceptives, vaccinations, annual PCP and ObGyn check-ups, pediatric dental and basic screenings for a number of chronic diseases.  The second major change is the nature of deductibles and out of pocket maxes.  Previously prescription drugs and dental/vision services tended to have their own counters seperate from  the medical out of pocket dollar counters.  Now all medical costs for prescription, major medical and essential health benefit vision/dental are blended together into a single out of pocket dollar counter. This change is not as descriptively disruptive as the creation of the non-cost sharing services.

Non-cost sharing preventative services are the major change as it is quite plausible for a person to use, in the first week a policy is active, $978.24 in contracted rate services (what the insurance company pays out) and have a total of $33.18 apply to deductible and out of pocket maximums.  This is a good thing if a person gets a number of catch-up vaccinations, an annual PCP and OBGyn visit and several screenings performed.  It should improve their long run health and decrease long run system cost, but the language of plan design, deductible, out of pocket max fails.

This is a problem because the short hand applied to both Exchange plans and group sponsored plans implicitly discourages utilization of the non-cost sharing but high value added services as it implies that all services are cost shared services. This is most notable on Bronze plans where the argument (rightly in my mind) is a $5800 deductible is a massive incentive against either buying insurance in general OR using it for anything short of getting hit by a bus is strong but misleading because that deductible only applies to cost shared services and not the preventative services.

I’m not sure how to fix this problem.

END_OF_DOCUMENT_TOKEN_TO_BE_REPLACED 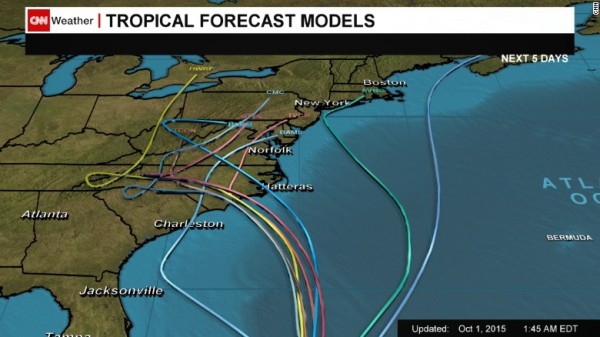 This seems like a good time to share favorite weather apps and sites. Yesterday, valued commenter Lee shared a link to the Plymouth State Weather Center site. Of course, the National Hurricane Center site is indispensable for storm watchers — as fine an example of our tax dollars put to good use as you’ll find on the web.

I’m also partial to the Central Florida Hurricane Center site, which not only has maps and data but links to meteorology blogs, where disagreements over forecast models can get every bit as ugly as a firebagger-on-freeper flame-war.

For mobile radar, I can’t praise MyRadar highly enough. It’s available for free in both iOS and Android flavors, and you can choose the layers you want to display. Here’s my iPhone screen with wind direction, clouds and radar: 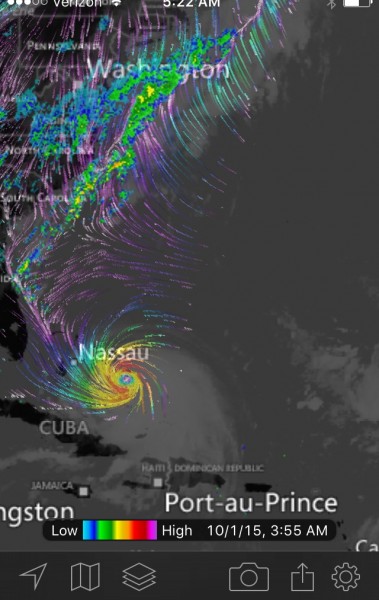 I picked a great time to drive from Florida to the Carolinas! What are your favorite weather apps and sites? Open thread!

PS: If you missed Cole’s Vegas essay from late last night, do yourself a favor and read it now. It’s so good I’m reluctant to post over it. But time marches on.

END_OF_DOCUMENT_TOKEN_TO_BE_REPLACED

I’m beat up and taking the night off. I was supposed to go see Absinthe tonight at Caesars, but we rescheduled and are going to go tomorrow night. Both my colleague and I are just tired and worn down, both mentally and physically, and I think a night of rest will make the last day here much more enjoyable. I need some college football, a couple scoops of ice cream while sitting in the hot tub, and then a good night’s sleep.

I’ve been disoriented since I got here, and somehow I feel as if being drunk the whole time would actually be easier on the body. I don’t know why the town is laid out the way it is, but I always seem to be going north when I feel like I am going east, south when I am going west, and so on. Back in the hills and hollers, I always know which direction I am facing. You could spin me around in circles while blindfolded, take off the mask, and I’d be able to point you north with no problem. Out here, I’m as clueless about my bearings as a groundhog placed in the middle of a concrete parking lot.

The sun and the oppressive heat set the tempo of the all out assault on the body that one receives in Vegas, and when you seek respite from that, the neon lights and glaring tv screens and clanging casino machines and speakers blasting music from everywhere take over. Your body’s defense is to dull the senses, to tune it all out, to instinctively attempt to shield yourself from the multifaceted antigens that are just trying to crush you. People come to Vegas to escape reality, and when here they drink to escape the surreality of Vegas. In the military, they allegedly break you down so they can build you back up as a better soldier. In Vegas, they break you down so you can become a better consumer.

It’s a vicious feedback cycle, Vegas is. The everythingness of it all wears you down to the point that the only way you can feel or sense anything is with BIGGER, LOUDER, FLASHIER. You gotta drink more, eat more, bet more, the music has to be louder and the cars have to be faster and the towers have to be taller and the jokes have to be raunchier and everything has to be more, more, more, because you’re so out of touch with yourself and actually feeling that you can’t actually feel anything at all. After a couple of days here, spending six bucks for a cold bottle of ice water seems to make sense. Think about that. I’ve been down this road before with my struggles with the bottle and I know what I am dealing with- it’s been noted before that Vegas is the drug, and it is only now at this stage in my life that I think I really understand what they mean.

In a sense, the optical illusion of the surrounding mountains makes this a fitting location for this splendid little decadent shithole in the desert. Unlike the mountains, which are enormous but look small from a distance, Las Vegas seems big until you really look closely at it and see the sad smallness of it all. It’s basically a gaudy shopping mall in which the best selling item is regret.

I think I’m going to have to come back again.