I’m up very early this morning, as I somehow got my arm wedged underneath me and woke up with my shoulder throbbing. I just gotta make it a couple more years and I will get that second surgery. Like I noted on twitter, the thing about getting older is that by the time you finally get the mind working somewhat right all the other parts need to be replaced. Sigh.

At any rate, because it is quiet and Steve isn’t bitching and the dogs aren’t barking and the tv is off and the phone isn’t ringing or beeping notifying me I have an email I need to address, I get to think, and started to reflect on this election cycle and how I feel. It’s just been a long, horrible, awful election cycle. It’s the first election I can remember where I was not glued to the tv. I was too stoned and drunk and busy majoring in lacrosse, the grateful dead, the fraternity, and sorority girls in 1988 to pay much attention to politics, but in 1992, I got out off active duty in the summer, and as a new freshman planning to major in political science, I was glued to CNN for Clinton/Bush. In every election since, I have just been all in. Until now. There were days when I refused to change the tv to a news channel and didn’t even want to look at this blog. My enthusiasm was for it to end.

It’s a weird paradox- the stakes are higher this election than ever before, and the Republican plan to make us all hate it was killing my enthusiasm, and that was by design. It was just so ugly. And I started to think, where was I eight years ago? Well, right here:

CNN is projecting Obama is the next President.

I am still in shock. This was a damned landslide. It seems so long ago that I was the skeptical one, mocking Obama as the Magical Unity Pony- I think people forget that I was one of the folks who was simply going to support Hillary as the alternative to the GOP disaster.

This is just stunning. This changes everything. He treated us like adults, he converted the skeptics, and now he has a chance to make his mark. I was an Obama skeptic, and mocked him as the Magical Unity Pony, and mocked him “transcending” things. People forget that, I guess.

But now, no more fake nicknames- this is President-Elect Barack Obama. And I am so very, very proud.

The fierce urgency of now. Your next President, Barack Obama: 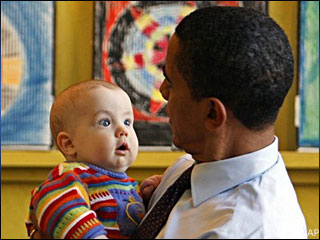 You ain’t the only one, kid.

Eight years ago I was writing that from a hotel in Orlando while at a conference, and it was the culmination of the greatest campaign for the man who I think has been the best President of my lifetime and will probably go down as one of the best Presidents of all time. It was such a rush. I don’t think I will ever feel that way again about a candidate again, although there is a guy named John Fetterman in PA who pushes all the right buttons.

Now this election is not over, by any means. Anything could happen today. But right now I am feeling pretty confident that Hillary is going to win by Obama sized numbers. And what I want you all to keep in mind is that there are millions of people across the country, especially a lot of women, who are going to feel today what I felt eight short years ago. The election of Hillary Clinton will be their Obama. And you know what, it’s not her fault the Republicans and their willing accomplices in the media have dragged her through shit for three decades, and it’s not her fault that the GOP intentionally attempted to destroy the political process this election. Like many of you, my joy at her potential victory tonight will be tempered with a great deal of relief and an equal amount of trepidation for the bullshit hurricane that is coming.

But what you need to remember tonight is that it isn’t about you. It’s about them. It’s about your grandmother and mother, your wife and your daughter, and about all the women in your life who just make things work. The millions of women who have spent their entire lives dreaming of what we hope will happened today. I intend to enjoy it vicariously and to celebrate the election of a mature, decent adult and avoiding the flaming meteor aimed at our body politic.

(This was extra rambling because it was written without the benefit of coffee because I am hoping I can catch another hour of sleep.)

Previous Post: « Tuesday Morning Open Thread: FINALLY
Next Post: And I won’t forget to put roses on your grave »