You are here: Home / Authors In Our Midst / Writers Chatting: Checking In And A New Author

Did you guys know Stacey Abrams was a romance author?!  Could I love her anymore?!

Here’s the book she’s talking about, Rules of Engagement

Okay, onto our regularly scheduled Writers Chatting. I received a request from a new author to highlight his book and I’m happy to do it.  If you’d like me to post your latest book, let me know. I will ask you to write something about your journey and pop in to say hi. 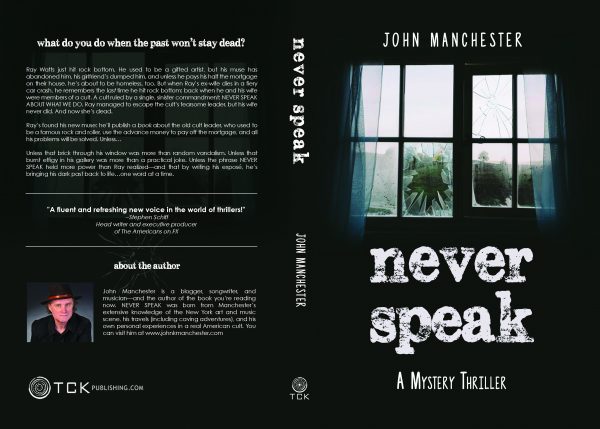 When an ex-cult member speaks out about his former cult leader, somebody from his old life seems determined to silence him by any means necessary. Can he stay one step ahead, or will the truth get buried…and him with it?

Ray Watts is an out-of-work artist living above his struggling gallery on the funky-chic side of Hudson, New York, and he’s just hit rock bottom. His muse has abandoned him, his girlfriend’s dumped him—and unless he pays his half of the mortgage on their house, he’s about to be homeless too.

But when Ray’s ex-wife dies in a fiery car crash, he’s suddenly reminded of the last time he hit rock bottom—of a time long ago when he and his wife were members of a cult. A cult ruled by a single, sinister commandment: NEVER SPEAK ABOUT WHAT WE DO.  Read more here

And John shares a bit of his publishing story here:

Four years ago, I’d completed two novels in a mystery/thriller series. There was a lot of media buzz about self-publishing, and I was on the fence as to whether to go that way or hold out for a traditional deal. Over the months that I hemmed and hawed over my dilemma I sensed that the golden moment for self-publishing might have already Everyone and his aunt seemed to be slapping a book up on Amazon. Book rankings on their site had swollen past 10 million. Self-publishing my novel and hoping to get any attention felt like casting a grain of sand into the Pacific and hoping anyone would notice the ripples.

So I held out for traditional publishing. And I’m pleased to announce that my first novel Never Speak will be released by TCK Publishing on January 29th, available in print and e-book format here.  How it got there can be read either as a tale of remarkable persistence or pathological obsession.

I was lucky to have an agent, except I’d inherited him from my father. I’d been with him ten years with nothing to show. He took my first novel around to publishers. The effect was akin to that grain of sand in the sea: the sole response, from one editor was “clever.” I liked this agent personally, but it was time to move on.

I pulled on a handful of agent connections with no luck. So I began work on the dread query letter—a single page designed to entice the interest of editors who receive thousands a year. One agent brags of signing 4 authors yearly out of 20,000 queries. Those are terrible odds. I’m not the only writer who’s found this one-page letter more difficult than writing a book.

I got up every morning for a month and wrote a letter. I waited until afternoon, read it then threw it in the trash. I googled “query letter editor” and found a woman who seemed nice and not too pricey. After seven drafts back-and-fourth I began to wonder if maybe the trouble was not with the letter, but with the book itself. I hired this woman to edit the whole book. Meanwhile I sent a copy to an old friend who’s the most successful writer I know to see what he thought.

I took many of my editor’s suggestions, mostly about “show don’t tell” and adding what she called “action beats”—physical scene material that keeps characters from being disembodied talking heads. A few days after I got the finished edit back my old writer friend sent me a ten-page email critique of the pre-edited manuscript along with an apology for its lateness (he was working on a movie.)

The critique hit me at just the right time in my process of learning to write. Like all useful criticism, his points resonated inside in a series of “aha” moments. But this wasn’t nit-picking stuff. It went to the heart of the story. I re-wrote the entire book.

Armed with a new and twice-improved manuscript I hit the query letter again and crashed into the same brick wall. I hired a new query letter editor. Nine months into the process I finally had a letter I could live with. My new editor also took a pass at the first fifty pages of the manuscript. The new draft hadn’t been edited, and if you get interest from a publisher they often want to see the first chapters. I took my editor’s suggestion of planting a hook at the end of the first chapter.

Using the free resource  QueryTracker, I queried 130 agents in the mystery/thriller genre. Rejections poured into my email every day. But over a few weeks I got over 15 “requests for the manuscript.” I was psyched. But then rejections of the full manuscript started rolling in. That was hard. But two months into the process I got my agent. And as they say, it only takes one.

Evan Marshall  has the knowledge and skills you get from 35 years agenting. He’d signed me on the basis of my second novel, but after reading the first we decided he should take it out to publishers who didn’t see it the first time. I’d done a complete re-write, tearing it down to the studs, and it was a much better book.

Now rejections from publishers came in my email once or twice a week. Most seemed like form letters.  After several months I was losing hope. Meanwhile I completed a third book in my series. Evan was thrilled by it. When he sent this book out we got personal responses. Most took the form of “While this is compelling I don’t like that.” There was no consistency to the complaints—they didn’t like the characters, or the story, the pacing, or the writing.

These responses were clearly an improvement over the past, but something about getting so close got me crazy. With each rejection I felt my confidence as a writer sink a little further.

And then came TCK. They’re a new breed—a digital publisher. I won’t see my books in Barnes and Noble (if that’s still even a thing.) But I have a three-book deal with TCK. They provide full editing services. They’re experts at marketing using the Amazon machine (and believe me, it’s one complicated beast.) I’m still going to have to do a lot of marketing myself, but these days that would be true if I were with a traditional publisher. And the TCK royalty split is better than with the traditional outfits.

There’s a ton of info online about how to get published, and lots of best-selling books about how to write a bestseller. There’s good advice and bad, and much that falls into the category of “a little knowledge is a dangerous thing.”

But when it comes to pursuing writing and publishing, there’s a single word of advice that alone will take you most of the way to wherever you want to go.

John and his blog are at http://johnkmanchester.com

So how is every doing on their writing these days?

I’m two-thirds of the way through the second book in my trilogy and about a quarter through the first book of another series. Going from just writing casually to being committed to these projects and setting serious writing time has been a big shift for me.  Still plenty of crippling self-doubt.