You are here: Home / Civil Rights / Women's Rights / A Woman's Place Is In The House / Wednesday Morning Open Thread: The Long Game 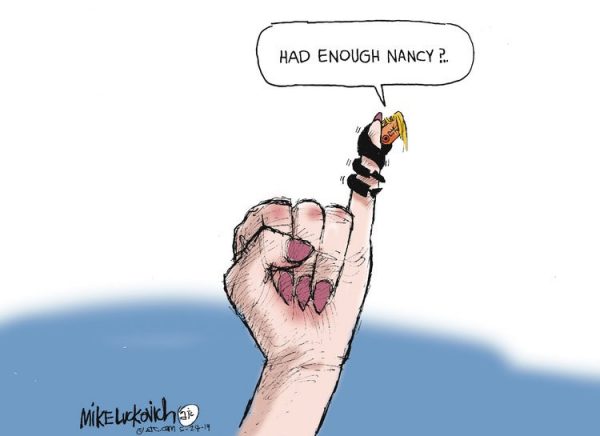 There is something about House Speaker Nancy Pelosi (D-Calif.) that allows her to unnerve President Trump as seemingly no one else can.

“I pray for the president of the United States,” she said on Thursday. “I wish that his family or his administration or his staff would have an intervention for the good of the country. Maybe he wants to take a leave of absence.”

The proof that she had hit the giant bull’s eye of Trump’s insecurities was his response: “I am an extremely stable genius.”

Exchanging insults with Trump is not an endeavor that is normally productive, as many others who tried it have found. But Pelosi is a dangerous foil for a president who operates on impulse and outburst. While Trump succeeds in making everyone else around him dizzy, Pelosi’s unique talent is an ability to keep her focus on the endgame.

Her current goal is to assure that the president vacates the Oval Office, as swiftly and as surely as possible.

That means Pelosi must do two things at once: Keep Trump off balance, and restrain those within her Democratic caucus who are urging a precipitous drive toward impeachment.

Pelosi knows that unless and until there is overwhelming, bipartisan support for such an effort, it will end with Trump’s acquittal in the Senate. And that would only help him win another four years in office. “He wants to be impeached so he can be exonerated by the Senate,” she told top Democrats in a private meeting. “His actions are villainous to the Constitution of the United States.”

The speaker argues for another course: Continuing congressional oversight and relying on the courts to provide air cover as six different House committees seek documents and testimony from a stonewalling administration. While not as gratifying to those who are eager to begin impeachment proceedings, and who argue that anything less is a dereliction of Congress’s duty to hold Trump accountable, it is the more likely path to defeating him in 2020…

So, in the end, I don’t think Pelosi is fundamentally opposed to an impeachment inquiry. I think she wants it on her terms, on her timetable, and only after Trump behaves so badly that he shifts public attitudes, much as he did during the shutdown. 6/

Because, Jay, it is unreasonable to ask why Democrats are not rushing into the trap you’re hoping they’ll spring. I hope they’re going to impeach, but I understand if they’re not willing to do it on your schedule and for your reasons. https://t.co/IXekyJbTRq

I may have to stay away from Twitter if I continue to be so annoyed that so many people are insisting that if we try to find out number of hostages, hostage takers, floor plan, etc., vs having the hostage rescue team barge in immediately, that we reward hostage taking.

Glad to just hear @ezraklein describe Pelosi as not opposing impeachment, but letting things play out to see if support would fade or if it will grow, & that she’s pushing him in ways that will build support.

I do think the House should move toward impeaching Barr.

A quick one on how narcissists respond to ego injury.

Nancy Pelosi implied Trump is unwell and in need of an intervention.

Trump immediately responded with a bizarre, clumsy, awkward insistence that it’s actually Pelosi who isn’t quite all there.

It is likely Trump knows fully well he is indeed losing a step – and also knows Alzheimer’s runs in his family – and is terrified not of his declining faculties per se but of the inevitable loss of esteem he’ll suffer if that becomes known.

Sorry but @SpeakerPelosi had this idea first! https://t.co/BhOcJCAthN

On the Road and In Your Backyard
Next Post: Mueller Statement at 11 AM ET »