Is this a good time for a site update?

Those of you who aren’t sick in bed (or rocking in the corner because of current events) may have noticed the site behaving a bit better than it had been.

We made some programming changes on Friday, and the issue isn’t entirely resolved, but we’ve gone 36 hours without the 502/524 issue occurring, so that’s encouraging.

In addition to the programming changes made at the end of last week, we asked the front pagers to only log in to WordPress when they were creating or editing their posts.  What was the reason for that? It’s because there are things that WordPress does in the background when someone is logged in, and they were contributing to the problem – even if the person has walked away from their computer or has left for the day.

Anyway.. that was Phase 1, and the purpose was to provide a baseline to evaluate the programming changes that were made.  Phase 1 ended a few minutes ago.

Phase 2 starts right now, where it’s actually helpful if front pagers stay logged in!  That way we can evaluate the impact that 15 people being logged in to WordPress has on the 502/524 issue.

So it’s quite possible that we could see an increase in the frequency of the 502/524 error.  Or we might not!  What’s important for you to know is that it is not necessarily a bad thing if that happens.  Yes, it will be an inconvenience for that 20 minutes.

But either way – whether the frequency increases or it doesn’t – that will tell us a lot about whether login habits have an impact on the 502/524 error, now that some programming changes have been made.

It’s also true that posting was extremely light this weekend, and traffic probably won’t get back to normal until everyone is back to their regular schedule after New Years, so that’s another variable.  But that’s not one we can control.

I simply cannot imagine that people would actually read and comment at Ballon Juice while at work, but there are actually people who believe that is true!  Really, they do!

Speak up in the comments if you don’t care to hear about details like this and would prefer more general updates in the future.  And speak up if you do like to know.  As always, we aim to please!

Adding a flower, because it looks so happy, and it’s a very gloomy weather day here. 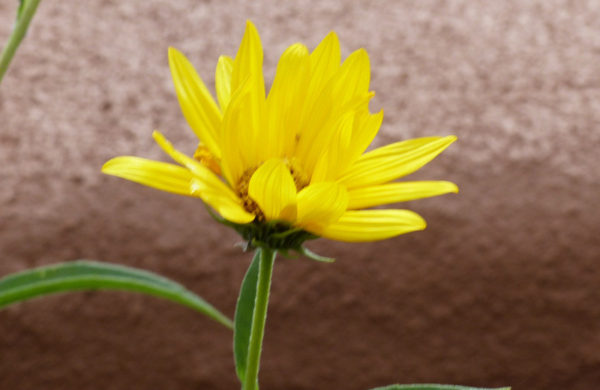 Plus, it’s one more way for you guys to learn about what images show up where.

My tree is the “featured image” and, well, you can see for yourself that this flower is visible in the post.