You are here: Home / Open Threads / Point and Laugh: An Actual Survey on a Pro-Trump Website

This is an actual survey.  I laughed.  Real people actually fall for this and supply their contact information to the Trump campaign.  Unbelievable!

Even this random dog from the idiot things they’re dumb. 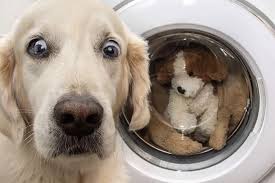 If you feel like it, you can nominate your choice – in the Trump Administration – for each of these three categories:

You only get to pick one for each category, and you are not allowed to pick Trump.