You are here: Home / Archives for Bernard Finel

Bernard Final wrote at Balloon Juice for a year from 2012-13.

Hi, I’m Bernard. John recently invited me to begin posting on BJ, and I am excited to join the team. This has long been my favorite blog. I’ve been known to refresh the page obsessively hoping for a new post from any of the wonderful authors, so this is a real thrill for me.

I thought I’d tell you a little about myself, and what I plan to focus on in my posts.

I’m an international relations specialist. I received my Ph.D. from Georgetown in 1997, and have been in and around academia since. I was the Executive Director of the M.A. Program in Security Studies at Georgetown from 2001-2004, and from 2006 to 2010 I was Senior Fellow and Director of Research at the American Security Project.

I am currently a professor at the National War College, in Washington, DC. NWC is, as you may know, a Senior-Level, Department of Defense school. I’ve heard it described as a “finishing school for colonels,” which is a funny, but not wholly inaccurate description. Anyway, as should be clear almost immediately, my views are my own, and do not reflect those of the National War College, National Defense University, or the Department of Defense.

I’ve written pretty widely on international affairs issues. I’m a generalist within the field, jack of all trades, master of none, but my main focus has been on guns and bombs issues: proliferation, terrorism, use of force. Anyway, all of this is Googleable.

My own interests though are broader than my professional publications. On my personal blog, I spend a lot of time ranting about domestic politics. Like John, I am a recovering conservative. I was a Reagan youth, but have become radicalized over the years both by the increasing lunacy of the American right, and also, frankly, by a fair amount of personal growth on various issues. But I also have to say that a lot has changed in terms of context. Transported back to the 1970s/1980s, and facing the problems of that time — rising crime, the challenge of the Soviet Union, inflation, and so on — conservatism had more virtues. This is something worth remembering, I think. A lot of right-wingers are sociopaths… but at least some are just trapped by the past. Just as many of us remain wedded to the same music and films from our youth, a lot of them are stuck in a worldview dominated by those challenges rather than the issues we face today.

Anyway, I digress. There are a few places where I hope I can make an original contribution to discussion here:

END_OF_DOCUMENT_TOKEN_TO_BE_REPLACED

First, I’ll be spending some time trying to work through both the substance and politics of national security from a progressive perspective. The challenge is obvious. We’re all patting ourselves on the back for finally having a Democratic President/candidate outpulling the Republican on foreign policy issues. But wow, at what cost? Unilateral Presidential war, kill-lists managed out of the Oval Office, and so on. I’m conflicted on a lot of these issues, and I look forward to hashing them out with you.

Second, I plan to write about criminal justice issues, and in particular about what is essentially systemic abuse of prosecutorial powers. The issue of forensic evidence is just the tip of the iceberg. The bigger issue is the use of prosecutorial discretion to coerce guilty pleas. I don’t think most people realize it, but only about 5% of convicted criminals actually got a trial by jury. The other 95% pled guilty. But then remember that roughly 25% of DNA exoneration cases features false confessions. In school we are taught that our justice system is based on the Blackstone Ratio: “better that ten guilty persons escape than that one innocent suffer.” I think it is likely that we are missing that mark by at least an order or magnitude.

Third, and perhaps most important to me, I want to spend some time writing about how tactical political decisions are structurally undermining a progressive agenda. The clearest case is on tax policy. Simply put, Obama’s decision to rule out increasing taxes on anyone making less than $250,000 a year means that, for the foreable future, we’ll be running large structural deficits, and the political debates will continue to be dominated by calls for cuts in social programs. Yes, this may be a winning argument politically in 2012, but look, it means that progressives are doomed to be on the defensive politically in the future. It means we cede the initiative to the right, and that we need to be constantly scrambling to defend whatever program they seek to target. As a matter of long-term strategy, this is a disastrous posture.

Anyway, I haven’t done justice to any of these issue here. I just wanted to give you a little idea about who I am and what you can expect from me. I look forward to vigorous discussions and debates.

Oh, and here is my dog. Teddy is a five year old yellow Lab. Super sweet and completely devoted to chasing anything you choose to throw. 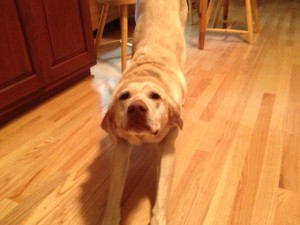