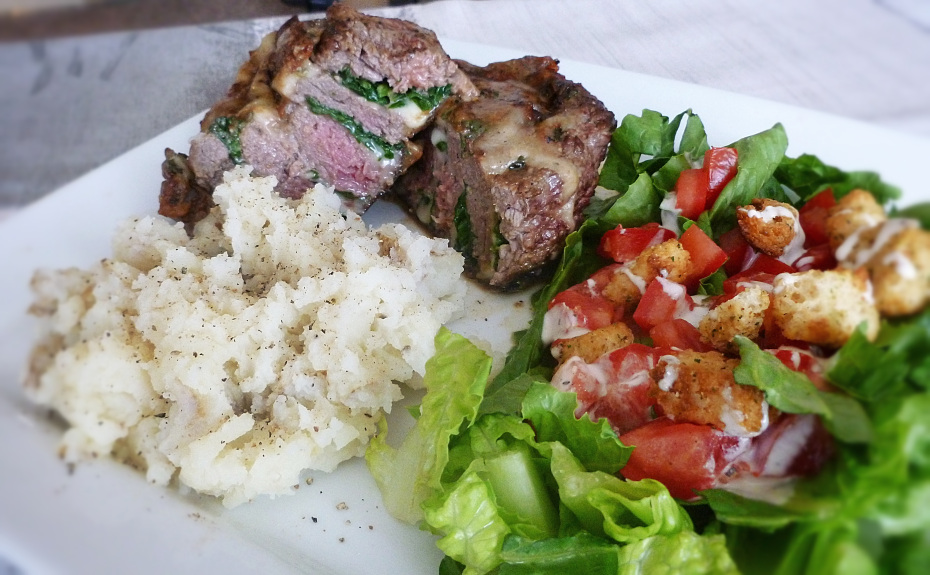 .
From our Food Goddess, TaMara:

These were fun. Not as much effort as it looks. Although I save them for special occasions. The steak can be prepped the day before, just wrap tightly in plastic wrap. Makes it great for a date night, anniversary or small dinner party. I pan-seared and finished in the oven because with the cheese, I thought grilling them wouldn’t work as well. The reward was great pan drippings when I was finished, which I drizzled over the potatoes before serving.

If you’d like something with a bit less work, how about a Spicy Grilled Flank Steak? (Recipe here)

How about you? When you want to make an impression, either for a special dinner for two or a small dinner party, what’s your go-to recipe? What’s more important, foolproof or dazzling on the plate? Hit the comments with your ideas. 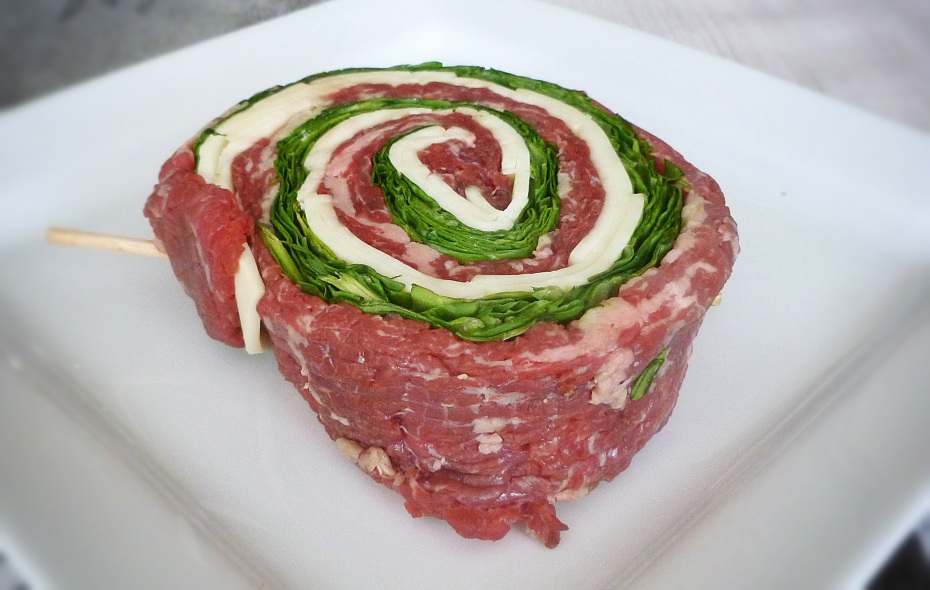 You can ask the butcher to butterfly your flank steak, which is what I did. But it’s fairly easy to butterfly. You want the grain running up and down in front of you and then you’ll slice it in half, NOT slicing all the way through. When you’re done you’ll lay it open, flat, basically making a larger, thinner steak.

Once you have it laid out flat in front of you with the grain running left to right, you’ll want to tenderize it, pounding it flat. I use my pronged tenderizer, so I add the spices first and use the tenderizer to help infuse the meat.

If you haven’t already, once it’s pounded, add salt, pepper and garlic evenly over the meat. Layer the spinach over the meat. You want it to be several leaves thick, because it will reduce as it cooks.

Next layer the provolone cheese slices, two to three slices thick, over the meat.

Now it’s time to roll. Roll tightly in the direction of the grain. Add a skewer every 2 inches and then slice between the skewers, so you have 2-inch thick pinwheels.

Heat 1/2 to 1 tbsp of oil in large skillet, reduce heat to med-high and add pinwheels, flat-side down. After a minute, using the skewer (you may also need a metal spatula to get all the cheesy goodness) flip over, sear additional minute. The usual method of waiting until the meat moves easily to flip will not work with this because the cheese is sticky. So just do one minute each side, it will be fine.

Place the skillet in the oven, turn the oven off and let the steak finish for 10-15 minutes for medium rare. These are thin and don’t need a lot of cooking time and you don’t want the cheese to burn.

Remove to a plate, cover with foil and let rest 10 minutes. You can then use the great juices in the skillet to make a gravy if desired. I just drizzled them over the steak and potatoes right before serving.

My steak made 4 pinwheels. If you have more, you may need to finish cooking on a baking sheet after searing them in groups.