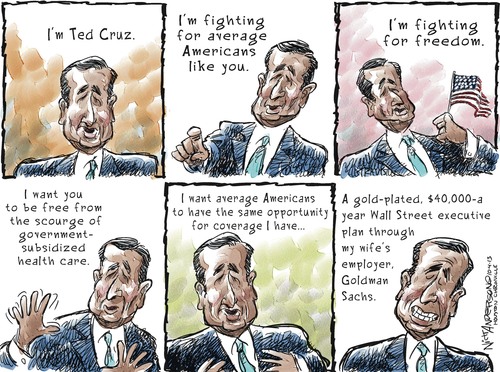 Gail Collins, in the NYTimes:

… Over the past few years, Republicans have terrified their most fervent followers about Obamacare in order to disguise the fact that they no longer knew what to say about their old bête noir, entitlements. Now they can’t turn the temperature down.

Let’s review. Not so very long ago, worrying about entitlements was central to Republican identity. Then, they began to notice that the folks at their rallies looked like the audience for “Matlock” reruns. The base was aging, and didn’t want to change Social Security or Medicare. The base didn’t even want to be reminded that Social Security and Medicare were federal programs…

All over the nation, Tea Party politicians have been telling their most fervid constituents that Obamacare will bring the federal government into the nation’s health system, thus wrecking the wonderful coverage they now enjoy with Medicare. Which comes into their homes through the chimney, where it is dropped by free-enterprise storks.

Representative John Culberson of Texas called Obamacare “a violation of our most sacred right as Americans to be left alone.” This was during an interview with Salon, in which Culberson waxed wroth about the whole idea of any government intervention into health care.

The interviewer, Josh Eidelson, asked, “What does that mean for Medicare, then?”