You are here: Home / Civil Rights / LGBTQ Rights / Gay Rights are Human Rights / Oddly Enough, I Have Been Boycotting Indiana My Whole Life

You’d think these troglodytes would learn that the rest of the world has moved on and won’t stand for this kind of discrimination anymore:

In the wake of Gov. Mike Pence (R-IN) signing a law that essentially allows discrimination against gay and lesbian people in the state, companies are starting to consider pulling their business from the state.

Though Pence has tried to insist that the law is about “religious liberty” and not discrimination against LGBT discrimination in the state, that doesn’t seem to wash with many in the state — including the Chamber of Commerce, which has said the law will bring unwanted attention to the state. Many high-profile companies and entities that host major events in the state are starting to reconsider their business. 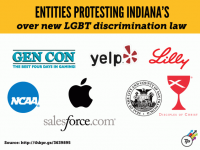 The thing that makes a boycott of Indiana so easy because of this awful bill Pence signed is that no one really wants to go there anyway. And everyone I know who lives there is trying to get out. Indiana is a place you have to go through or fly over to get somewhere desirable (ie: Not Indiana). It’s part of that drive from hell from Columbus to Indiana where you don’t have to turn the steering wheel for hours and find yourself singing to yourself, holding your eyes open ala A Clockwork Orange, and just basically doing anything to stay the hell awake so you can GET OUT OF THE GOD DAMNED STATE. The icing on the cake of the trip is Indiana’s parting gift, Gary, the sweaty, dirty armpit of middle America, a drive through which is like running into a truck-sized pothole full of industrial smog, baked bean farts and indiscriminate gun fire.

And I say that as a West Virginian, which is an oft maligned state.