You are here: Home / Anderson On Health Insurance / New Dems and revisiting Alexander-Murray

Kimberly Leonard notes that this has an interesting intra-caucus tension:

Centrist House Democrats on Wednesday announced they would be pushing for a healthcare plan to shore up Obamacare, only hours after the House's liberal Democrats pushed for a fully government-financed healthcare system. https://t.co/5RqIfk5tnS

An associate jackal sent me the letter which will be below the fold.

Alexander-Murray was a good bill for its context. It sought to address significant concerns and possible concerns. Everything in that bill except for the catastrophic plan section had a straight forward chain:

All of that made sense at the time.

And most of that bill still makes sense. Section 1332 waiver boundaries and rules can be cleaned up. Navigation and enrollment assistance to the states at Alexander-Murray levels would increase enrollment. Section 1333 regulations would be a good thing for states that want to create larger, inter-state risk pools to reduce variance costs. Reinsurance or other forms of assistance would help the non-subsidized buyers.

However as I have argued many times, the termination of cost sharing reduction subsidies is not sabotage. It instead has actually strengthened the market. The cohort of people earning between two and four times the federal poverty level are seeing much lower net of subsidy pricing.

As I noted in October 2017, the world has changed:

Inaction means, over the long run, more people will get low(er) out of pocket expenses/lower deductible insurance for lower premiums through structured, subsidized exchanges. I think that after a year or two, the expected social contract of what “acceptable” publicly subsidized insurance will move to Gold instead of Silver plans. Lower cost Gold plans and very affordable Bronze plans will increase long run uptake of PPACA insurance among people who earn between 200 percent and 400 percent FPL. This is a group with more political power than Medicaid recipients and Medicaid recipients were able to successfully mobilize to defend their interest this year. Appropriating CSR and thus maintaining the status quo is closer to conservative policy and ideological preferences than resetting the effective benchmark to Gold.

There can be good reasons for liberals and Democrats to agree to appropriate CSR. Rep. Pallone’s 2018 HR 5155 appropriated CSR but used the fund flow to expand CSR eligibility and levels as well as expand premium tax credit subsidy eligibility to more people. But the fundamental nature of the ACA has changed due to the termination of CSR and the politics have changed since October 2017 when there was a legitimate fear that not paying CSRs would cause the market to collapse.

But that trade-off has to be made with a recognition of reality. Terminating CSR has created a different market that is more favorable, in isolation, to Democratic policy preferences than Republican policy preferences. The New Dem coalition needs to realize that it was not effective sabotage but a backdoor incidental strengthening. 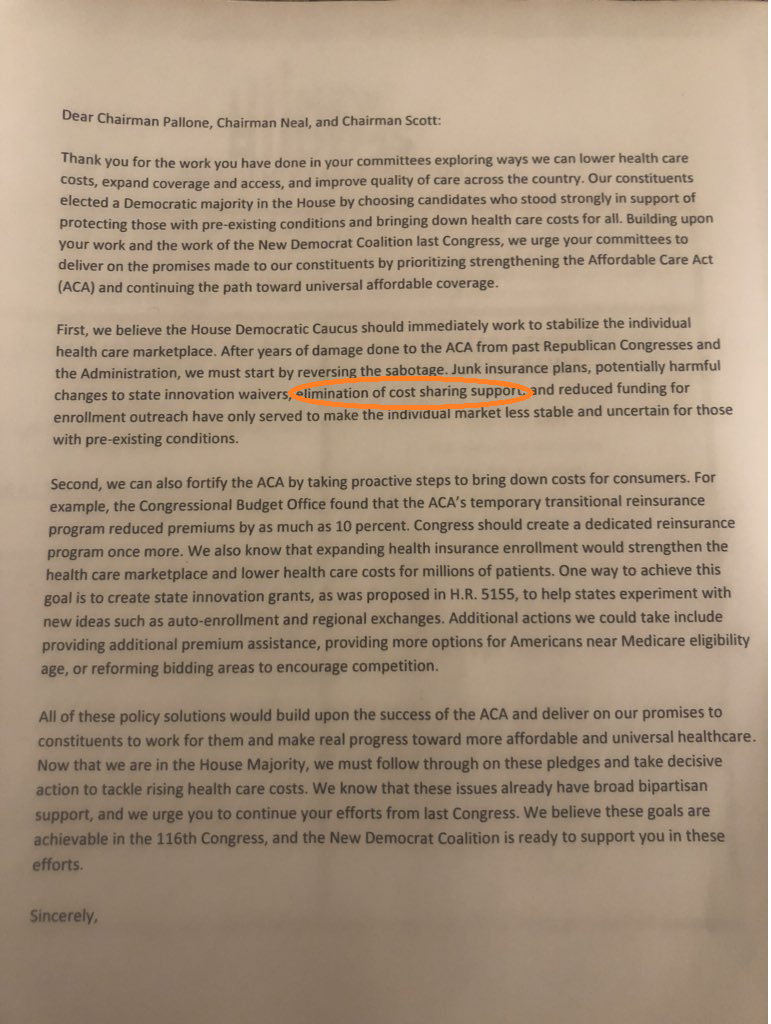