Ok, it looks like my concern about the new site launching very soon is a bit off, sounds like it will be a week or more, not days. I’ve got some submissions, but please do continue to submit pictures, we’re getting closer.

On a personal/political note -fuck Trump, his nationalist anti-immigrant racist agenda, and all the fuckpukes who follow him and ignore his unsuitability to any public office of leadership, much less the Presidency.

I am the son of an immigrant, and my American mother was raised from age 5-14 in Colombia. On her side, I have pre-Revolutionary ancestors, as well as Confederates, to my shame.

My Swiss father had a green card, and never pursued citizenship. After the death of my mother, I was the sole inheritor of the family documents and photographs, many of which were damaged by a house fire in the oughts. I’m still working through them, but I did find a surprise – an letter from my father’s then-employer in 1969 attesting to his interest in becoming a citizen, but that may have been incorrect, otherwise he changed his mind without taking steps. Although he loved many things about the US, he was also attached to some old-world values that he didn’t see in his beloved new home. (If he’d lived into our time, I know he’d have become one of those embittered old men glued to Fox News and listening to Rush Limbaugh, et al., so although I miss him, I’m glad I didn’t suffer losing him to that toxic stew.)

On top of all of that, I was born abroad, in Africa, and so even though I grew up in the States, I’ve always had a slightly different perspective – born in Africa to a Swiss father and an American mother who grew up in Colombia, and so lacking many of the “normal anchors” that people who grow up here from childhood in second or later generation families natively have. I grew up travelling internationally and it shaped me from infancy.

Even though I’m a white guy, I very strongly identify with immigrants of all colors, backgrounds, and religions and thus feel out of place in places lacking diversity. Needless to say, travel, reading, the internet, shortwave, and international media have been important parts of my life and continuing perspective.

These foul currents coursing through our nation make me fear for my sisters and brothers, both here and on the road.

So where did I leave y’all in the last installment? Ah yes, by Arch Rock out in Joshua Tree. Well after I shot my Milky Way Pics I did a bit of light pinting to the loud chorus of Light! by the cockroachs, eh I mean photographers on the ledge. So I re-setup down by some rocks below the arch, which was fine until the guys screeming Light! a few minutes earlier started down though my shot with bright headlamps. After they left, myself and my collegue repositioned ourselves a bit further back, while the new folk up on the ledge crawled to the lower part of the arch to do light painting, ugh. We headed back to the Ryan Mountain Trailhead and noticed some nice rocks along sice of the road near Jumbo Rocks Campground. After getting a shot there, it was on to the parking by the trailhead to get my car for one more location that I had in mind. We ended up stopping a bit short of the location I had planned and finished our shots at Intersection Rock.

A couple of weeks ago, I put up all my On The Road submissions up on my website/store. If you’d like to make one of my shots your very own(suitable for framing), just click on my nym. This group is at https://www.billinglendaleca.com/Galleries/On-The-Road/July-17-2019/i-p5cRKKD.

Let me say at the outset, this was too late in the season to be photographing the Milky Way and Arch Rock. To get a good shot up on the ledge, looking though the arch, it was about a month or two too late. The guys on the ledge were also shooting too early, the light from the sun had not completely disappeared from the sky. Anyway, my colleague and I setup our cameras on the ground below the arch. But as we started shooting the guys started coming down across our frame of the arch and their headlamps shined right into our lens at times. Now I was shooting stacked images so those images were tossed, so I merely had fewer images to stack. My colleague doesn’t shoot multiple images and stack so he was a bit more peeved than I was. While I would normally shoot 40 images(15 second exposures for a total of 10 minutes), I had to settle for 25. I also stacked the foreground from the same images, using the usable shots that didn’t include photographers and headlamps. 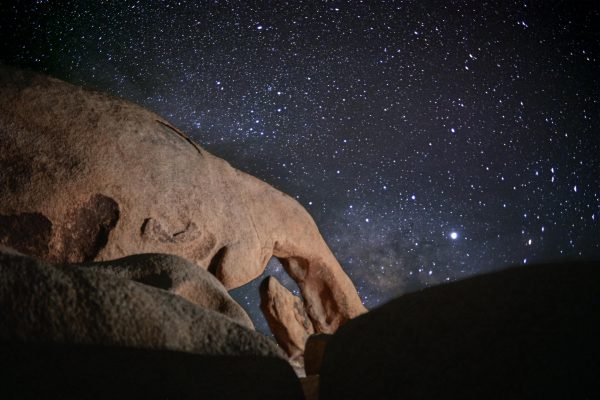 After the frustration under Arch Rock, we moved further back and re-grouped. As we shot this series, a guy decided to climb up into the base of the rock and do some light paint inside the arch. This didn’t have much of an effect on my Milky Way shots, but did adversely affect my foreground shots. Again I tossed about half of my foreground shots. Again the stars are 40 shots @ 15 seconds and the foreground about 20 shots @ 15 seconds. 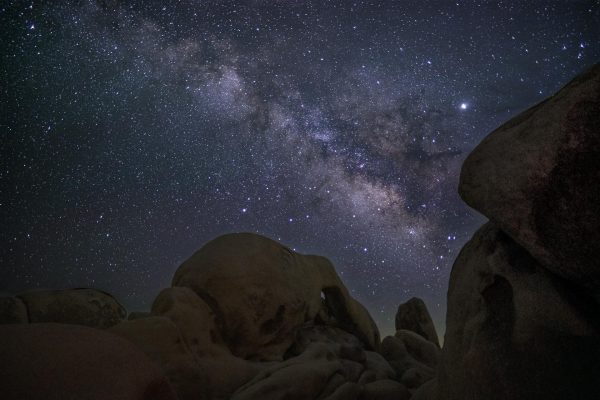 Having seen these rocks after driving though Jumbo Rocks Campground, we decided to stop and try some photos. I found a location with the rocks in the background and a Joshua Tree. I added a bit of light painting on the rocks and the Joshua Tree and this was augmented by passing cars on the nearby road. 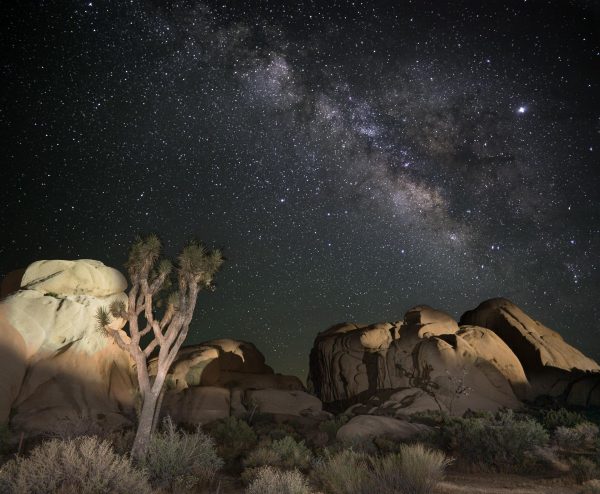 We ended up at Intersection Rock which is a large rock that sits at the intersection of Park Blvd(it runs from 29 Palms to Joshua Tree) and the road to Barker Dam where I shot last month. When we look at the Milky Way, we only see the edges of the galactic core. The center of the galaxy is obscured at least for visible light by a dust lane that called the great rift. Above the great rift(or below in the Southern Hemisphere) is a dark nebula known as the Dark Horse Nebula(you have to look at it sideways. This nebula system has parts know as the Pipe Nebula(the back legs) and the Snake Nebula(front legs and the head) which is by Jupiter in this picture. Again 40 shots @ 15 seconds with light painting on the additional foreground shot augmented by car headlights from Park Blvd. 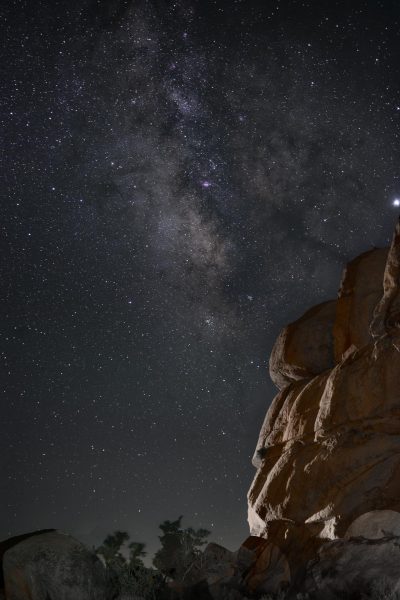 I was shooting a set of final shots with my new Galaxy Camera so I got out the star tracker, set it up and pointed the NX1 at the Andromeda Galaxy(M31). M31 is our closest galactic neighbor(and fellow jackal). You can see it’s two satelite galaxies M32 just to the right and below the galactic center and M110 above and slightly left of the galactic center. When I looked at the shots on my camera they looked a bit out of focus, but once I stacked them the shots seemed to work. This is 20 shots @ 30 seconds. I’ve added the diffraction spikes in post. I think if I shot 40 or 60 shots the plane of stars in the disk would have larger, but I’m pretty happy with this effort. 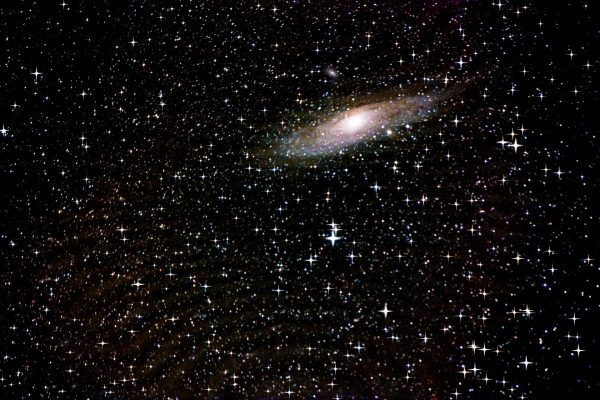