You are here: Home / Healthcare / COVID-19 Coronavirus / We’re on our own

My failed TP run yesterday left me depressed and looking for diversion in escapist projects the rest of the day. I wasn’t sad and out of sorts because I didn’t acquire TP but rather because in my isolated swamp bubble, the magnitude of the disaster we’re experiencing together is ever-present but at a distance. Going into town, seeing the closed stores and the cops lurking in the grocery parking lots and the people lined up and visibly tense as they try to fulfill basic needs, etc., shatters the illusion.

So, among other things, I didn’t check my mail yesterday. This morning, I found this damp campaign mailer in the road in front of my mailbox: 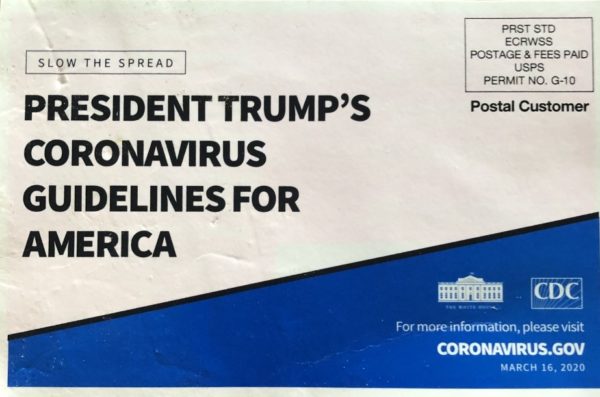 Goddamn, that’s inappropriate. The information on the reverse side is fine — just common sense shit about  washing your hands, blah blah blah, including stuff about social distancing that Trump is already ignoring and undermining.

But for the CDC to plaster Trump’s fucking name on the mailer like a campaign flyer is wrong and also a symbol of how politicized and fucked up the entire government response to this pandemic has been.

Dr. Birx is spinning false hopes, according to one of the epidemiologists whose data she referenced in the “Survivor: Coronavirus” reality TV episode she co-hosted along with Trump last night. An excerpt:

So the scenario Dr. Birx is “assuring” us about is one in which we somehow escape Italy’s problem of overloaded healthcare system despite the fact that social distancing is not really happening in large parts of the US.

That is unlikely. Then the rosy scenario assumes we get to minimal numbers of cases everywhere, develop and maintain testing and tracing capacity, execute well on it, don’t miss imported cases that spark new chains of transmission, and somehow maintain this delicate balance…

For the 12-18 months (best case under current models) till a vaccine. I desperately hope she is right, because much suffering will be avoided. But reassurance that this is likely, or even plausible, with the disorganized track record of the US response, is false reassurance.

We should work our hardest to create the conditions to make the scenarios being described here (one bad wave, contained by social distancing, and we’re down to a point of controllable spread) a reality. Doing so will make us better prepared, even if they don’t come to pass.

But it would be extremely naive to imagine that they are likely, and what do I know, but it seems like bad politics to “assure” the American people that they will come to pass when so many things could go wrong, any one of which leads to much worse outcomes.

Worse even than that, Trump is in fucking denial about the need for ventilators, as he apparently discussed on the fucking Sean Hannity show last night, and he put his smarmy fucking failed real estate developer son-in-law in charge of manufacturing them. Via TPM:

The information contained in this article is obscene. While Americans die in escalating numbers and hospitals around the country announce plans to deny care to those already seriously ill the White House is negotiating with various businesses and joint ventures over producing ventilators. Today a deal with GM and Ventec was put on hold because the White House was unsure whether it was paying too much or whether they’d be purchasing too many and left with extra ventilators there was no need for. The White House point man on this critical life and death effort is Jared Kushner. They’re trying to cut the best deal while people die. It will make you furious and it may make you cry.

Trump struts around calling himself a “wartime president.” Okay, then. Let’s have some war crimes trials when this shit is over.

But because I am an incurable optimist, here’s one hope I have: maybe this real-time demonstration of how government at every level can have a tangible and direct impact on our very lives will finally wake the apathetic up; maybe they’ll understand that hell to the fucking yes it matters who operates the levers of power and that voting is about hiring competent people to do that, not sending a goddamned message.