You are here: Home / Open Threads / This Is America Open Thread: Not All Racists…

People say Trump is a grifter. And he is. But I don’t really think that’s how he got votes.

/3 Well, I’d say, I’m still walking down the street in a Klan shirt, because whatever else he told me, that wasn’t a deal-breaker. 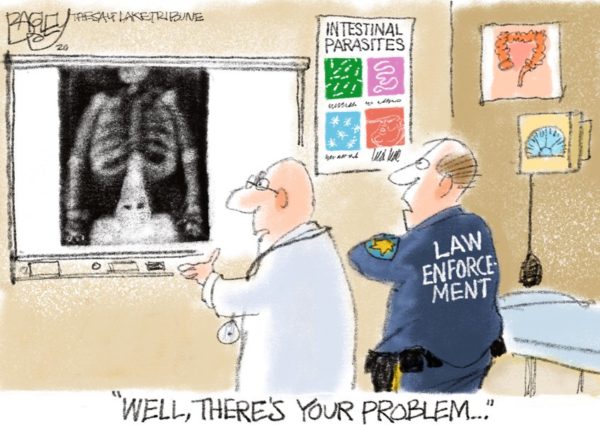 When James Sullivan saw a recent Salt Lake Tribune editorial cartoon meant to illustrate how white supremacy has infiltrated law enforcement, he said he thought it wasn’t just improper and controversial. He said, specifically, that it was racist because it used Ku Klux Klan imagery.

He told the crowd listening to him that that fear is used for manipulation, to make minority communities fear police, to “control the Black vote.”

“It’s not only ignorant and in poor taste, but it is the most racist act, and the most blatantly racist act, that I’ve ever experienced from a media group in the 21st century,” he said, asking the crowd of about 60, “Can everybody agree me on that?”

This is extremely dangerous & inappropriate and only fans the flames of hatred & mistrust. I stand with the Utah Sheriffs Association. The @sltrib & @Patbagley should immediately retract & apologize. https://t.co/VSpk8i2Xtu

The crowd, law enforcement supporters who’d shown up at the Tribune’s shared West Valley City printing press, yelled back in agreement. Some whistled. They’d all rallied on a wedge of grass outside the presses to speak out against the recently published Pat Bagley editorial cartoon they said disrespects and endangers police.

The rally — called “Back the Blue: Boycott Salt Lake Tribune!!” — came together Wednesday after the Utah Sheriffs’ Association and the leader of Utah Business Revival, a group that has held a series of protests against coronavirus restrictions, condemned the drawing.

They called for an apology and a retraction. Rep. Chris Stewart, R-Utah, and the Utah Republican Party has since issued a similar statement…

Fun fact: the group that organized the anti-Pat Bagley protest is behind other events protesting mask wearing