You are here: Home / Organizing & Resistance / Fables Of The Reconstruction / A Novel Strategy for the Disposal of Confederate Monuments (Open Thread) 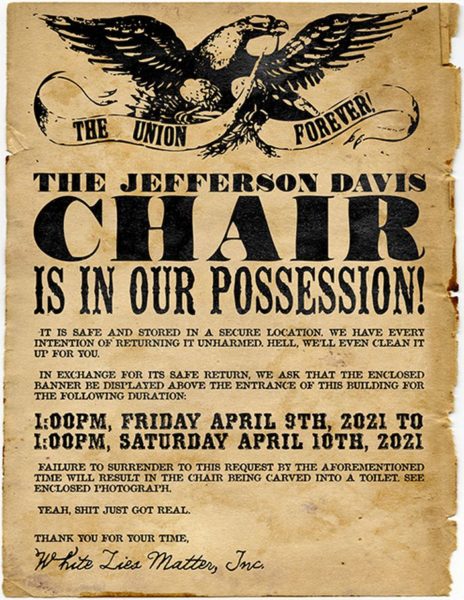 Here’s a bit more on that novel idea to dispose of Confederate monuments that was alluded to by TaMara in the live Biden event coverage downstairs.

The group, White Lies Matter (Inc!), stole a commemorative “Jefferson Davis Chair” that was placed in an Alabama cemetery by the (white) “Ladies of Selma” in 1893. White Lies Matter, Inc. says they’re holding the chair captive to force the United Daughters of the Confederacy (UDC) to post a banner at that organization’s Richmond headquarters on Confederate surrender day, which falls on Friday this year.

The cheeky chair-nappers are threatening to turn the stone throne into a toilet if their demand isn’t met. Via AL.com:

A Confederate monument valued at $500,000 was stolen in March from a Selma cemetery, officials confirmed today.

This morning, a group that claims to have taken the monument, the Jefferson Davis Memorial Chair, sent emails to AL.com saying they will give the chair to the United Daughters of the Confederacy if that organization agrees to hang a banner outside its Richmond, Va. headquarters.

In those emails, a group calling itself White Lies Matter say they stole the chair from the Old Live Oak Cemetery and are demanding that the UDC hang a large banner at 1 p.m. on Friday — the anniversary of the Confederacy’s surrender in the Civil War — and leave it there for 24 hours.

The banner, which the group says has already been delivered to the UDC, is emblazoned with a quote from Assata Shakur of the Black Liberation Army: “The rulers of this country have always considered their property more important than our lives.”

White Lies Matter, Inc. says if the UDC complies, they’ll not only return the chair but “we will clean it to boot.” As proof of life, they sent a photo of the purloined chair in its undisclosed location: 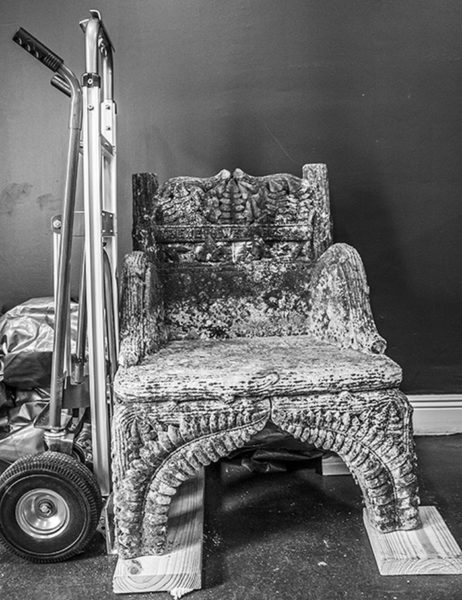 The UDC are not amused but are Trumpish, which is utterly unsurprising:

A woman who answered the phone at the Virginia offices of the UDC said she had heard the reports of the theft and ransom demand were “fake news” and there was no immediate response to an email to the organization seeking further comment.

Selma police and District Attorney Michael Jackson confirmed the theft and said they were aware of the ransom demand.

I kinda hope the UDC doesn’t comply and White Lies Matter, Inc. keeps the chair and turns it into a toilet. I further hope they follow up by sending an update in the form of a photo with the chair configured for its new, infinitely more useful role.

Also, White Lies Matter, Inc. is kinda badass. And they have a sense of humor too. I mean, look at that poster! Open thread!