As I understand it — and I do not pretend to understand football as a sport — the suits in charge of College Football just committed some major ‘realignment’. The stories I’ve seen about this have not been positive. Will Leitch, at NYMag, said that “College Football Is About to Change Drastically — and Not for the Better”.

The Washington Post‘s Sally Jenkins was even less impressed:

The current state of college football is this: Across the nation, paunchy, over-exalted ticket managers who title themselves athletic directors are racing in ungainly circles trying to find a padded, covering seat for their butts in a game of musical chairs. For years they cried that name, image and likeness payments to players would be a threat to the game’s tradition and uniqueness. It’s nothing compared with the destruction wrought by these administrative gluttons, with their combination of treachery and ineptitude, who would give away a century to grab a television minute.

The 100-year-old Rose Bowl is in danger of collapsing into one of those tumbled-down structures you see on the slopes of old Rome while the supposed business geniuses turn college football into something sickish that looks like three different tumors stuck together. They have arrived at a situation in which Stanford, TCU, Cincinnati and Central Florida could wind up clapped into the same distended conference, in which players must take red-eye flights home from games, just so said administrators can claim to be media honchos while covering years of overdrafts…

Because my brain works by bricolage, I immediately flashed back to the most recent SC(R)OTUS sports decision. A recap:

WATCH: The U.S. Supreme Court held that a former public high school football coach’s action of leading prayers with players were protected by his own rights under the First Amendment and said that the Washington state public school district violated the rights of the coach pic.twitter.com/ucrzCADdWP 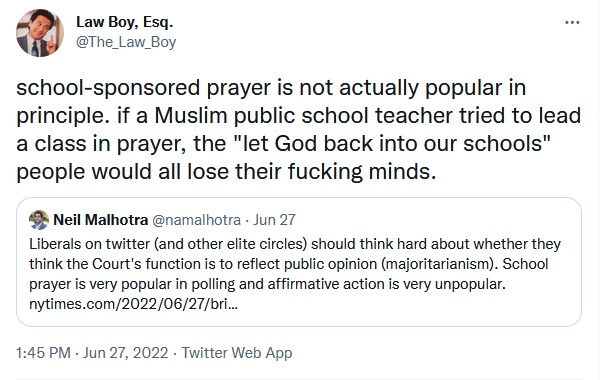 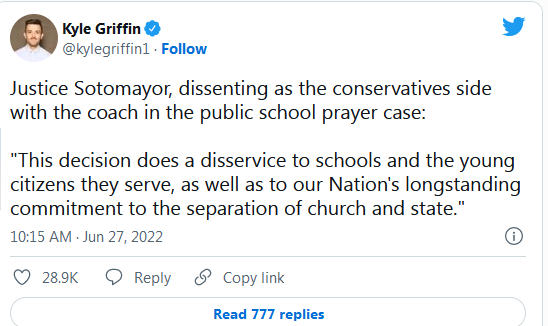 I've never seen this in a SCOTUS ruling before. SCOTUS said that the coach was merely exercising his personal right to pray on the field. Sotomayor literally included a photo in her dissent, to prove that the right-wing justices were lying. pic.twitter.com/5MojGVzf6J 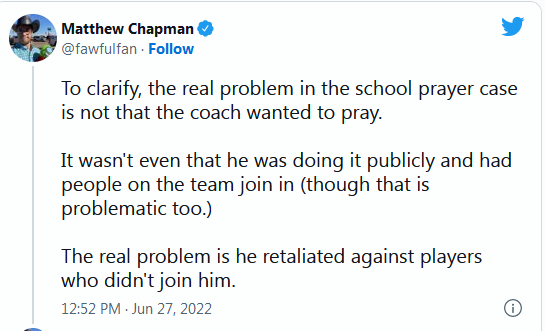 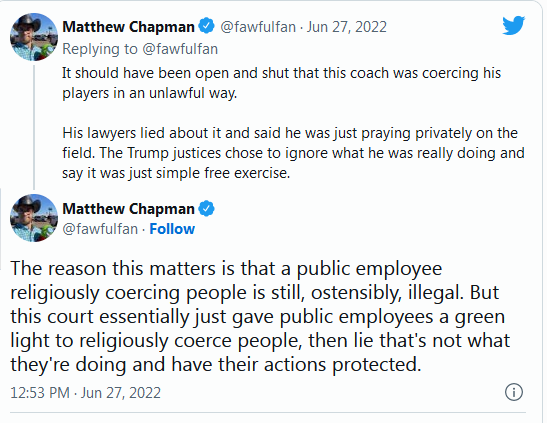 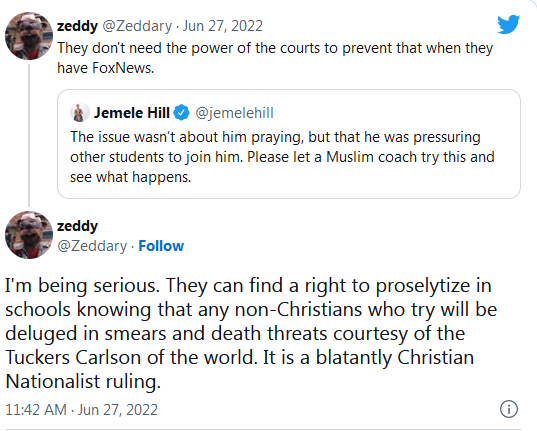 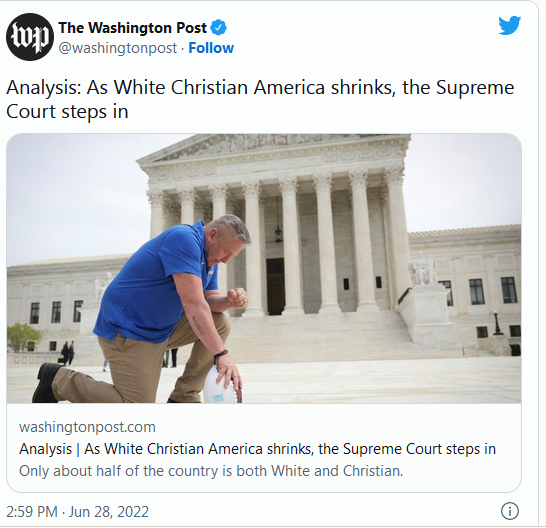 … It’s an unsurprising development from this staunchly conservative (and often overtly religious) court. But it’s one that is worth considering in the context of broader societal trends. The Supreme Court is empowering Christianity as the United States becomes less religious. It’s blurring the line between church and state as Republican officials like Rep. Lauren Boebert (R-Colo.) advocate for religion to play more of a role in politics.

None of this is to say that the Supreme Court is explicitly trying to backstop the power of Christian or White Christian Americans. It is, instead, to again point out that the imbalance in the allocation of power to more rural parts of the country — and therefore more White and often more Christian parts of the country — helped Donald Trump become president and Republicans to secure a majority of the Senate. That, in turn, helped build a robust conservative majority on the court that reflected a sympathy for allowing overlap between government power and religion. And Christianity…

Call me a glass-half-full pessimist, but I don’t think this ‘victory’ is gonna do much to save American football as we know it. There’s also been a recent spate of news stories on the dangers of CTE. I suspect that parents who aren’t completely desperate will be increasingly unwilling to let their kids get involved with the kind of full-contact practices, starting in primary school, that has been regarded as “essential social/developmental training” (… If kids are to progress through the local ‘Friday Night Lights’ school-sports grind, into the college feeder system, which provides the NFL with trained novices without the costly indignities involved with running its own AA / AAA leagues.)

“Nothing against your extremely sincere religious faith, Coach, but I can’t let my kid take the risk of head trauma. Even if he *might* be your winning card against Springfield High, I want him to stay healthy enough to recognize his grandbabies thirty years from now. “

(Of course, the lottery-ticket hopes of those parents desperately dreaming that their physically-gifted child just might be able to rescue the whole family when he turns pro… it’s gonna make the whole system look even more like gladiatorial combat for the entertainment of spoiled couch potatoes…)