Bill Russell & Nichelle Nichols both, quite literally, embodied grace & dignity in the face of not just mere adversity, but outright HATRED for their embodied aspirations, & the palpable NEED for them to FAIL, which they BOTH REFUSED TO DO.
????


"If you can see it, you can be it," the saying goes. Nichelle Nichols gave millions of people the opportunity to see themselves on the frontiers of science and exploration, boldly expanding human understanding.

She inspired so many of us to reach for the stars. What a legacy. pic.twitter.com/Ly2IpmxWiJ

A friend sent this to me and ?? pic.twitter.com/B8kMYlFqu3 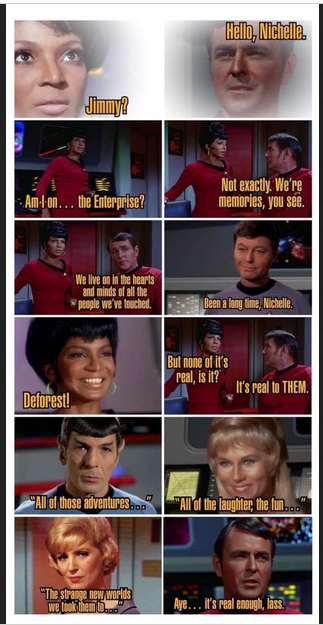 Bill Russell was one of the greatest athletes in our history, and the first Black coach in a major U.S. sports league. Off the court, he used his voice to advance civil rights and social justice. We are a better nation because of him.

For Black athlete activism, Bill Russell is the north star. My latest for @TheAtlantic https://t.co/J6Q5yswSq9

Not many people can make Charles Barkley, the former NBA MVP and legendarily outspoken broadcaster, pipe down. But the NBA icon Bill Russell, who died on Sunday age 88, once called Barkley and did just that.

Russell had seen Barkley on television complaining about how much he paid in taxes. Russell was displeased with Barkley’s comments.

“[Russell] said, ‘Son, let me tell you something,” Barkley said. “‘You grew up poor. You went to public school, and I bet the police came to your neighborhood when somebody called the cops.’ I said, ‘Yes, Mr. Russell.’ He said, ‘Somebody was paying those people, and you didn’t have any money. I don’t ever want to see your Black ass on TV complain about taxes ever again.’ And I never did.”

Russell’s record—11 NBA championships with the Boston Celtics—came to define winning. More than that, though, his fierce dedication to speaking out against racial injustice, his deep sense of integrity and righteousness, has long been considered the gold standard for athlete activism. Today, many Black athletes revere Russell and regard him as their north star…

Perspective: Bill Russell was a fully dimensional Black athlete more than a half century before it was okay to be one https://t.co/G86qjh6g11

… Russell and Chamberlain were among the pioneers in transforming the game into a more vertical show, one in which tall men with astounding leaping ability did unimaginable things in the air. Russell reserved most of his athleticism for practical purposes: rebounding and blocking shots. He combined his physical skill with his mind, studying the manner in which errant shots ricocheted off the rim and developing strategies for when and how to block shots…

In paying his respects Sunday, Michael Jordan said of Russell, “He paved the way and set an example for every Black player who came into the league after him, including me.” When Russell retired from the NBA in 1969, Jordan was 6. Abdul-Jabbar was about to enter the league the next season. Magic Johnson and Larry Bird were 10 years from beginning their rivalry in the NCAA championship game. His heyday with Red Auerbach and Boston’s all-star cast was so long ago, and recency bias has diminished some appreciation of the enormity of his influence. But considering all that the NBA — and sports in general — has become, Russell belongs among a handful of the most significant athletic icons ever to walk the planet.

He was a defining sports figure during a defining time in American history, speaking up during the same era in which Muhammad Ali, Billie Jean King, Arthur Ashe, Jim Brown and Abdul-Jabbar refused to stay silent. Russell was 13 when Jackie Robinson broke baseball’s color barrier in 1947, and he used Robinson’s example as a blueprint for his career. When Robinson died, Russell was a pallbearer at his funeral. On July 19, Russell wrote his last message on Twitter, wishing Robinson’s widow, Rachel, a happy 100th birthday.

Eleven years ago, when President Barack Obama awarded Russell with the Presidential Medal of Freedom, he reflected on the big man’s legacy.

“Bill Russell, the man, is someone who stood up for the rights and dignity of all men,” Obama said during the ceremony. “He marched with King; he stood by Ali. When a restaurant refused to serve the Black Celtics, he refused to play in the scheduled game. He endured insults and vandalism, but he kept on focusing on making the teammates who he loved better players and made possible the success of so many who would follow.”…

From a thread full of lovely vignettes:

"eat my food, sleep in my bed and then go out there and whip my butt and my mother would say 'Now Wilt we shouldn't feed Bill so well next time…'" pic.twitter.com/Atp1A3oF6n

The original cast was really a unique collection of remarkable, talented, and kind people.