For the sake of argument let’s grant Playboy that Rick Santelli’s now famous rant came from an authentic, absolutely genuine outrage that wealthy Republican backers might pay someone else to rant on TV instead of him. Obviously Santelli and the CNBC network would have some egg face but, other than that, who gives a crap? Did Santelli or any of his lame tea parties break out of rightwing blogs? If they did I missed it.

The question boils down to whether Republicans planned this for weeks with extravagant financial backing, in which case they’re out of touch schmucks. Alternatively rightwing activists spontaneously decided that people would rise up against rescuing the economy. That would make them tone deaf schmucks. Rick Santelli obviously has some personal cred riding on the matter. For the rest of us, though, you’d need a degree in yiddish to tell the difference.

This photo (via) will indeed soon eclipse the Moran image as the awesomest summary of rightwingerism ever.

Get a brain, morans

END_OF_DOCUMENT_TOKEN_TO_BE_REPLACED

An almost live action shot from the Tunch Cam™: 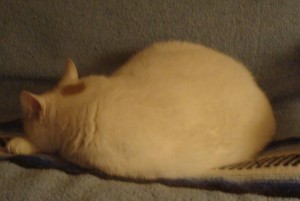 In other words, Saturday night is looking an awful lot like Sunday through Friday night around here.

On to something different, this paragraph in a story about pears confused me:

The Bartlett pear was the principal ingredient of fruit cocktail, which my generation back home had been raised on. But as the fruit cocktail died a well-earned death, the market for the Bartlett pear swooned. And that’s how I got into trouble. I came home and set out to rescue the Bartlett pear market, save orchard farmland from development for tract homes, provide myself with a decent supply of good poire williams, which was impossible to get in Oregon at that time, and maybe make a buck or two.

Since when did fruit cocktail die a well-earned death? I just had some a couple weeks ago. And why would the demise of fruit cocktail be “well-earned?” What is wrong with cutting up a bunch of fruit and chilling it? Is this just a snobby NY yuppie thing? Is fruit cocktail déclassé and I never knew it?

At any rate, doesn’t appear to be much on the boob tube tonight. I am either going to watch “W” on pay per view, do some gaming, or read. Can’t figure out which yet.

Link deleted because I just don’t feel like dealing with 100 morons accusing me of buying into this crap.

END_OF_DOCUMENT_TOKEN_TO_BE_REPLACED

Bankers have discovered the dirty secret of modern finance. If one guy loses a little money he gets fired. If a firm loses a lot of money its position suffers and, if the loss is great enough, the desks and property get sold off piecemeal. But if enough firms make shitty investments and lose enough money, the government has to give out money so everyone can start over!

It really does boil down to something like a hostage crisis. If we don’t fix the regulatory framework to the point that “too big to fail” becomes an anachronism then we will deserve it when it happens again.

END_OF_DOCUMENT_TOKEN_TO_BE_REPLACED

Charles Erwin Wilson, a GM exec who eventually became Eisenhower’s Secretary of Defense, once told Congress “I thought what was good for the country good for General Motors and vice versa” (this is the source of the famous “What’s good for General Motors is good for the USA” expression). I’m no corporatist, but I’ve always thought there was some wisdom in the old-school conservative belief that the well-being of America’s largest employers is inextricably linked to the well-being of the nation.

The days of pro-business conservatism are over now. The US Chamber of Commerce begged Republican Congressmen to support the stimulus package to no avail. Conservatives are actively rooting for the liquidation of automakers and banks, with “Let them fail” replacing “drill baby drill” as a rallying cry. And that’s when they’re not urging us to boycott Krispy Kreme and Dunkin Donuts for supporting the United Pastry Jihad.

A striking example of this was provided by some commentary on a right-wing blog here in Western New York, which mocked a local company for its financial woes. My friend Rottenchester summarized:

Paetec is a local company that employs close to a thousand people. They took advantage of some tax breaks and other incentives, and they plan to move their headquarters downtown. They are having a tough time because of the recession, so they’ve been downsizing their plans.

I didn’t realize that pointing and laughing was the “conservative” response to a company that’s having a hard time, but I guess we’re living in a new era.

What’s left, other than hatefulness and the occasional reference to Edmund Burke?

END_OF_DOCUMENT_TOKEN_TO_BE_REPLACED

More of the new professionalism here (via):

My favorite part of this vicious assault is after he has kicked her, punched her, banged her head off a wall, thrown her to the floor and beaten her some more, they then handcuff her and have her completely subdued, and pull her to her feet. By her hair. And then, of course, perjury being the native tongue for some in law enforcement, he lies about the event in the report.

She is 15. Story here, including what she is arrested for, but really, does that matter?

END_OF_DOCUMENT_TOKEN_TO_BE_REPLACED

It occurred to me that good strategic reasons explain why the Republican party has become sandwich board silly. Let’s run through the institutional advantages that have kept the party afloat until now.

* Money from rich people. Other movements have come and gone, but since FDR established the middle class and poor as the Democrats’ base Republicanism’s beating heart has been the interests of wealthy establishment in America. Too bad for them business executives are often greedy but rarely stupid.

Bob Clark of Missouri and Victor Hammel of Pennsylvania are CEOs of large businesses who tend to back Democrats but also donate to Republicans. Clark runs Clayco, a St. Louis real estate development firm. Hammel leads J.C. Ehrlich, a pest-control company based in Reading, Pa..

They are the types McCain had hoped to attract. Instead, Clark, who raised thousands for Bush in 2000, has raised more than $500,000 for Obama. And Hammel, who regularly gives money to Republican Sen. Arlen Specter, has donated $2,300 to Obama.

“Barack is definitely more liberal than I am,” Clark said. “But I’m willing to compromise on some of those issues for what I think is the greater good.”

Hammel said, “I would rather pay a little higher tax on a higher profit than a lower tax rate on lower profits.“

* Communication. Let’s admit that Reagan and a generation of Republican Congressmenl did an impressive job of selling an agenda that by and large Americans hate. Clinton might have inverted that but Republican strategy and his own weaknesses effectively turned Big Dog’s charisma against him. George Dubya started the slide, although in my opinion it wasn’t the President’s famous problem with clear English, good faith arguments and telling the truth that did him in but rather his pathological loyalty issues. After ritually humiliating staff like Colin Powell who had real rapport with the public and the media, the the administration’s public face by term two included such memorable figures as Michael Brown, Harriet Miers and Alberto Gonzales. Sarah Palin, Sam Wurzelbacher, Rick Santelli and Bobby “Kenneth” Jindal just underline the point that Republicans have lost the knack for talking to ordinary people. Against John Kerry the GOP might have at least played for a draw; Barack Obama is eating them alive.

* Issues. What is left in the Republican toolbag that Bush didn’t already try? We got tax cuts. We tried privatizing government operations, cutting environmental oversight and deregulating finance. We invaded a foreign country just to watch it die. America codified every point in the Republican agenda short of killing the inheritance tax, and as long you count ‘success’ as the overall well-being of America, none of it worked. The party still needs to please the Christian taliban, but out of power policy proposals won’t do them any good there. The GOP’s religious right strategy basically boils down to (1) gaining power on some other issue agenda, and then (2) using said power to quietly please the Christianist crazies. If Republicans honestly proposed whatTony Perkins and the AFA want they would never see step (1). Since worshipping a comic book version of Reagan’s legacy that has some important pages stuck together is the only part of the Republican agenda that they can talk about in polite company, and they already tried that, the elephants are basically stuck.

END_OF_DOCUMENT_TOKEN_TO_BE_REPLACED 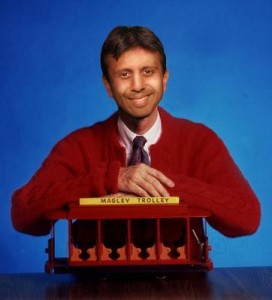 This is kind of funny. While Newt Gingrich is promoting investment in transportation, the official GOP position is that kind of spending is pork, and Bobby Jindal came out swinging against it the other night. Oops:

The high-speed rail line, a topic of discussion for years, would require $110 million to upgrade existing freight lines and terminals to handle a passenger train operation, said Mark Lambert, spokesman for the Louisiana Department of Transportation and Development.

Jindal on Tuesday delivered the official Republican Party response to President Barack Obama’s address to Congress. He criticized the stimulus package passed by the Democratic-majority in Congress and the president and noted examples of projects that he found objectionable.

“While some of the projects in the bill make sense, their legislation is larded with wasteful spending,” Jindal said. “It includes … $8 billion for high-speed rail projects, such as a ‘magnetic levitation’ line from Las Vegas to Disneyland.”

I honestly have no clue why the Republicans don’t take just, at the very least, a month, cool their heels, and figure out where they want to go and what they plan to do. This is just ridiculous.