You are here: Home / Politics / An Unexamined Scandal / Pissed Christ

Many years ago, back when compact discs were a newfangled invention and Al Gore was still creating the Internet the Nation was swept with one of those ‘art controversies’ that flare up from time to time.

In 1989, an artist, Andres Serrano, exhibited a photograph he took a couple of years earlier that sent Jesse Helmes and his ilk into spasms of rage. The work was called Piss Christ: 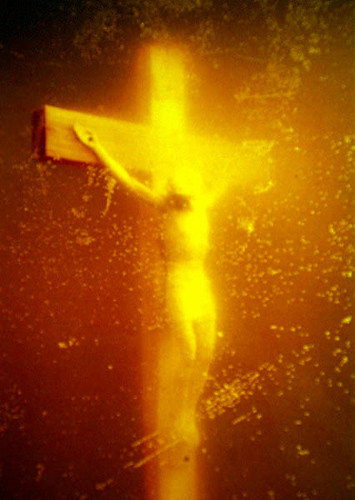 Somehow, whenever I think of this image, I also think of Ralph Reed, an old episode of Night Gallery and Dante’s Inferno.

Along with some photographs by Robert Mapplethorpe, Piss Christ, was one of the works of art that sent the Wingnuts of that long-ago era deep over the edge and deep into yet another battle in their permanent war against art.

The photo is an image of a plastic and word crucifix floating in a container of fluid that the artist said was his urine, hence the name of the piece. The work is beautiful in a way, but also a bit silly when one really considers it.

It was Catholic Nun and art critic Sister Wendy Beckett who–in an interview with Bill Moyers–may have had the best comment on Piss Christ, the artist and the controversy (emphasis added):

Moyers presses on, asking whether she was offended by Andres Serrano’s Piss Christ, a work which, he claims, “denigrates the central figure of your faith.” Again, she begs to differ. While advancing her opinion that Serrano is “not a very gifted young man, but he’s trying to do his best,” Sister Wendy absolutely refuses to see Piss Christ as blasphemous. Instead she reads it as an admonitory work that attempts to say “this is what we are doing to Christ.”

Sister Wendy hits on the connection of Piss Christ to Ralph Reed. Now some might remember that Reed and his Christian Coalition used the controversy as a way to fund-raise and promote their organizations. They continued to beat their drums about Serrano and Mapplethorpe for over a decade and if pressed today you can be sure that they would bring it up again if it might help a few more rubes to transfer money from their pockets to Ralph and his cavalcade of grifters. While their endless con in the pursuit of power and wealth is of interest–it is Ralph’s deep anti-Christianity that really ties the little prick to Piss Christ.

For Ralph’s entire career he has been pissing on Christ, the teachings of Jesus, the notion of Christianity and anything of value that people of faith might hold dear. I’ve come to think of Serrano’s Piss Christ not as an image Chirst, but rather a portrait of Ralph Reed and his twisted soul. It is Reed’s “Picture of Dorian Gray” as it were.

Reed should be in prison for his many crimes, but unlike his old pal Jack Abramoff, Ralph got a sulfur infused ‘get out of jail free’ card. And so, this professional grifter continues to run his con, pissing on Christ every chance he gets. In the run-up to the Election he was teaming up with old grifter pals like Dick Armey and Grover Norquist and new ones like the Quitta from Wasilla to run the scams he has been running for decades–to line their pockets and protect the powerful. And, as always, he claims Jesus even as he endlessly pisses on him.

Ralph was in the news again today–a grifter can never rest. Ralph offered his post-election analysis:

Democrats would have had fewer losses on election Tuesday if President Obama had embraced a “Christ-like model of leadership,” says Ralph Reed, founder and chairman of the Faith and Freedom Coalition. Reed, who used to run Pat Robertson’s Christian Coalition, says a good leader is one who provides not just the “bread, but also the bread of life” for his constituents.

“Even if you bring the capital-gains tax down to zero,” create more jobs, and turn the economy around, he argues, Obama still needs to give an “eternal” set of values, such as opposing abortion and same-sex marriage.

So who would be a Christ-like GOP challenger to Obama in 2012? Reed says his friend, Sarah Palin.

Jesus is just drowning in Ralph’s endless stream of piss.

The pilot for the old Rod Serling TV show Night Gallery had an episode called “The Escape Route”. It was about a Nazi war criminal hiding out in South America. Every day he would visit an art gallery and wish that he could enter a peaceful painting of a fisherman on a lake. By the end of the show he did get into a work of art, but just not the one he wanted. Instead, he got into the one that he deserved.

I hope Ralph’s journey will be a bit like that and that Serrano’s Piss Christ is a visual representation of Ralph’s future home in one of the seven circles of Hell. I imagine that a pissed off Christ might find it fittng for Reed to spend eternity nailed to a plastic cross and floating in all the piss that Ralph has caused to be aimed at the teachings of Christ over his short and deeply blasphemous career.