You are here: Home / Romney is still complaining about attack ads and it’s really funny because he’s a really crappy candidate.

The Romney campaign is cracking me up. 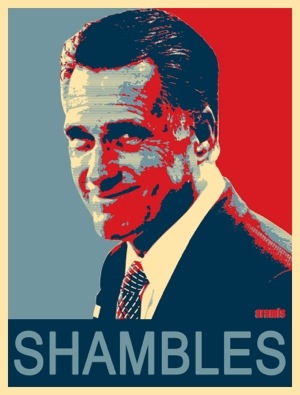 Seemingly alarmed that the Obama campaign is actually fighting to win this election, and apparently unable to scare up a half-decent defense, the Romney campaign is relegated to whining about how mean Obama is:

Mitt Romney said Thursday that President Obama and his allies should be embarrassed over a controversial ad from a super-PAC supporting the president that links the death of a cancer patient to the GOP contender’s tenure at Bain Capital.

“You know, in the past, when people pointed out that something was inaccurate, why, campaigns pulled the ad,” Romney said on Bill Bennett’s radio show. “They were embarrassed. Today, they just blast ahead. You know, the various fact-checkers look at some of these charges in the Obama ads and they say that they’re wrong, and inaccurate, and yet he just keeps on running them.”

It’s cute how he talks about “fact-checking,” isn’t it?

Think of it this way: When the Romney campaign released the “you didn’t build that” ad —

It was a great one-two punch. Obama talking in soothing tones about how awesome you are for building your own business, and a flashy ad about how Mitt Romney blatantly edited Obama’s words and is a dirty liar who will say anything to get elected.

Meanwhile, Romney’s “you didn’t build that” ad ended up being a bust because as it so happened, the star of the ad, Jack Gilchrist, really didn’t  build that all on his own — he benefited from a half million dollar government loan.

Now let’s look at the the Priorities USA ad which has Romney’s knickers in a twist and which has Michelle Malkin keening that Obama is calling Romney a murderer:

What are Romney’s options here? Forget about whether or not the ad is a low blow. The kick in Romney’s pants is that he cannot effectively defend against it. What’s he gonna do? Release an ad that explains Soptic’s wife wasn’t diagnosed with Stage 4 cancer until years after Soptic was fired? Claim that Bain Capital offered to buy Soptic out? Of course not. The last thing Romney wants to do is single out a widower and tell him, “Your wife would’ve died anyway. Sorry, bro.”

Romney does the only thing he can do. Toss out a tired political cliche about how Obama will do anything to stay in power — even though running the Priorities USA ad does not constitute Obama doing anything at all, since his campaign didn’t released it, a SuperPAC did: