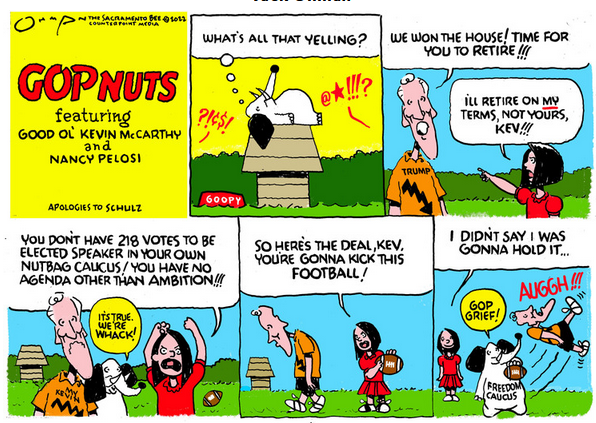 House GOP leader Kevin McCarthy is in the fight of his political life as he seeks enough backing to become the next House speaker. He’s grinding through promises and proposals, cajoling and deal-making necessary to win over reluctant colleagues. https://t.co/ww1zJ0Hej9


Admittedly, that’s a high bar… but right now, the GOP nutballs are fighting to dig that bar into the ground:

… Every new commitment from McCarthy can be seen as a potentially strategic move, intended to quell skeptics on his right flank as he reaches for the speaker’s gavel. With a slim House majority in the midterm elections, the GOP leader must solidify his ranks in a sprint for the 218 votes he’ll need when the new Congress convenes — each coming at a cost and with no room for error.

“We’ll get there,” McCarthy said in accepting his party’s nomination to run for speaker.

The overtures McCarthy is making, some symbolic, others substantive, provide a snapshot of the speaker hopeful’s emerging leadership style. While McCarthy is expected to prevail in his quest for the speaker’s gavel, it is destined to come at a political price, setting the tone and tenor of new Congress.

To start, McCarthy has promised to restore committee assignments for far-right Rep. Marjorie Taylor Greene, R-Ga., after she and another right-flank lawmaker were booted by Democrats over incendiary remarks.

And he has vowed to oust Rep. Adam Schiff, D-Calif., and other high-profile Democrats from their committees in a form of political payback, setting up a divisive House action early in the new Congress.

McCarthy has assured that under his leadership, the House will remove the metal detectors that were installed to prevent firearms in the House chamber; end COVID-era protocols that allowed lawmakers to vote by proxy; and fully reopen the Capitol’s limited visitor access since the Jan. 6, 2021, insurrection by supporters of the former president, Donald Trump.

And in a dramatic nod to the far-right, McCarthy has threatened an impeachment investigation against Homeland Security secretary Alejandro Mayorkas unless he resigns over the department’s handling of the U.S.’s southern border with Mexico…

After pushing his party to victory in the midterm elections, McCarthy won the nod from a majority of his colleagues nominating him to run for speaker. But the 188-31 vote among Republicans showed the shortfall he must overcome. When the new Congress convenes in January, the whole House, Republicans and Democrats, will vote on speaker and McCarthy’s party will need to stick together with their slim majority for him to prevail. Otherwise, a different Republican could emerge as a compromise candidate…

Schiff on CNN on Kevin McCarthy threatening to kick him off the intel committee: "McCarthy's problem is not with what I said about Russia. McCarthy's problem is he can't get to 218 without Marjorie Taylor Greene, Paul Gosar, and Matt Gaetz, and so he will do whatever they ask." pic.twitter.com/AR5nntoNYK

END_OF_DOCUMENT_TOKEN_TO_BE_REPLACED

Glad to see my tax dollars going to something worthwhile for a change. https://t.co/zMeE3IfSj0

— Checkless Starfish Who Can Change His Name (@IRHotTakes) November 23, 2022

I know there are bulb skeptics out there. Please understand that the *underlying technology* is revolutionary. You gotta see what these bulbs do in the springtime.

END_OF_DOCUMENT_TOKEN_TO_BE_REPLACED

if you think $44B is expensive, wait until you see what it takes to develop a mobile ecosystem pic.twitter.com/w3QeG81UTA

END_OF_DOCUMENT_TOKEN_TO_BE_REPLACED

“I ran off all my revenue streams for a guy who won’t post” is admittedly a howling scream https://t.co/Svuvkcq95y

From the guy who coined the perfect ‘Apartheid Princeling Bitchboy’ epithet:

what, ah, what leverage would you say you have in this here arrangement you’ve constructed, elon

so listen, donald it’s like this, I want to make you the star of this here show and it pays in exposure wait where are you going stop laughing I’m serious

buddy… you fucked up again

(Not that a noncompete contract would actually stop TFG, but it does give him an out)

If you would like some insight into why advertisers are pausing their Twitter ad campaigns here it is: the UI is not working properly and they don't even know who to complain to about it because their support teams have vanished. https://t.co/bQ6w4wZCXl

who knows if this will actually translate to any business decision, but apple yanking them would be another extinction level event to contend with https://t.co/uOwk79MogK

ironing out a few bugs such as “the core concept is totally unfeasible with what it’s supposed do if you think about it, at all” https://t.co/TJV7KcuKNQ

A historic tech renaissance to do what, exactly? People love talking about Musk like he's an exceptional visionary, but his first month owning Twitter reads as someone who has no idea what he wants to do or where he wants to go https://t.co/nWgJvmZZon

END_OF_DOCUMENT_TOKEN_TO_BE_REPLACED

"Most of us have experienced firsthand Trump making complete assholes out of all of us," said @Olivianuzzi, who isn't rushing to Mar-a-Lago. "I will fully engage with this when I know what I am engaging with."

It’s scheduled for 9pm. If it happens — we can’t dismiss the possibility TFG will throw a tantrum & refuse to speak if the crowd isn’t big enough — it’ll undoubtably be some new level of grift, but what exactly are the specifics?

And how much flabby white arse will his ‘loyal’ Repub party members show, whether supporting or renouncing him?

END_OF_DOCUMENT_TOKEN_TO_BE_REPLACED

Claiming you're fighting leftists who hate America & refuse to say anything good about it kinda falls apart when you're up against Mark Kelly, veteran combat pilot, famous astronaut, & all-around nice guy, whose wife nearly died serving the people of Arizona.

END_OF_DOCUMENT_TOKEN_TO_BE_REPLACED 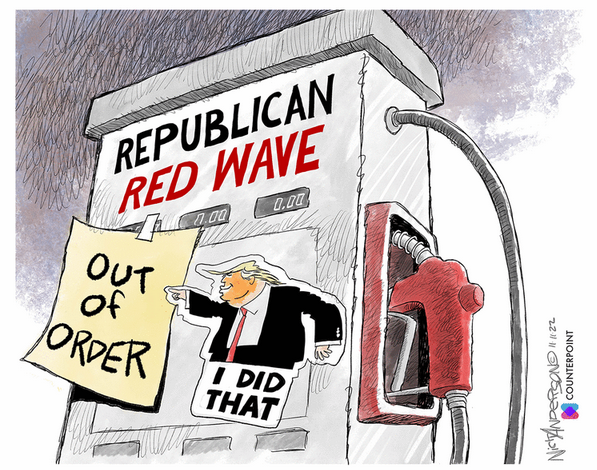 A lot of people are taking tonight as an opportunity to go around and give Republicans and pundits a hard time about what happened with the Senate. I just want to say I think that’s very good and you should continue doing it.