You are here: Home / Past Elections / Election 2012 / Sermons in Stones

Plenty of folks have responded to what seems to me to have been an extraordinary Second Inaugural address by President Obama.  See two Jim Fallows posts for starters.  It was, as Fallows says, a striking speech on at least two levels:  that of content, with the president’s clear and unequivocal declaration of liberal intent; and that of rhetoric with its phrases infused with historical intent, American civic scripture, and compact, elegant, present-day exegesis.

But the symbolism within the speech did one aspect of the speech that hasn’t got much (any?) notice — perhaps because Chuck Schumer told the story, not Obama.

That is:  the setting of the president’s speech, the porch of the US Capitol, provided a visual and material rhetorical grace note to the claims on history and present urgency that President Obama expressed in words.

Here’s the background: design work had begun on a new dome  for the building in 1854, following an expansion of its two wings of the Capitol, completed in 1855.  That work was nowhere near complete on 4 March, 1861, the day of Lincoln’s first inauguration: 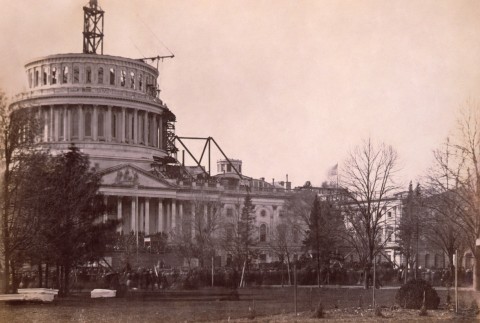 Work on the dome — or rather payment for the work — ceased for most of 1861.  The lead contractor on the project had $1.3 million worth of building materials on site — I’m not 100% sure, but I believe that you can see some  of the construction materials for the dome in the foreground of the image above — and decided it was better to keep going and hope that the federal government would pay up in time, which they did.  As the Historian of the Capitol, William Allen, notes the story that the new president himself  [PDF] ordered the continuation of the work is a myth — but the symbolic significance of the project didn’t escape Lincoln either.

The exact form of the Lincoln quote in reply to a question as to why spend money on architecture in the midst of war seems a bit apocryphal to me, but there seems to be a pretty broad recollection that he said something like  “if people see the Capitol going on, it is a sign we intend the Union shall go on.”  Certainly, when I interviewed him for this film, Allen emphasized how potent the ongoing construction was for the troops from all over the Union who mustered on the Mall before marching off to the forward positions of the Army of the Potomac.

The dome wasn’t quite complete in March, 1864, but it looked mostly as it does now — that towering white, grandly neo-classical confection, its domed shape a recognized symbol of the cosmos as a whole — of the order of heaven — in a bit of architectural iconography established at least as far back as the Emperor Hadrian, who so pointedly staked his claim of divine sanction in one of the foundational statements of western architecture.

And of course, to play a little of the political numerology so beloved of pundits, that means that the first Second Inaugural to play out against the backdrop of the dome was Abraham Lincoln’s.  The most recent, complete with language deliberately echoing Lincoln’s, came yesterday.

Schumer’s anecdote played on that connection — that Lincoln asserted the claims of union against the forces of disunion and authoritarian oppression, while Obama yesterday advanced the notion that we are a society, not an atomized cloud of individual secessionists.

We’ve lived a to-me unprecedented four years in which the opposing party has challenged not just the policies or politics of the administration, but its legitimacy, the right to exercise power conferred by democratic choice.  The echoes of race, of secessionism, of the authoritarian claim that the consent of the governed is tolerated only so long as hoi polloi make the right choices are all distant (and not always so muted) echoes of 1860 and 1861.  And yet the black man with the funny name just took the president’s oath for a second time, directly beneath what we might, not quite accurately, nonetheless call Mr. Lincoln’s dome.

This is how rhetoric engages historical change. The meaning of the dome is not the same as it was in March, 1865.  Still, it connects.  And even if President Obama’s opponents cannot bring themselves to accept the blunt reality of a Democrat, an African American, and  a mainstream-progressive (if that characterization makes sense, and I think it does) not just winning, but holding power, the dome is there to remind them of a lesson very similar to what the traitors of 1865 learned to such cost: that the union is not merely the property of entrenched power.

That’s the chief significance of the visual language of Obama’s greying head beneath that wedding cake of dome.  It’s sufficient.

But there is actually one more thing.  Somewhere — it may have been a Balloon Juice comment thread, actually — I read someone quip that with all of Obama’s talk of internal improvements, infrastructure and investments in the future, the man sounded like a Whig…just like that railroad lawyer, the young Abe Lincoln.  In that context, the Capitol dome is a perfect symbol of the innovation and swelling ambition of the nation, then and now.

For the dome is a glorious lie.  It may look like shining marble, a masonry structure just like the grand baroque domes of Europe, St. Peter’s and the like.  It’s not.  The entire thing, inside and out is a jigsaw puzzle of cast iron, painted to fool the eye.  I’ve had the exceptional good fortune to climb inside the dome, between the inner shape you see from the rotunda and the familiar gleaming confection that stands over the mall.  When you do you climb up the stairs there you duck through the ribs that hold up the outer skin and from which rods connect to the (self-supporting) inner one, each made of plates bolted together. 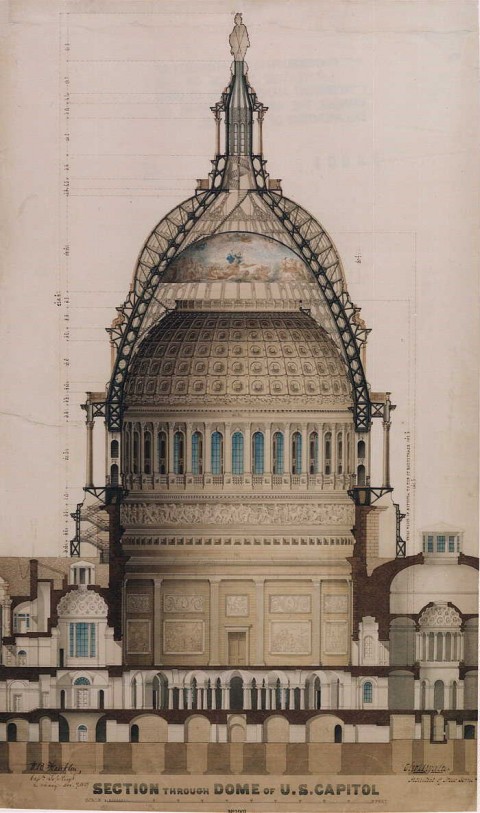 (Don’t be fooled — all those coffers on the inner dome that appear to be pale carved stone in the drawing above are cast iron too, painted a dull grey on the side the punters don’t see.)

The iron segments that accrete into the dome were cast — in NY, I believe, though I’m on the road, away from my notes, and my memory may be playing tricks.  The material was shipped to Capitol Hill and assembled there, like a giant erector set.

The meaning — or at least a meaning?

You see in the fabric of the building at least two connected thoughts:  an object lesson in the sources of the defeat of the Confederacy:  already, by the 1860s, the American metal working industries — largely concentrated in the loyal North —  were advancing to and past the capabilities of the world leader, Britain.  And in our Civil War, Yankee industrial power and skill beat an economy based on the theft of human labor.  Paying attention to science, to technology, to the skills needed to play in the big leagues actually made a difference in that war, logistically, the difference.

Such attention is still all-in-all. . Hence the significance of that portion of President Obama’s campaign and inaugural address that spoke and speak to the need to invest in the brains and the technologies that matter right now.  And all the while he spoke, the dome stood behind him, granting historical assent.

Material objects have always been able to serve as both things and symbols. That China has just opened the longest high-speed rail line in the world is of obvious practical consequence for that nation.  No one doubts it has rhetorical significance as well.  The Mars rover Curiousity is so much more than a go-cart.  And so on.

Symbols as they age change:  they gain resonance; that accumulate layers of meaning, perhaps even some that complicate each other.  The Capitol Dome was completed as an element in the argument over what kind of country the United States could hope to be.

The second inauguration of President Barack Hussein Obama, performed under that great structure, advances the cause of union and of this Union at this precise moment in time.  It is altogether fitting and proper that it should do this.

*Actually, the first dome was a visual disaster all on its own, one of Charles Bulfinch’s least impressive efforts — though it must be admitted that he didn’t have an entirely free hand in his design.

Cross-posted at the Inverse Square Blog.