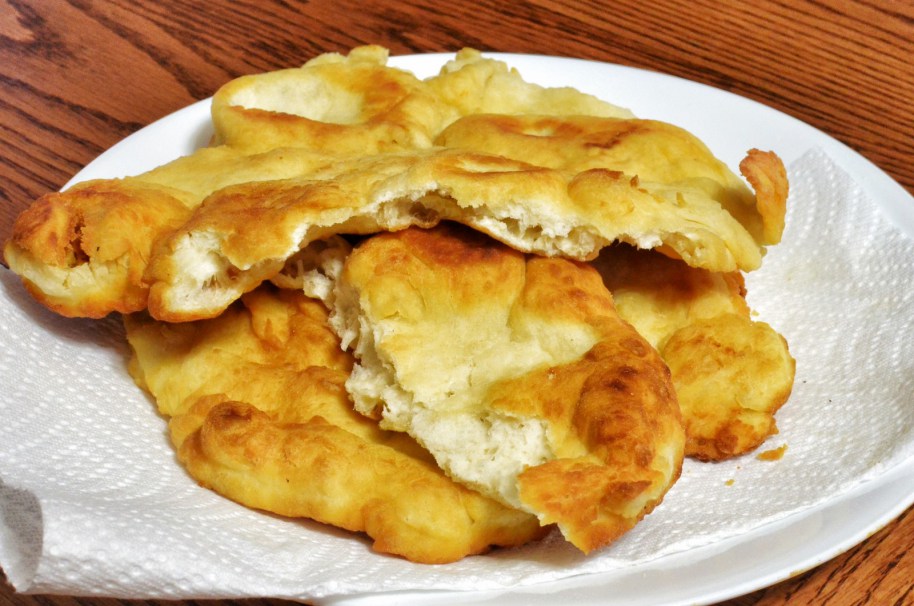 I was working on the Dinner Menu for the week and lamenting the fact that I have a difficult time finding good pita breads in my area. I decided the next time I make the Chicken Pilaf and Cool Dill Dip menu (recipes and photos here) I would try using Fry Bread as a substitute. Then I thought that would make a good topic for tonight’s recipe exchange. (I cannot lie, what really tips the scales for the recipe exchange is which pretty, yummy photo of JeffreyW’s can I highlight)

First up, JeffreyW makes Fry Bread (pictured at top) for Fry Bread Tacos, click here for recipe and great photos. He took the same recipe and sweetened it up with honey, cinnamon and sugar, as pictured below: 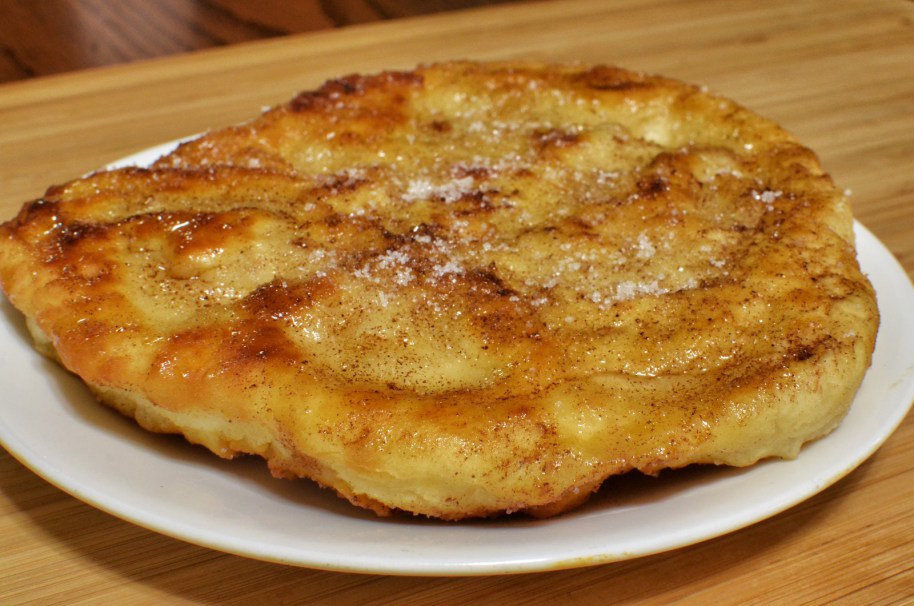 Not satisfied with a flat product, he decided to experiment with making it into a bowl and serving it with an awesome soup in his Bean Soup in a Fry Bread Bowl, recipe and photos here.

What’s in your bowl this weekend? Do you have any special or unique family or cultural recipes to share? Hit the comments with your ideas and recipes. I love to add new flavors to my repertoire.

For tonight’s featured recipe, I turn to friend of blog, Aji for a fry bread recipe she sent me months ago, at my request:

Mix dry ingredients thoroughly. Slowly add warm water until the mix reaches a consistency similar to pie crust. Mix thoroughly, using your hands, if necessary, but do not overwork it. Leave dough in bowl; cover and allow it to “rise” for 30 minutes.

After dough has risen, add the lard to a cast-iron skillet and heat it to just sizzling. While the lard is heating, turn the dough out, separating it into 6-8 balls. Each should be larger than a golf ball, but smaller than a tennis ball. Take the first ball and flatten it slightly on floured surface.

Once your dough is flattened and in the desired shape, gently poke a small hole in the center with your thumb. This will help with allowing the frybread to “puff” properly. Holding the dough by one edge, gently slide it into the heated oil. Once it’s covered by the oil, use a spatula or other utensil to spoon the oil repeatedly over the top of the frybread; this will also help it to “puff.” Once puffed and beginning to turn golden at the edges, gently use your spatula and another utensil to turn it over; then continue spooning the oil over that side. After a minute or two, turn back over; if golden brown, use utensils to lift it out of the skillet and drain the oil, then place, puffed side up, on a paper towel to drain.

Repeat with next ball of dough, until all pieces are fried. Makes 6-8 pieces of frybread.

Serve hot, with butter and honey.

Ingredients: First, of course you can use regular wheat flour, but we try to stay away from refined flour and sugar as much as possible for health reasons. Stone-ground wheat flour, however, doesn’t produce the proper texture. Since we eat it relatively rarely, unbleached wheat flour makes for a good compromise, but doesn’t affect the texture or taste.

Second, you’ll notice a range for how much baking powder and salt to use. Most recipes call for the upper end of each. With ground sea salt, I use about a teaspoon. With baking powder, it depends on the brand: more with Calumet or Clabber Girl; less with Bob’s Red Mill, which has a saltier, more acidic flavor.

Third, around here, a lot of people commonly “cheat” by using yeast. Yes, it’ll rise a bit more, but not appreciably so; the baking powder will suffice, provided that you let it rest for half an hour. More to the point, if you’re a purist like me, it’s not really “traditional.” For our parents’ and grandparents’ generations, yeast was expensive and hard to get – especially so for Indians. To me, adding yeast is cheating, and honestly, much as I dearly love yeast bread, it doesn’t taste right in frybread.

Finally, you’ll note that I use lard, NOT shortening or vegetable oil. Some people do use the latter two now, but ask any Indian: What it produces is NOT Indian frybread, but merely fried dough. It’s the animal fats in the lard that gives frybread its traditional flavor. That said, if you’re vegetarian/vegan, or do not eat pork, you can make a facsimile of it with shortening or vegetable oil.

Forming the dough: Traditionally, fryread pieces are formed by taken the flattened disc of dough and slapping it together rapidly between one’s hands – back and forth, flattening it with each pass. If you’re like me now, my hands can no longer take it. It’s perfectly acceptable to flatten and shape it on the countertop with your hands, or to roll it out with a rolling pin. Traditionally, they are round-ish in shape, but they can be formed into other shapes, if you prefer (Wings’s mother used to make them square, so I sometimes do that for him, too). Additionally, don’t worry of they are not perfectly round – frybread, when done, is puffy and bumpy and full of texture, so it doesn’t need to be a perfect circle. Done properly, it all tastes the same.

Cast-iron v. other materials: Traditionally, you would use a cast-iron cauldron or pot, but I don’t have one, and it wouldn’t fit on this tiny stove-top anyway. But cast-iron is key; it works far, far better than any other material I’ve ever used. You can, of course, use more modern cookware, but the texture never comes out right, in my experience.

You can also use the frybread as a base for an entrée instead of a snack or dessert. The Indian Taco is actually no taco at all, but a combination of meat, vegetables, chile, and cheese atop a piece of frybread. Variations of the Indian Taco are another diary altogether.

Finally, leftovers: You can reheat frybread in the microwave on high for 10-20 seconds to make it soft and warm again.

That’s it this week, with a big thank you to Aji for the great recipe and tips. –TaMara