You are here: Home / Still Creating Their Own Reality

Peter Wehner, torture enthusiast and general right-wing neo-con shit-stain, takes to the liberal NY Times to thumb his nose at the libtards:

Have Democrats Pulled Too Far Left?

AMONG liberals, it’s almost universally assumed that of the two major parties, it’s the Republicans who have become more extreme over the years. That’s a self-flattering but false narrative.

To see just how far the Democratic Party has moved to the left, compare Barack Obama with Bill Clinton. In 1992, Mr. Clinton ran as a centrist New Democrat. In several respects he governed as one as well. He endorsed a sentencing policy of “three strikes and you’re out,” and he proposed adding 100,000 police officers to the streets.

Beyond national elections, there is another way to measure these questions, and just today Gallup shows us how:

Americans are more likely now than in the early 2000s to find a variety of behaviors morally acceptable, including gay and lesbian relations, having a baby outside of marriage and sex between an unmarried man and woman. Moral acceptability of many of these issues is now at a record-high level. 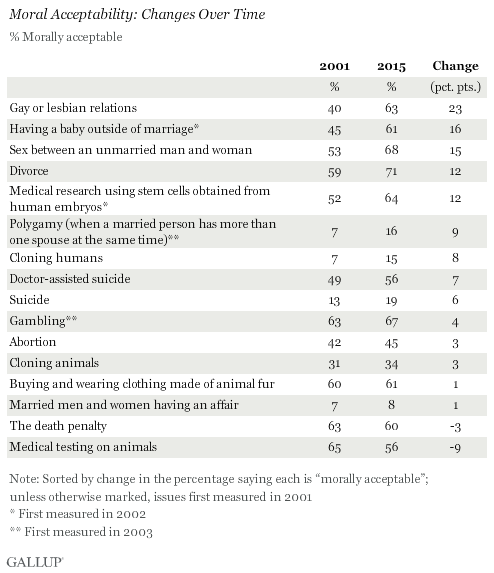 This latest update on Americans’ views of the moral acceptability of various issues and behaviors is from Gallup’s May 6-10 Values and Beliefs survey. The complete results for each of the 19 issues tested in this year’s survey appear at the end of the article. Gallup has tracked these moral issues in this format since the early 2000s.

The upward progression in the percentage of Americans seeing these issues as morally acceptable has varied from year to year, but the overall trend clearly points toward a higher level of acceptance of a number of behaviors. In fact, the moral acceptability ratings for 10 of the issues measured since the early 2000s are at record highs.

Americans have become less likely to say that two issues are morally acceptable: the death penalty and medical testing on animals. But Americans’ decreased acceptance of these practices actually moves them in a more liberal direction.

These results reflect the same type of shift evident in the public’s self-reported ideology on “social issues.” More Americans now rate themselves as socially liberal than at any point in Gallup’s 16-year trend, and for the first time, as many say they are liberal on social issues as say they are conservative.

You can shove that narrative up your chickenhawk chairborne ass, you scumbag. Although as we know, statistics have a well-known liberal bias.