Guy who wrote Art of the Deal for Trump:

Trump now says he was joking re: Russia. Here's what I know: he doesn't joke. He is humorless. What he does is lie when he gets in trouble.

If you blurt something out in a moment, you can claim it was sarcasm or a poor joke.
If you take the time to tweet it after?
Not a joke.

As many critics have pointed out, Ian Fleming wrote the first James Bond novels just as the sun was conclusively setting over the British Empire. While grey little MI bureaucrats coped with rationing coupons and currency restrictions, every day seemed to bring news of another embassy ceded or outpost overrun by lawless wogs and ungrateful colonials. But the imaginary Bond was an invicible Trickster, breezing past every finger-wagging Moneypenny and shadowy figurehead M to play one exciting scenario after another in a world of limitless funds, fast cars, exciting tech toys, bangable women, high-end cuisine, and a whole carefully-curated shopping list of the top consumer brands in every category. Even President Kennedy — who knew to a nicety just how much it cost to live like Bond — enjoyed the paperback fantasies where constant physical discomfort and the subliminal Cold War drumbeat of Mutually Assured Destruction could be ignored, however briefly.

Half a century later, as the American Exceptionalism empire ebbs, and even the bedrock verities of white racial superiority and ‘natural’ patriarchy are under assault, an aging New York developer stands in front of a full-length gilt mirror in his knockoff penthouse, adjusts his made-in-China self-branded tie, and whispers to himself “Trump. Donald Trump.”…

.@KatyTurNBC basically gave Trump 2 chances to say he was joking about Russia hacking Hillary. He stood by it. https://t.co/pMMbjw5kuf

To believe Trump was serious about Russians hacking Hillary, you'd have to believe he is clinically insane https://t.co/9Sn0j7wn0q

He said it, not me https://t.co/GksEYGuwA9

.@HowardKurtz @MalcolmNance @FoxNews Is that so very hard to believe?

Hillary Clinton should not be given national security briefings in that she is a lose cannon with extraordinarily bad judgement & insticts. 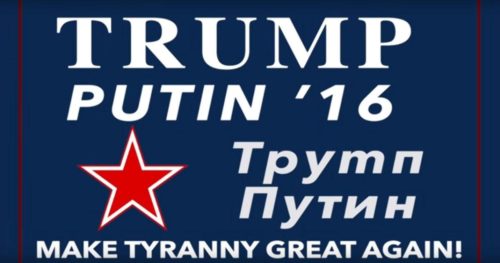 (via LBGTQ Nation)
Previous Post: « All The Good Shit Belongs to US
Next Post: Friday Night Open Thread »