Every night when I go to sleep I listen to a documentary to put me down. There is something soothing about the sound of a narrator talking that just knocks me out. I also like AM radio voices, but they are all conspiracy nuts or shouty at that hour, so documentaries are my go to. Recently, I have been working my way through Ken Burns Civil War again, and Peter Coyote lulls me to sleep. At any rate, while listening to this, it just struck me how, in the big scheme of things, the Civil War was really quite recent.

As we all know, when you’re younger, everything is bigger and old people are older and your perspective form your experiences is much narrower. When you’re ten, the Civil War and the Revolutionary War and the might as well be the middle ages because it’s a long, long time ago- so long ago that your few years don’t provide you with the ability to truly comprehend time. I remember when I was a kid summer vacation felt like 50 years and turning 18 seemed unfathomable. The civil war when I was ten was had been over for 115 years, and that just seemed like ancient history. Now, as I approach 50, I have more persepctive, and 150 years ago is just three times my age, and doesn’t seem that too far back.

I guess it’s kind of like the opposite of that first time you climb up on a diving board. From the ground, it doesn’t seem that high because it’s only four feet from your head and you can almost touch it, but when you get up on there, you’ve added your height to the height of the diving board you’re standing on, and damned that ten foot diving board is now almost 16 feet from the water and seems a helluva lot farther away. It’s kind of like that in reverse.

At any rate, the Civil War wasn’t that long ago. Neither was the Civil Rights movement. In terms of historical memory, these events are babies- so is the founding of this country, for that matter. Hell, Hawaii and Alaska were barely states when we voted in Kennedy. This is recent shit.

This afternoon I was sitting in the chair reading and had the tv on in the background, and I switched for some reason to MSNBC to see if Trump had fucking declared nuclear war or something else awful, and the first topic covered was the protests in St. Louis because once again, a fucking cop had killed a black man and had been acquitted. The next topic was the fucking scumbag President demanding an apology from Jemele Hill for correctly pointing out that he is a fucking white supremacist who has surrounded himself with white supremacists and has worked to enact white supremacist policies and who can not condemn white supremacists even when they murder people in the streets without making up some bullshit both sides argument.

I turned the tv off.

Now look, I know the last fucking thing this planet needs is another hot take on race from a middle-aged male so white that French vanilla ice cream looks tan next to my skin, and I know I am not a first rate intellect or an amazing writer, nor do I have the experiences of being black in America, but you’re getting one anyway because I need to get this shit off my chest. Do white people truly not understand that black people in America are some of the most patient people on the fucking planet? And I truly mean that. Because if white people had gone through 1/100th of what black people have collectively, and the roles were reversed, this is what St. Louis would look like right now after a black cop murdered yet another white person, planted the weapon, and then got acquitted: 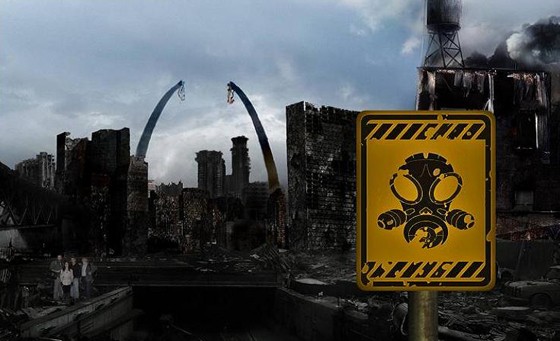 That is not an exaggeration. We white people rioted for the simple reason a black man got fairly elected. We (and this is a royal we) lost our fucking shit when the black President suggested that maybe a white policeman shouldn’t have gone Robocop on a college professor on his front porch for, well, being black. We demanded he have the fucking cop over for a beer. Do you remember that shit? I can’t even think about it without rolling my fucking eyes in disgust at my fellow white people. Jesus fucking christ.

Can you imagine what shit would be like right now if we had suffered through slavery, the systematic dehumanization of our kind, the institutional racism, the lynchings, Jim Crow, the prison-industrial complex- ALL OF THAT SHIT down to the every day little shit of being looked at sideways any time you enter a store to the MOTHER FUCKING PRESIDENT demanding an apology from a black woman for telling the truth? We are so fucking lucky.

Fer fuck’s sake, the patience of the black community is unbelievable. Christ on a crutch, Obama was elected and people got all worked up and how did black people respond- by suggesting we have a national conversation on race. And we white people even fucked that up. What was meant by a national conversation on race was a dialogue, and one in which WHITE PEOPLE SHOULD SHUT THE FUCK UP AND LISTEN ABOUT ALL THE HORRIBLE SHIT WE HAVE DONE, but we couldn’t even do that. Fucking white people took it as an invitation to tell black people all the reason we think they suck.

If roles were reversed, we’d have white terror cells that would make ISIS and Al Qaeda blush. As it is, roles are not reversed and the fucking racists are trying to get there anyway. So yeah. Shut the fuck up and count your lucky stars you are white and thank your god that shit has worked out the way it has. Because we’re lucky as fuck that the sum total of the black response is to form nonviolent groups like Black Lives Matter and the NAACP and what not, maybe a few randoms obliquely discussing reparations, and a few fucking broken windows every now and then when black people are murdered in the fucking street by an unrepentant white power structure.