You are here: Home / John Cole Presents "This Fucking Old House" / Your All in One Domestic Open Thread

Spring is allegedly here, although we are still going to have some chilly weather in the next few weeks, but the daffodils are having none of it:

The tulips will be next. Last fall was my first bulb planting at the new house, and now that I have seen how it looks, I am going to triple my planting this fall.

Dean (the guy who did most of the work on the house) was in town this week, and we spent some time stabilizing the first floor. Remember, when I purchased the house, the idiots before me had cut a joist in the ceiling, which had put all the load bearing on the beams in the basement and created a five inch sag on the main floor, so we had to jack it all up and put 8×8’s in, etc. That, and the addition of the 3/4 inch interlocking hardwood floors firmed things up, but there was still some give. After a year and some of letting the house expand, contract, and settle, it was time to head back to the basement and make a few adjustments. We added some more supports and what now, and I can now report that even my fat ass can do jumping jacks in the living room and none of the china in the corner cupboard so much as jiggles.

The backyard is the next project- the raised bed gardens are going in (I salvaged two from the old house, and am putting in three new ones), and we are hauling all my soil and compost from the old place. Those will all go in the area of my yard that will get the most sun, while on the other half of the yard, where there is shade from pines and I put in the two apple and the chestnut tree, the butterfly and bee pollinator garden will be going in with a bird/butterfly pool. Tht’s also where the compost pile is (in the back corner). Last year I put in a dozen blueberry and blackberry bushes under the pines, so we’ll see if those produce anything. I’m going to throw some mushroom logs back there too and see what happens.

In June, we are cutting the deck in half because it’s too damned big, and I want to reposition where the stairs are and add some support beams as well as some 4×4’s so I have a place to tie off a large retractable tarp for some shade.

As far as actual plants, the babies are doing well: 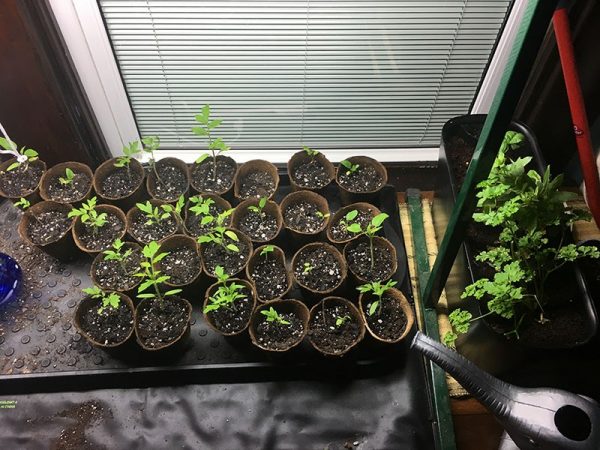 I’ve got a new run of seedlings in, this time, mainly herbs, some late blooming tomatoes, and my cold weather run of broccoli and cauliflower. So that’s how things are going here.

Brian and Tammy are coming up tomorrow, and we are going to cook an Easter feast for my folks and some locals.

OMG- I completely forgot the total overshare portion of this post. I bought a bidet attachment for my toilet and from Tushy and I am embarrassingly excited.