These pictures were taken on July 7, 2018, in the morning and early afternoon, with my Samsung Galaxy J7 phone, while on a short half-day trip with my soon-to-be-a-middle-school-student daughter. The locations are within 40 miles of each other; Carmel is about an hour south of our home base in San Jose. One thing I’ve learned about my camera phone is that it doesn’t do well with extreme light conditions: either too little or too much. Additionally, in bright outdoor conditions, it’s hard to see the screen so I often end up literally shooting from the hip and guessing on the framing. Shorter version, you get what you pay for.

The second mission built in Alta California; founded in 1770 and constructed at its current location in 1771. In common with the other missions, there has been extensive reconstruction, as it was abandoned in the 1830s and lay fallow for almost a century.

(picture taken in 1893, on the wikipedia page).
The beautiful physical structure is in stark contrast with the decades of violence — child theft and indoctrination, rape, murder, forced labor, etc. — committed against the local population on this ground.

On the road from Carmel to Greenfield. The road goes southeast, up the Carmel Valley, climbs up and down across the ridges, then descends the Arroyo Seco valley, and enters the Salinas Valley west of Greenfield. We have just crossed the drainage divide and we’re looking east. 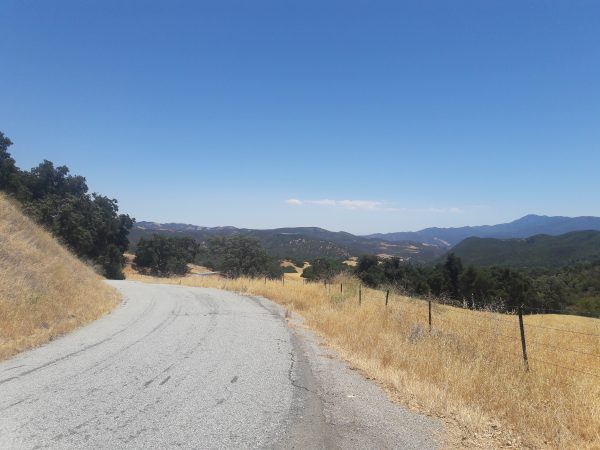 Father — now Saint — Junipero Serra, the architect of the Alta California mission system, died here, and is now buried beneath the altar. I believe the appropriate offering is the same one you would make at Howard Jarvis’ grave. If you know what I mean. And I think you do. Or, to put it another way, if this grave were outside, I would say that it would never go un-watered. 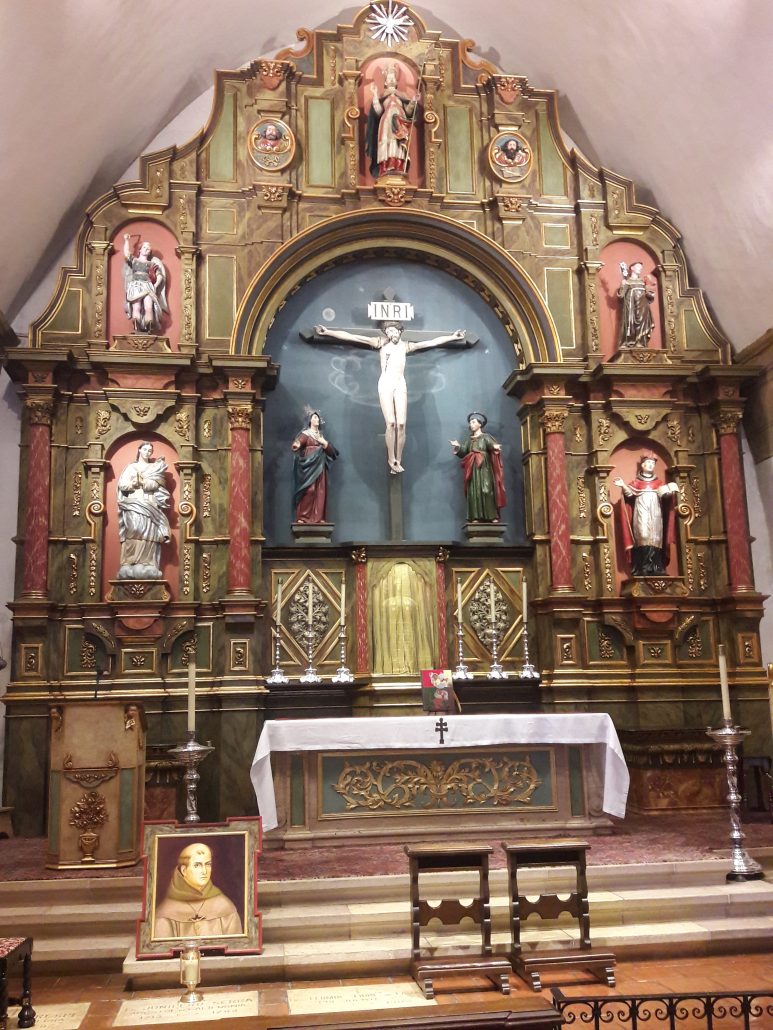 This is a Carmelite Monastery that gives Monastery Beach its name, and is located a couple of miles away from the mission. In the middle of the frame, you can see the top of a car heading south on Highway 1, which is normally the most beautiful route to Los Angeles, but the road had been closed just below Big Sur following a May 2017 landslide. A few weeks after our visit, the road was re-opened. 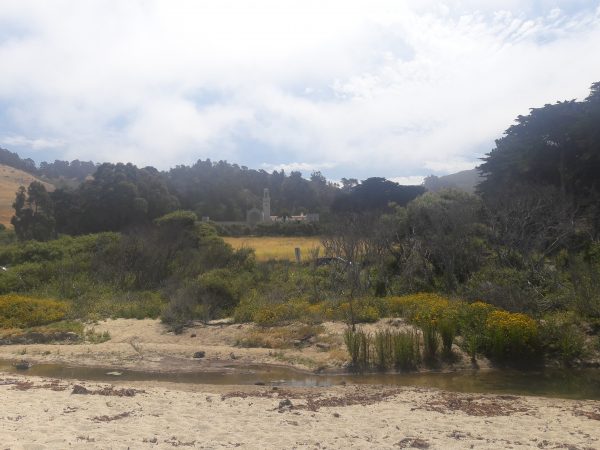 The view in the other direction. I’ve never been to Monastery Beach before; it’s not a good location for body surfing, or even wading much beyond ankle depth. Fortunately, that’s all we needed, as we were just looking to dip our feet in the Pacific before heading inland. I had texted my partner, when we arrived, letting her know which beach we stopped at. She texted back a few minutes later to make sure I knew the nickname of the beach was “Mortuary Beach,” for the shore break’s adverse effects on the human body. 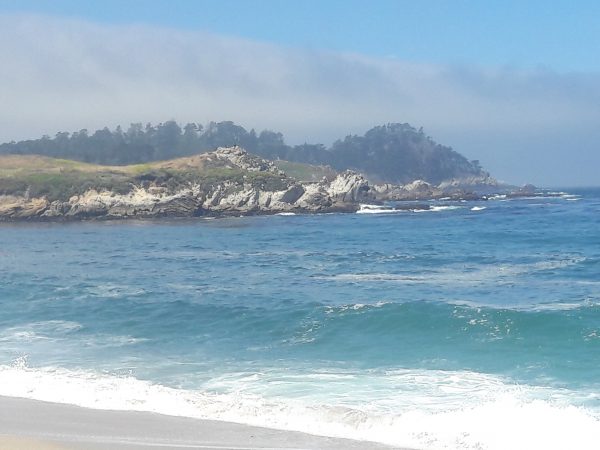 You can see the river at the bottom of the frame. The landowners in the area alternate between raising cattle and growing grapes. The yellow plateaus in the left and right foreground had cows grazing, with an occasional water trough and feed drop-off point, while the green in the back of the picture were all vineyards. We’re about five miles west of Greenfield. The road splits in a few miles, and the bridge to the south bank is at an area that the locals congregate at on hot days for river play. There were about twenty vehicles parked on the side when we went through. 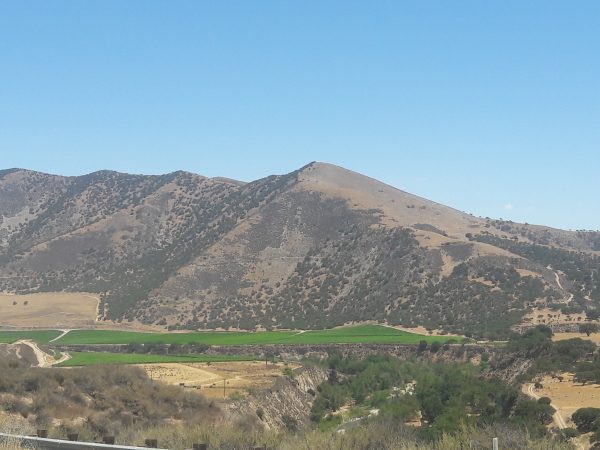 River Road runs up the west side of the Salinas Valley. The 101 is on the other side of the river, and runs through all of the towns. The Salinas Valley is heavily agricultural — one nickname is the salad bowl of the world — and they were harvesting cabbage on the day we drove through; 85 degrees out and everyone had as much skin covered as possible. Every time I see people out working hard on a hot day in the fields, I’m thankful that my family is at least a couple generations removed from that necessity. This cactus farm is just outside of Salinas. One of my favorite breakfast dishes is nopalitos con huevos (cactus with eggs) and I get a nice warm feeling every time I drive past this field. 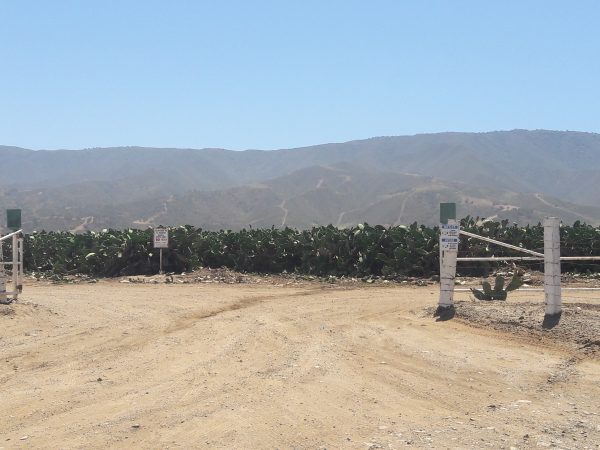 Thank you so much SoupCatcher, do send us more when you can.