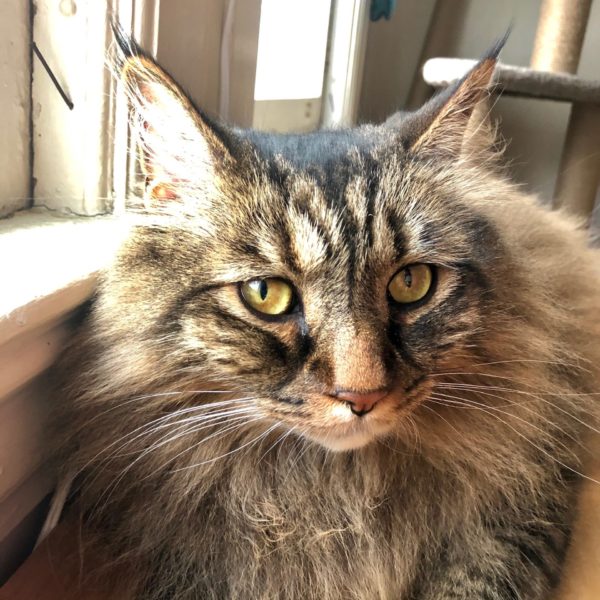 Just in time so we don’t all go a little bit mad with the news, WereBear sent me a guest post. Take it way WB:

If anyone is going to be happy about this current crisis, it will be our pets. Especially our cats, since many of them don’t go out anyway.

They will think spending all this time with them is because we love them. Let them think so.

If there’s anything I’m well-supplied with, it’s cats. I am now living in Kitten Country with the full Boy’s Club; all five of them.

This is because of Cat Progress. Both in my home, and in the wider world of cat rescue. Since early fall, when I rescued feral pair-bonded kittens, the process of Cat Introductions has been going slowly. In fact, it’s still going on.

We recently moved Mithrandir, a professional scaredy cat, into Kitten Country. Two days in we had our first case of Three Heads, One Bowl. He and Bud and Lou all ate from the same bowl of food. Then I knew he’d fit in fine.

Mithrandir deals with some challenges. He was a feral rescue at five weeks. At three months we picked up the taming where the shelter left off. As he grew, I eventually realized he was a Gamma, the shyest of my three Cat Types. So change is not his friend.

When we adopted a bonded pair of kittens we named Bud and Lou, he was very cautious. The last kittens he’d seen was his own litter, and that was five years ago. But he’s a giant cat who took years to mature. Not that far from his own kittenhood.

What saved him is how social his heart turned out to be. Turns out, living with Miss Princess Olwyn was not nearly as much fun as hanging with his friends Reverend Jim and Sir Tristan. Olwyn has high Tortitude and low tolerance for anyone not “doing it right.” As she sees it.

Then she grew cranky with Mithy as she saw a chance to get Mr WayofCats all to herself. Knowing her, she thinks she has wished all the rowdy boys “into the cornfield.”

Mithrandir began misbehaving. Which is always a clue that our cat is distressed, not malicious. Transfer was delayed while we hunted down something which could contain his bulk. This is a combination of his 26 pounds of pure muscle, and his mutant-sheep (this is Jack Arnold level stuff) Persian coat. All of which makes our largest carrier fit him like a sausage casing. 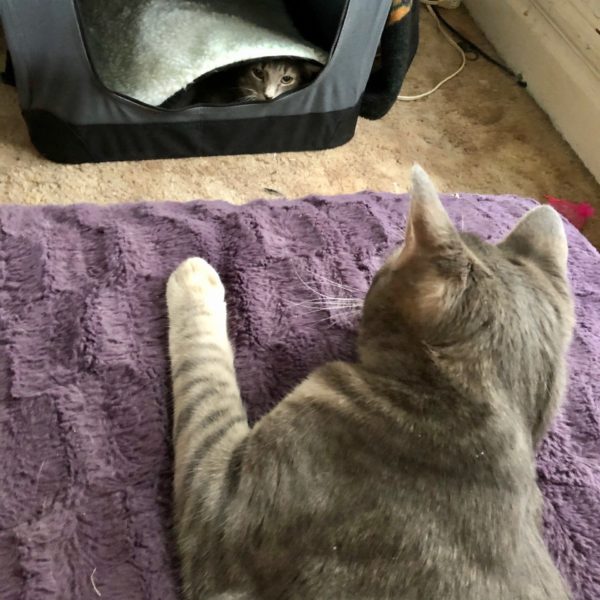 We wound up with a collapsible dog crate that took both of us to lug upstairs to Kitten Country, but then the hard work was over. Mithy saw the working Litter Robot, the full dishes, and the welcome from his buddies. Compared to cranky Olwyn, the respectful kittens were even more appealing.

It also made me realize that our last three kittens came from managed feral rescue efforts. I think it takes someone with cat rescue experience over a few decades to understand just how amazing this is. Spaying and neutering efforts, the rise of no-kill shelters, and a network of dedicated volunteers have brought us so far along.

These efforts are all paying off when we have the capacity to go out and hunt down cats to be rescued. When feral colonies are managed to humanely dwindle on their own. Resulting in the joys of sweet velvet-eared kittens getting domesticated, and bringing their joy to people. 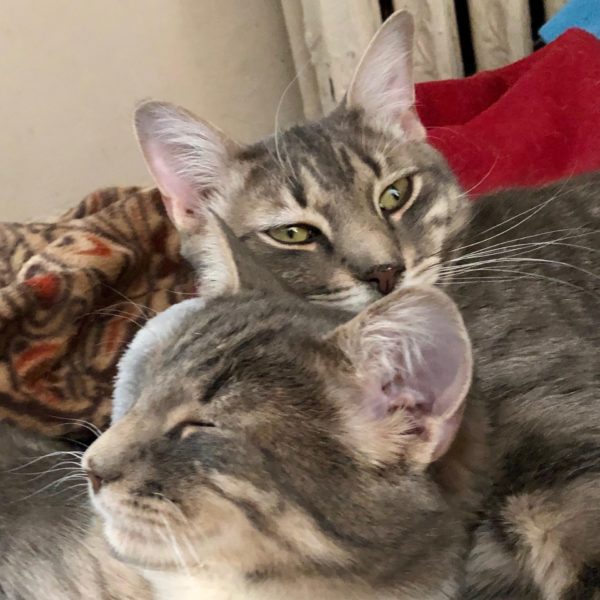 At a time when we could all use some safe hugging, WHO has declared pet cats and dogs safe from suspicion of passing on, or catching, the virus. I’m going with that.

Stay calm, wash your hands, and hug the ones you’re with.

Before bunkering, I stocked up on both food and litter, because you have to consider both ends, of course. All with social distancing, too.

Because I don’t need extra errands with our health issues, I was already getting pet supply shipments from Chewy and PetFlow. They both run deals with discounts on the first autoship

Discover the Way of Cats.  Get my book. Get the latest kitten pics on Twitter.

TaMara again. Whenever WereBear sends a post, it always makes me think about Gabe. He is so different than any cat I’ve ever had. But given the space to just be himself and find his way, with lots of love and no judgment when he needed to test the limits and occasionally soil outside the litterbox, he’s really opened up. When that didn’t end with him back in the shelter, he settled right in – after a year and a half he seems content with life in casa-crazy. Although sometimes I feel as if he’s a visitor judging us from his perch. 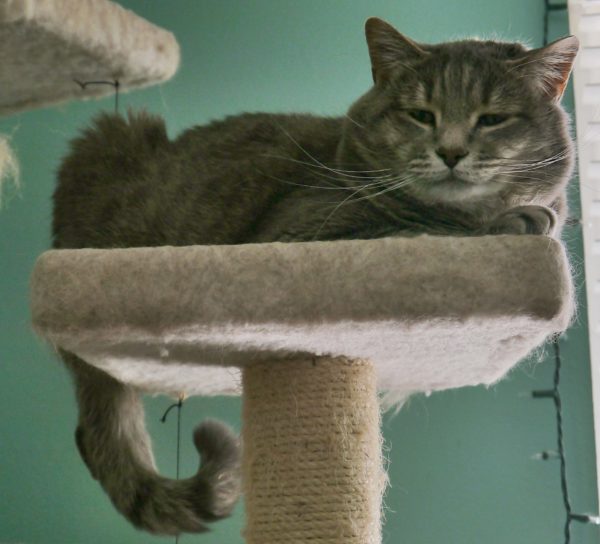 Hopefully, WereBear will be around for any cat questions. Meantime. how are your critters handling the social distancing?