Avalune is standing by for the Wednesday discussion of this week’s military life post.  (Leto, too.) 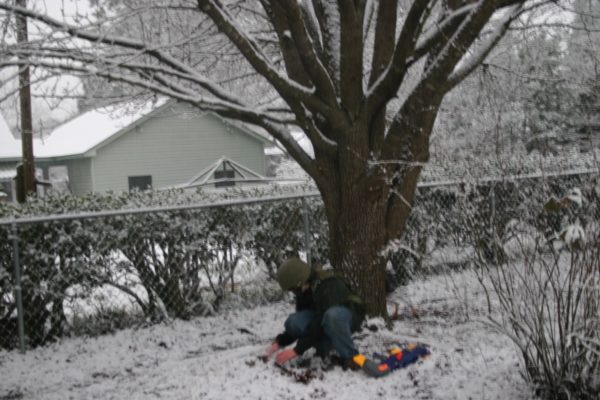 I could tell you my adventures – beginning from this morning, but it’s no use going back to yesterday, because I was a different person then. – Alice in Wonderland

We’re making our way to the back of a nondescript beige/brownish rectangular building that could be picked up wholesale and dropped into any military base in any state without anyone batting an eye. The interior is just as vague as the exterior, with endless airplanes, pictures of smiling airmen in uniform forming a pyramid of chain of command, and flyers for base services. One such service is the reason we’re winding our way towards the light in the back of the building – a Hearts Apart Meeting.

Hearts Apart was formed to keep families connected while the military members are serving abroad. Services include things like video teleconference “morale calls” in a time before everyone carried a multitude of video chat services in their pockets. They also provide a four hour babysitting service called “Give Parents a Break,” a free oil change and safety check for your car, and a monthly support group.

Dinner and a chance for the children to play are the primary selling points and the reason I can feel the stink eye being directed at me by “The Boy.” Dinner is cow beef burgers and cheese pizzas, neither being things The Boy can eat due to dietary restrictions – restrictions explained to the group leader prior to the meeting which were met with the polite equivalent of “too bad, so sad.” [As dietary concerns have increased over the years, these groups do a much better job of addressing this now]. He doesn’t care about being able to eat but he very much cares that the children he’s expected to play with are significantly younger and he was perfectly happy playing video games at home before I dragged him here. I tell him sorry dude with my eyes and turn to the women gathering in a frazzled half-circle on the other side of the inedible food.

If this were a 12-step program, the steps would be something like complain, bitch, gripe, kvetch, cavil, carp, deprecate, fret, whine, lament, grouse, and bewail. There are plenty things to complain about during a deployment. It’s a well-known fact that all the things the deployed spouse is uniquely qualified to fix, break within five minutes of their plane leaving the tarmac. Significant health issues prefer to reveal themselves mid-deployment. Children sense weakness in the pack and attack.

I stopped attending after that first meeting and met with other Hearts Group Adverse spouses instead. We didn’t want to sit around complaining – we had things to do. We distracted ourselves by learning new skills like quilting, sewing, knitting, and other arts. We took college courses. We got jobs. We laughed about how we “put the weed eater in the yard but it wasn’t eating any weeds,” and cracked jokes about how many appliances the spouses needed us to show them how to operate, rather than the reverse, as suggested by the deployment checklist.

We learned to improvise. When CE (civil engineering) refused to cut down the tree branch before it crashed through the front window, I found a way to do it myself, involving lot of jumping and chopping with a rusty pair of hedge clippers. Instead of single parenting in a medicinal stupor, I used avoidance to mitigate my chronic cold urticaria. When I couldn’t bend or lift due to severe degeneration and arthritis in my back, I shoved the television, which stopped working immediately after his departure, as if on cue, down three flights of stairs and worked through the pain to prepare the household goods for the moving company. I bought our first house. I never acted on my impulses (and therefore avoided being arrested) to shout at couples in the park holding hands or dads pushing laughing children on swings. Do you know how lucky you are? Do you?

Your relationship is in limbo. It isn’t divorce or death (you hope). You can’t stuff it in a box and push it down the stairs and move on with your life. Part of you is on pause while simultaneously your lives hurtle forward in time and space being rebuilt cell by cell and unshared experience by unshared experience. You grow accustomed to the middle of the bed, the quiet in the morning, doing everything by yourself. You figure out how to live without him but here he is, and you are glad, but what do you do now? And here he is ripped from his routine, his world which was small and contained but also vast and uncharted. Here he is watching the side of the road for IEDs and everything is too loud and everyone is talking too much and there are too many food options. He is a stray dog you are approaching.

The military offers marriage retreats for returning spouses. A nice stay in a hotel, filled out with workshops about communication, utilizing the same 90s videos and training you experienced 20 years ago at the beginning of your marriage. Videos that don’t age well and feature women who “need a translator because they just never say what they mean!” and men who apparently only exist to watch sports and scratch their nuts – simpletons who can’t pick up on social cues. The military also offers other counseling which varies in quality. Their semi-useful attempts at training for reintegration give you somewhere to start and you figure it out – or you don’t.

Over the years, the prevalence of means of communication, except in the most remote situations, help to lessen the blow and close the distance between you. Now you don’t have to turn your life upside down and live his schedule in your time zone so that you can sit by the phone in case they get a 5 minute call. MMRPGs like World of Warcraft, allow couples to spend virtual time together – although much of the time is spent listening to them complain about their latency and how you’re doing the daily quests in the wrong order and messing up the system – look bud, I’ll “Remember the Sunwell” my way and you remember it yours ok? Google fu provides tutorials or resources for fixing that broken thing.

It still isn’t easy. You still want to at least growl at couples playing kissy-face. There is still a distance between the military member and the kids – still missed birthday and anniversaries and sports/concerts/dances etc. They still grow and change on their own separate trajectories. You still feel like there are places inside them you will never see. But that’s true of all of us isn’t it?