You are here: Home / Food & Recipes / Tales from the Big Tent (Open Thread)

NY-14 Rep. Alexandria Ocasio-Cortez had a virtual townhall on Friday and had this to day about President Biden and the administration: [USA Today]

“One thing that I will say is that I do think that the Biden administration and President Biden have exceeded expectations that progressives had,” Ocasio-Cortez said during a virtual town hall. “I’ll be frank, I think a lot of us expected a lot more conservative administration.”

Ocasio-Cortez, a vocal member of the progressive wing of the Democratic Party, also said Biden’s willingness to collaborate with more progressive members “really impressed” her, and despite areas of disagreements, the administration’s conduct has been “not just in good faith but active incorporation of progressive legislation,” Ocasio-Cortez added.

“Biden announced that he plans to cut emissions by half by 2030,” Ocasio-Cortez said. “I don’t think it’s an exaggeration to say that two years ago it was almost unthinkable to think that Joe Biden would be making an announcement like that.”

During the campaign, Biden set a goal of zero emissions by 2050, so the half by 2030 target isn’t an “unthinkable” acceleration of the stated timetable, IMO. But it’s true the needle has moved on party consensus for seriously addressing climate change. Good!

In personal news, I got stung by something on Friday. I think it was a horsefly; one was allegedly seen leaving the scene of the crime. Had a nasty reaction to it, as I often do when bitten by venomous insects or arachnids. I probably should not live in a swamp, but here I am.

Yesterday, I did a shopping run and then loafed around, keeping the affected arm elevated and taking Benadryl to address the symptoms. I watched two bad movies on Netflix: “Stowaway” and “Crimson Peak.” Neither is recommended. “Stowaway” in particular was a pity because the actors are really good and deserved better material.

Recommended viewing on YouTube for those who enjoy cooking  shows: “Buon-A-Petitti,” which features an Italian grandma living in New Jersey who cooks traditional Italian meals for her apparently very large family. Also, “Pasta Grannies,” which is a series about grandmas (and a few grandpas) making pasta from scratch and a variety of sauces, mostly in Italy.

I find these shows comforting in a similar way that the Great British Bake-Off episodes are comforting, or at least were in the old days before Mel, Sue and Mary Berry decamped, then Sandi left, and then they brought in the weird, awkward, vaguely creepy guy.

It’s a rainy morning in Camp Swampy. I’m making a blueberry pie since blueberries are in season and I picked up a vast quantity of them yesterday at a produce market. I’ll update the post with a photo of the pie when it comes out of the oven.

I believe this will be my first blueberry pie. I’ve made blueberry cobbler many times but never a pie, at least not that I recall, and wouldn’t that be something a person would remember? The mister does most of the baking around here.

Anyhoo, the recipe I’m using advises bakers to let the pie cool for a full three hours before slicing to give it time to firm up. We’ll see how that goes. How’s your Sunday going? 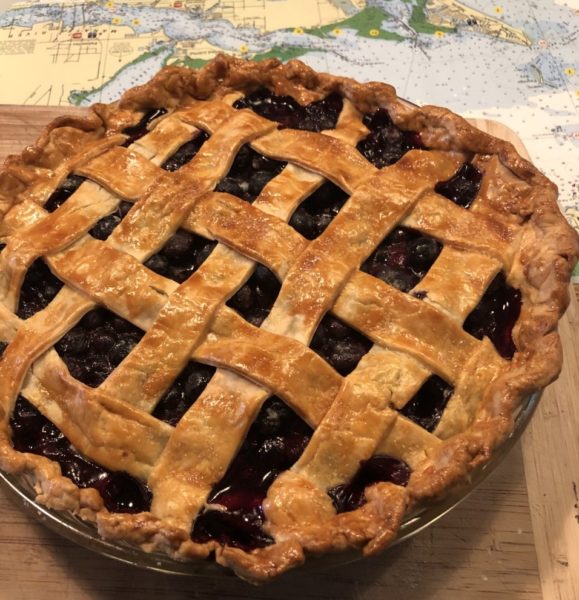