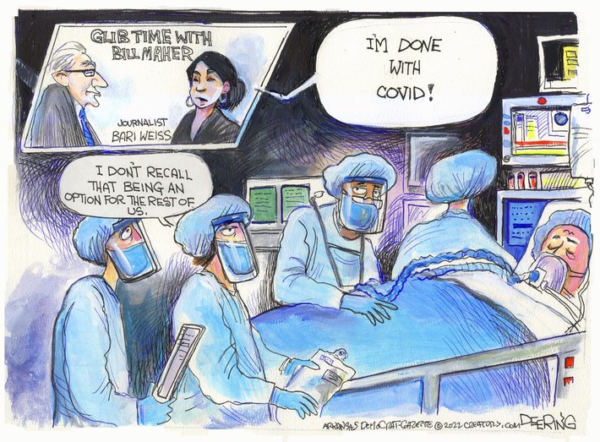 Covid-19 transmission may have seasonal spikes tied to temperature and humidity, increasing at different times of the year for different locations, a new study suggests https://t.co/tFKp8JfaEH

Covid-19 transmission may have seasonal spikes tied to temperature and humidity, increasing at different times of the year for different locations, a new study in the American Journal of Tropical Medicine and Hygiene suggests.

Jutla and his colleagues found that coronavirus cases in 19 hot spots worldwide increased above and below certain temperature and humidity thresholds because of human behavior and the virus’s movement as an aerosol. Case numbers spiked when air temperatures dipped below 62 degrees (17 Celsius) or above 75 degrees (24 Celsius). The virus also tends to linger more in drier environments compared to humid ones.

“We need to basically design the intervention or mitigation strategies based on the environment in which we live,” Jutla said. “Regions like Florida, India, Africa — they are warm regions. … They basically get hit by these waves, but at different times than what happens in the northern parts, the colder regions.”…

Aerosol researcher and co-author Chang-Yu Wu explained that local humidity and temperature play vital roles in the size of the virus’s particles, which can influence its life span in the air. Drier atmospheres in colder regions will induce water evaporation from the particles, shrinking their size and allowing them to float in the air for longer periods. People also tend to seek shelter inside in colder environments and expose themselves to recirculated air that potentially contains the virus.

The air in humid, hotter environments contains more water, which can condense onto the virus particles, make them bigger and theoretically fall to the ground faster. Wu compares the particles to a rock in this case — the more mass, the faster it falls. At the same time, people often move inside to avoid the outdoor warmth and again expose themselves to recirculated air. Air conditioners also dry the inside air, creating an environment similar to that of winter for aerosols…

“For me, the biggest takeaway is the need to focus on the built environment,” Zaitchik wrote. “It’s not simply a matter of ‘is it cold out’; it’s a matter of whether those cold temperatures are leading you to crowd indoors, reduce ventilation, use climate controls that result in low indoor humidity, etc.”…

Incidence of #Omicron infection continues to fall in most of the USA, but deaths are rising. Nearly all, in unvaccinated individuals. pic.twitter.com/6ZLzOQemNJ

And mostly what we get from elite media figures at the New York Times and Atlantic Monthly is scoldings about how taking precautions against COVID is “irrational.” https://t.co/2es8inxAvd

On average, a major new #COVID19 variant has been detected every four months. The next major variant to emerge could be both highly transmissible and cause more severe disease or greater evasion of vaccine immunity. This risk is higher while billions remain unvaccinated.

This means the #COVAX AMC must be able to order doses now so they can be available to lower-income countries as soon as needed. Upfront funding is an urgent priority to increase supply predictability & have delivery funds to turn vaccine deliveries into vaccinations. #breakCOVID

Russia’s daily count of new coronavirus infections has spiked above 110,000 as the highly contagious omicron variant spreads through the vast country. It was a sevenfold increase from early in the month. https://t.co/cD7ThgDhbI

SARSCoV2 cases soar by 100,000 in Russia in a single day. Even as the country is increasing tensions with the Ukraine, Russia itself is being increasingly attacked by Covid https://t.co/5gpPA9b7cE pic.twitter.com/4iulKflmAU

The Omicron wave in the US vs 6 European countries
2-7 fold increase in death
2-8 fold increase in hospital admissions
40-50% less booster rate and absolute 10-20 per cent gap in 2-shot vaccination %@OurWorldInData pic.twitter.com/x59O326Ust

Austria will loosen virus restrictions in stages in February after a national vaccine mandate takes effect on Tuesday. https://t.co/WEVSDSUgBv

Thousands of demonstrators gathered in the Canadian capital of Ottawa to protest vaccine mandates, masks and lockdowns.
Some danced on the Tomb of the Unknown Soldier at the National War Memorial, others carried signs and flags with swastikas. https://t.co/ZTDVPEBayW

… The convoy of truckers and others prompted police to prepare for the possibility of violence and warn residents to avoid downtown. A top Parliament security official advised lawmakers to lock their doors amid reports their private homes may be targeted.

Trudeau has said Canadians are not represented by this “very troubling, small but very vocal minority of Canadians who are lashing out at science, at government, at society, at mandates and public health advice.″…

Canada has one of the highest vaccination rates in the world and the premier of the province of Quebec who is proposing to tax the unvaccinated is popular.

Some are, in part, protesting a new rule that took effect Jan. 15 requiring truckers entering Canada be fully immunized against the coronavirus. The United States has imposed the same requirement on truckers entering that country.

The Canadian Trucking Alliance said a great number of the protesters have no connection to the trucking industry, adding they have a separate agenda to push. The alliance notes the vast majority of drivers are vaccinated.

The Shepherds of Good Hope, which has a soup kitchen for the homeless in Ottawa, reported staff and volunteers “experienced harassment from convoy protestors seeking meals from our soup kitchen. The individuals were given means to defuse the conflict.”…

“Both the use of the swastika and the confederate flag are symbols of hate. So very sad to see these symbols anywhere and especially in Canada,” said Heyman, who was the U.S. envoy under former President Barack Obama.

The Parliamentary Protective Service expects as many as 10,000 protesters as part of a weekend-long rally…

People w/#diabetes are especially vulnerable to #COVID19 death. And, conversely, #SARSCoV2 infection can cause diabetes. The virus causes direct damage to the pancreas — the sugar processing center of the body.https://t.co/U8n8M1lGD5

SARSCoV2 can remain active in the body much longer than recommended quarantine periods: "We wanted to know if a period of 14 days was really long enough for the virus to stop being detectable. We concluded it wasn't," said Paola Minoprio, lead investigator https://t.co/BPEv6wSDWm

Does #omicron pose as much of a blood clot threat as other variants? While more data are needed, the clot risk seems to have dropped. Dr. Peter Faries of Mount Sinai in NYC says the level of clotting complications in earlier surges is not evident now https://t.co/mBgE6V1FVQ pic.twitter.com/airxey3wSO

One year after, 246 #COVID19 survivors treated in ICUs in the Netherlands:
– 75% reported lingering physical symptoms
– >26% said they had mental symptoms
– 16% still had cognitive issues#LongCovid https://t.co/2pQYTuMptt
andhttps://t.co/lAWMpY01AW

The #SCOTUS decision blocking OSHA from imposing #vaccination mandates on big businesses shifts the burden of #COVID19 control from the federal govt to the corporate world — leaving companies to decide the fates of local hospitals & health systems.https://t.co/n8zxfElmwY

“What’s next for you, other than being a celebrity now?” Laura Ingraham asked state trooper who quit rather than get the vaccine. The answer turned out to be dying of Covid. https://t.co/3MVWEzMz8w

once again, people VACCINES ARE FREE AND THEY GIVE YOU A NICE, LEGITIMATE CARD https://t.co/mkduqCCkad

So the NY Post story about the nurses selling fake vaccine cards doen't name the cop who was part of the ring. The cards were stored in NYPD helmets and being sold to cops. They found $900,000 in his house but let him go. His name is Devin De Vuono.https://t.co/uqK3ylxJEP

it blows my mind that there are still people On Here pretending to ask earnestly whether there is any evidence the vaccines work or make an aggregate impact. it is not even a question at this point. there is no "just asking questions" https://t.co/1BYzuZY2hK

you can be curious and willing to have a conversation with anyone. but when you treat every piece of information as equally valid (or actively embrace incorrect information), that ain't great

/2 Fraud is lying about the product to sell it, that’s not protected. If people want to tune in to Fishsticks Goebbels and the various versions of Wannsee Barbie and be congratulated for who they hate and fear, that’s not fraud, it’s selling shitty people what they want.

A Republican calling for the eradication of the virus *would* be big news https://t.co/tXJZI22RW3 pic.twitter.com/0FASSjRGh2