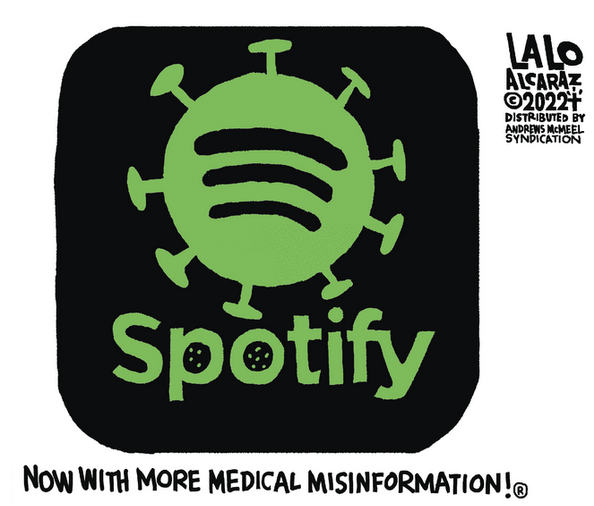 Neil Young released Harvest in 1972 and Joni Mitchell released Blue in 1971 and people still pay to listen to those songs. No one is going to be replaying Joe Rogan podcasts 50 years from now. He has to keep feeding words into the big bullshit machine or his audience goes away, because cheap junk doesn’t last. – Kay

Joe Rogan is TFG in a hoodie and jeans — a television-made ‘celebrity’ tickling an audience of resentful racists by ‘just saying’ all their favorite slurs & fantasies out loud. Vanity Fair:

… Rogan—who recently hosted Robert Malone, a controversial medical doctor and infectious-disease researcher who promoted a “mass formation psychosis” conspiracy theory, on his podcast—apologized to Spotify and thanked the company for supporting him. “I’m very sorry that this is happening to them and that they’re taking so much heat from it,” Rogan said on Sunday in a 10-minute video statement posted on Instagram. Spotify obtained exclusive rights to The Joe Rogan Experience in 2020, when it struck a reported $100 million deal with Rogan. Financially, that contract has paid off for Spotify, as Rogan’s show and his millions of listeners have played a key role in helping the tech company’s plan to grow its user base through podcasting. But Spotify’s association with Rogan has also caused the company headaches, particularly due to his pandemic-related content, such as when Rogan endorsed the use of ivermectin as a treatment for COVID-19 and advised “healthy” young people not to get vaccinated. (Rogan did clarify that he’s “not an anti-vax person” after the White House shot down the latter claim.)

Rogan has largely remained unshaken throughout his past controversies. In August, Ek made a public stand in support of the podcaster’s creative independence, stating that Spotify will not censor the content of Rogan’s show. But that tune seemingly changed in light of Young and Mitchell’s boycott of Spotify—protests that came after Rogan’s recent episode with Malone, in which the guest made “several falsehoods about COVID-19 vaccines,” according to the open letter from medical experts. (Malone had already been permanently suspended from Twitter and saw an unofficial upload of his podcast episode with Rogan swiftly removed by YouTube.)

“If there’s anything that I’ve done that I can do better is have more experts with differing opinions, right after I have the controversial ones,” Rogan said on Sunday. “I would most certainly be open to doing that. I would like to talk to some people that have differing opinions on those podcasts in the future. We’ll see.” He went on to say that while he schedules his own guests, he does not “always get it right.” Rogan also noted that his intention with the show has always been “to create interesting conversations and ones that I hope people enjoy,” adding, “I’m not trying to promote misinformation, I’m not trying to be controversial. I’ve never tried to do anything with this podcast other than to just talk to people.” …

Rogan’s not an ideologue, he’s just another media whore. He gives his audience what it wants — watching people eat bugs or get kicked in the head, spouting racist rhetoric, medical misinformation — as long as he’s paid up front.

This here's a company that is panicking.https://t.co/OKrMXl09UI

IMO, depending on whether other high-profile artists join Neil Young and Joni Mitchell, this is still a quite possible outcome…

My guess? They work out a deal where he gets to say he was Fired For Truth™, he gets a big cut of that money, signs another, non-exclusive deal with a small, right-wing streamer like Rumble, then largely goes back to being every teenager's third click in the YouTube algorithm.

… which is a pity, because it’s not just Rogan who’s the problem here.

our stupid band gets close to a million monthly streams on spotify. spotify pays out .003 cents per stream. 100% of that goes to our former label sony who is a part owner of spotify. this is why i’m mad

this is not a culture war issue for most artists it’s a material one. i cannot feed my kids with “spotify exposure”

thank you guys for your solidarity and your support. it’s been frustrating seeing this story get painted as a culture war thing. we are trying to shift the narrative. joe rogan is only important in that he highlights spotify’s absurdly exploitative business practices

Previous Post: « Monday Evening Open Thread: Giving Their Voters What They Asked For
Next Post: On The Road – BretH – A Walk in the Park – Ivy Creek Natural Area