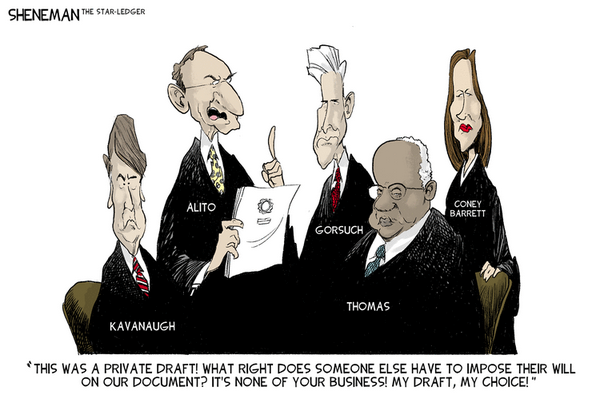 It’s a bracing thing being lectured by Justice Thomas about declining respect for the rule of law so soon after he and his wife were part of a plot to overthrow the government. https://t.co/0aw12cFaGQ


Great news on this one, sir, they absolutely never are. https://t.co/C6RbOXFTMO

Heere come the minions of the GOP Death Cult…

“Roe v. Wade made men like me unfuckable” isn’t the argument you think it is https://t.co/YUx4SexWb2

This is exactly and literally the argument — that accidental pregnancy binds men and women into a particular life pattern, and that is a happy outcome.

This is unfair. Douthat is eminently qualified to write creepy, repressed, Falangist screeds.

Now, why the NYT believes said screeds qualify for publication is another question entirely. https://t.co/YG8SxrGAYT


Letting women vote — that was our big mistake. The 19th Amendment, almost as bad as the Fourteenth!

The ensuing electoral nuclear bomb won't just be about abortion, it will also be about Republicans feeling free to say the things out loud that they only said in private before. Imagine a thousand "legitimate rape" lines, all at once.

actually boiling you alive is hardest on the chef, somebody leaked the menu early, imagine the pressure I’m under!

Right after the magical "everyone gets along" summer of 1968.

Stephen Colbert: “If these folks believe Roe was so egregiously decided, why didn’t they tell the senators during their confirmation hearings? Because Americans support abortion at 80%. They knew that if they were honest they wouldn’t get the job, so they lied, which is perjury.” pic.twitter.com/VomBYlWcS8