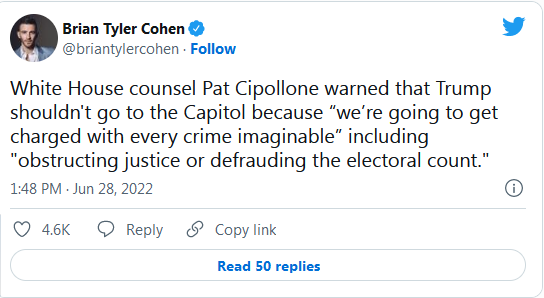 The Select Committee has subpoenaed former White House Counsel Pasquale “Pat” Cipollone for deposition testimony as a part of the committee’s investigation into the January 6th attack on the U.S. Capitol. pic.twitter.com/VjZsHlIqkD 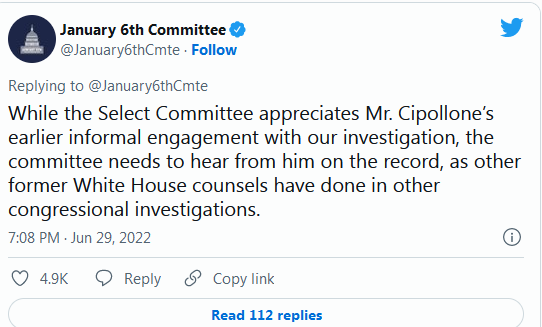 Unlike most of the JD-holding mooks and lunatics in TFG’s orbit, Pasquale ‘Pat’ Cipollone has a reputation as a competent lawyer who knows the difference between ‘what the statutes say’ and ‘what we want the rules to be’. This is, no doubt, why he has so far avoided an official interview.

This is also why he may not be, as a defendant, totally averse to such an interview at this point in time.

Pat Cipollone has no valid privilege or immunity claim to raise, and "I don't want to hurt the hand that fed me and might feed me again" isn't technically an excuse for refusing to comply with an obviously valid demand for testimony under oath. https://t.co/6lqGpfOyd7

… The morning of Jan. 6... Cipollone restated his concerns that if Trump did go to the Capitol to try to intervene in the certification of the election, “we’re going to get charged with every crime imaginable.”…

Rep. Adam Kinzinger, R-Ill., who sits on the committee, said last week that Cipollone told the committee he tried to intervene when he heard Trump was being advised by Jeffrey Clark, a former Justice Department official who wanted to push false claims of voter fraud. Federal agents recently seized Clark’s cell phone and conducted a search of his Virginia home.

Clark had drafted a letter for key swing states that was never sent but would have falsely claimed the department had discovered troubling irregularities in the election. Cipollone was quoted by one witness as having told Trump the letter was a “murder-suicide pact.”

No reason Cipollone shouldn't show up. He can always object to questions that would elicit legitimately privileged information. But at this point, who are you going to protect–the former president or the Republic? https://t.co/fNCupdjxne

… Cipollone, who many former administration officials credit with helping to prevent Trump from taking legally questionable actions in the months around the 2020 presidential election, has long been considered a key witness by the committee. He has resisted talking further with the committee after previously sitting for a closed-door interview on April 13.

The committee said in its subpoena letter that it has obtained evidence that Cipollone is “uniquely positioned to testify” but he has “declined to cooperate” past that interview, leaving the panel with “no choice” but to issue the subpoena. During recent public hearings, members of the panel have publicly pressured Cipollone to testify. The committee is now taking the step to issue a subpoena in an effort to force his formal cooperation…

Not long after the rioters broke into the US Capitol, Cipollone rushed into then-White House chief of staff Mark Meadows’ office demanding a meeting with Trump, Meadows aide Cassidy Hutchinson told the January 6 committee this week.

“I remember Pat saying to him something to the effect of, ‘the rioters have gotten to the Capitol. We need to go down and see the President now,’” Hutchinson said in a videotaped interview.

“And Mark looked up at him and said, ‘He doesn’t want to do anything, Pat,’” she said.

Cipollone, Hutchinson added, emphasized to Meadows the need for action to control the situation to Meadows. She said Cipollone “very clearly said this to Mark – something to the effect of, ‘Mark, something needs to be done or people are going to die and the blood’s going to be on your f**king hands. This is getting out of control. I’m going down there.’”…

… Cipollone has been mentioned often over the past month as various witnesses who have appeared in the committee’s public hearings have cited his steady presence in off-the-rail meetings and sage, though at times unwelcome, legal advice. But he has remained invisible to the American public, neither agreeing to sit for taped interviews nor appearing as a live witness at a committee hearing.

The committee is hoping that soon changes. Cheney, in particularly, has been determined to secure Cipollone’s cooperation — so far without luck.

But the subpoena may provide cover for Cipollone to cooperate with the committee, as Trump and his allies have sought to keep those in the former president’s orbit from providing the committee with potentially damaging information…

Tuesday’s surprise hearing was designed in part to ramp up pressure on reluctant witnesses such as Cipollone, according to those involved with the investigation, who, like others quoted in this story, spoke on the condition of anonymity to describe internal deliberations. One of those people said there has been a behind-the-scenes strategy to get other witnesses to testify — particularly Cipollone.

“He can probably give the best overview of how [former White House chief of staff Mark] Meadows, [former Trump lawyer Rudy] Giuliani and Trump were told what they were doing might be illegal,” said a person involved with the investigation…

Another well-known former White House counsel, who did ultimately testify to Congress about his role in the coverup of the Watergate scandal, said he believes Cipollone has a moral imperative to cooperate with the committee.

“He has taken an oath to protect and defend the Constitution on three occasions, twice when he was admitted to the bar with licenses he still holds, and once when he took the job of White House counsel, and I think oaths are serious matters,” said John Dean, Richard M. Nixon’s former counsel. “Here’s a man with 10 children. And I would think he’d want them to remember him as somebody who defended democracy for them.”

(To quote a vintage crime-novel trope: A man with 10 children can’t afford to spend years behind bars.)

War For Ukraine Day 126: President Zelenskyy Addresses NATO, NATO Releases Its New Strategic Concept, and (Some of) the Defenders of Mariupol Are Returned Home
Next Post: Most Excellent News