Madam @vp being greeted with thunderous applause by more than 13,000 members of her beloved sorority! #AKABoule2022 #AKAExcellence pic.twitter.com/uGfVmcafuu

Harris’ appearance comes at a time when our freedom is in the balance. Black women have long been an integral part of the backbone of the Democratic Party, & mobilizing the resources of this network will play no small part in confronting the challenges we face in midterms &beyond 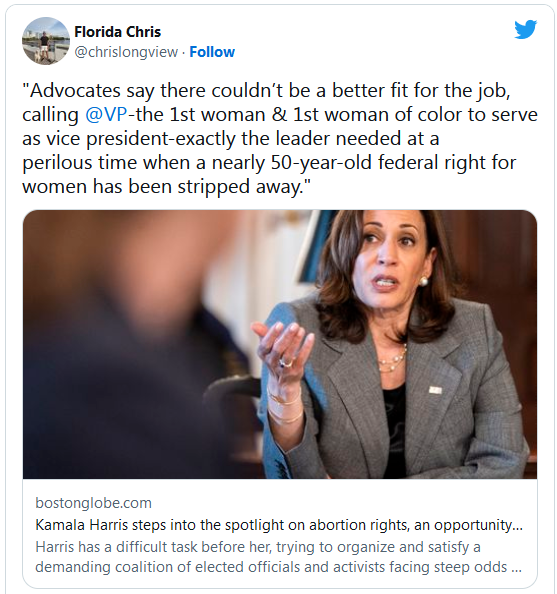 … Harris has a difficult task before her, trying to organize and satisfy a demanding coalition of elected officials and activists facing steep odds of restoring abortion rights nationwide. And there are questions about whether an administration led by a president she once criticized as behind the times on abortion rights — a Catholic who once described his views on the issue as “middle of the road” — will be willing to go far enough for the mission to succeed.

“Every crisis gives leaders a chance to be known in another context,” said Massachusetts Senator Elizabeth Warren, a Democrat. “And overturning Roe is the crisis of the past half century. Many people will get to know Kamala again through this fight. And I’m glad of that — I think she has a lot to say.”

Harris has a deep history with abortion rights, dating back to her time in California as a prosecutor and the state attorney general. Her focus has intensified since a draft of the opinion in Dobbs v. Jackson Women’s Health Organization was leaked in May showing the court’s conservative majority was poised to overturn Roe. In fact, the day before the final court decision was released in June, Harris hosted seven Democratic state attorneys general at the White House to discuss ways they could use their authority to mitigate the impact of such a ruling.

Since late last year, Harris has held more than 10 meetings, calls, or events with different figures in the abortion rights movement, including state lawmakers, attorneys general, activist groups, medical providers, faith leaders, and privacy experts. Her staff has been included in most White House meetings on the issue. She’s taken the administration’s message to four states already, with significantly more travel expected. People who have attended those meetings said Harris has done a lot of listening and asked others to share what they’re experiencing on the ground, as well as prodding them for ideas about what to do next…

Harris’s staff says she is looking into all avenues to produce results, but that most significant change is going to require voters exerting their power in elections.

“She looks at it as the various levers you can pull,” said Josh Hsu, counsel to the vice president. “The focus on the states is not by accident; it’s where you can get something concrete done in the moment.”…

”I think that people are ready and honestly in need for her to be the leader that we all know that she can be,” said Amanda Brown Lierman, executive director of Supermajority, a progressive women’s advocacy and political organization. “[It’s] a tremendous opportunity for her, but also for women across the country to … give her the backing and the confidence to get this over the finish line.” 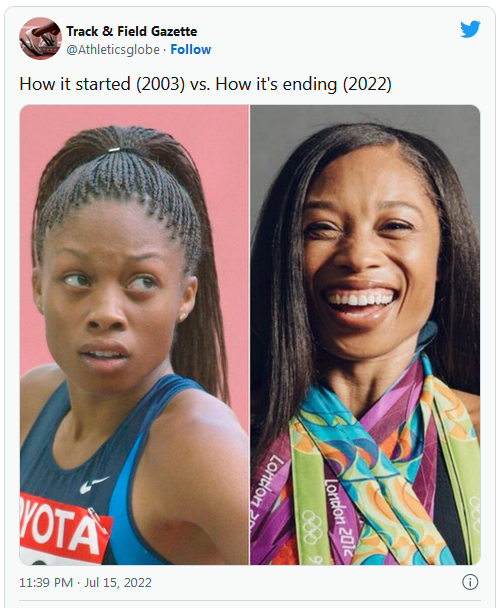 Today, Allyson Felix bids farewell to professional competition. We will miss you on the track, @allysonfelix! ?? pic.twitter.com/UOzCDQ2dLQ