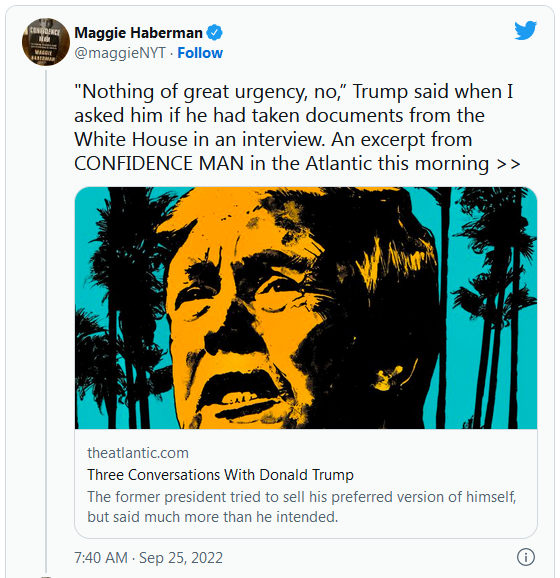 The biggest NYT scandal of our lifetime – far worse than Judith Miller and Jayson Blair. Their reporter knew a year ago, and covered it up for a payday. Blame the paper. It's the publisher's disgraceful policy to allow this perfidy. pic.twitter.com/wYhpsq2py5

Haberman knows her behavior is, at best, unethical… but who’s gonna pay her the big advance dollars if she gives up her hard-earned insider info for a reporter’s salary?

… For much of the past decade, reporting on Trump has been my full-time job as a correspondent for The New York Times. To fully reckon with Donald Trump, his presidency, and his political future, people need to know where he comes from. The New York from which Trump emerged was its own morass of corruption and dysfunction, stretching from seats of executive power to portions of the media to the real-estate industry in which his family found its wealth. The world of New York developers was filled with shady figures and rife with backbiting and financial knife fighting; engaging with them was often the cost of doing business. But Trump nevertheless stood out to the journalists covering him as particularly brazen…

trump says a lot of things, most of which are bullshit, but i have to think that this is not something that the subject of reporting should ever say about the reporter covering them https://t.co/LDmPXkXqdM

She also has a vested interest in having a person who sees her that way continue to be politically relevant.

Most large companies require at least salaried employees to obtain approval for outside business ventures.

Do reporters obtain management approval to withhold for their own business use information they learn in the course of NYT reporting?

if you know that mitch mcconnel has confessed to the jack the ripper murders but you sit on it until your book comes out, well, ok, that is between you and your conscience

this is also true imo if you are positioning yourself as the NYTs ripper murders expert while the NYT is publishing articles saying "ripper kills again, identity still unknown"

Journalists and cops have the exact same siege mentality that makes them defend the worst among them, without realizing they're actually weakening their institution.

of course, it is always possible that sources like trump won't talk *at all* without the assurance that the interview won't be used for anything but a book, or some other delay

better to have info out later rather than never? maybe, maybe not. who knows whether that was the case

when we, the media, circle the wagons rather than show introspection it hurts trust and prevents us from learning

War for Ukraine Day 215: If You Live Between Bradenton and Naples & You’re in a Flood Zone, GET OUT NOW!!!!
Next Post: On The Road – Dangerman – More Lighthouses