The ACA plan offerings and premiums have been released.

Window-shopping has started on Healthcare.gov.

Texas is having a massive affordability shock as most current enrollees in the state will now be exposed to a zero premium GOLD plan. Texas changed state law on how they priced Silverloading so Gold and Bronze plans became comparatively less expensive relative to Silver. 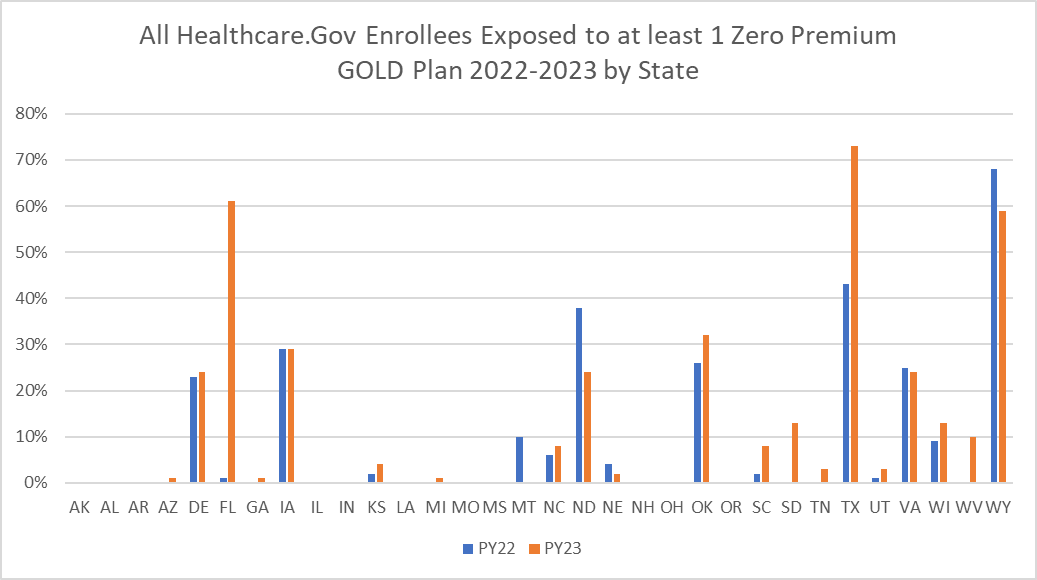 Now not everyone should want to be in Gold. People earning under 150% Federal Poverty Level (FPL) qualify for zero premium plans with massively less cost-sharing. People earning between 151% and 200% FPL can buy Silver plans with less cost-sharing and a bit more premium than a zero premium Gold plan. At this income level it is a risk-reward trade-off that is a matter of individual preferences.

Over 200% FPL, Gold likely dominates Silver where Gold from the same insurer on the same network has both lower premiums and less cost-sharing than the comparable Silver plan. Dominated plan choice is inefficient and expensive to the consumer.  There can be softer/weaker superiority scenarios where most elements of Gold are better than Silver where the decision gets fuzzier again.

My co-authors and I have always looked at this problem from a consumer angle. People pay more to get less. That is bad.

We also need to think about this from the federal perspective. If a dominant plan is zero premium for a given individual but that individual is either automatically re-enrolled or actively chooses the dominated plan, there is “excess premium subsidy” from “metal tier selection.” In the case where the dominant plan is zero premium, but the federal government is subsidizing the dominated plan, the federal government is spending a lot of extra money to buy an objectively inferior product.

Let’s take an example from the Houston market for 2023.  Our target individual earns 202% FPL and are enrolled in 2022 Community Health Plans Community Select Silver plan.

Under the current automatic re-enrollment system, they would be defaulted to plan ID 27248TX00100019 which is the same plan that they chose from last year.  They would pay a premium of $49/month if they do nothing for a plan with a $3500 deductible and a $7200 out of pocket max.  The federal government pays a subsidy of $396 per month for this plan.

If the default is to place people in zero premium plans with higher AV than the current year plan from the same insurer with the same network, this individual would be placed in the Gold plan with plan ID 27248TX00100022.  This plan for this person has a $0 premium.  It has $2200 deductible and a $9100 out of pocket max so this is not strict domination as the Silver CSR 73 plan has a lower OOP but under most spending scenarios, Gold is better than Silver.  The federal government would only pay $393/month in subsidy for this plan.  The individual saves $49/month and the feds save $3 a month for the default.

In a static simulation, improved plan defaults to higher AV but zero premium plans likely saves the federal government money.  In a dynamic scenario  where we assume zero premium plans reduce administrative friction and thus increase enrollment duration and retention, total federal spending may not decrease. But this should be investigated.

Previous Post: « Thursday Morning Open Thread: Moving Fast, But Prudently
Next Post: Jennifer Rubin: Republicans have shown who they are. Voters should believe them. »