Don’t leave Twitter bc you think you’re creating value for Musk. Stay at Twitter bc you’re here for free while he loses billions. Maybe his actions will end it for all of us. But it would be great if us people who do what makes Twitter great outlast him & have the final word

Aaron Rupar, and at least some of his fellow banned journalists, are back on Twitter. The news organizations they work for tweeted right through yesterday’s controversy… because, at this particular moment, Twitter is not replaceable for them. And, apparently, Twitter can’t do without them!

Freedom of speech according to Elon… pic.twitter.com/WhzlU2PxTe

… Online reactionary politics is a fan community before it is anything else; as with Donald Trump, the way to tell that Musk is an active participant is how obviously starstruck he is by the corny dingbats that make up its firmament. Where Trump lived for the approval of Fox News’s glitching poreless on-air goblins, Musk has been queasily quick with an “exactly” in the mentions of various reactionary influencers: the anti-trans activist that solicits bomb threats to children’s hospitals, or the one fellow from the Koch-backed Turning Point USA organization whose face seems to be shrinking, or Cat Turd 2. If it is embarrassing to know who these people are—and it is extremely embarrassing to know who those people are—it is more embarrassing still to have mistaken these relentlessly self-serving grifters for friends.

What all of that decidedly is not, however, is mysterious. Musk’s politics, however heterodox he himself might secretly be, appear very much to be those of an extremely wealthy 51-year-old man with an entirely commonplace conservative media diet. There are only so many interesting ways and even fewer interesting reasons to adopt these politics; the most common one, which again is the one that Musk seems to have chosen, is to simply let the combined inertia of your circumstances and incuriosity back you into them. That he is now someplace so strange—winking at QAnon shit, already—seems mostly to reflect how conservative politics have moved in that direction; Musk, typically, seems not to have given any of it much thought. The extremities of his wealth and strange upbringing, and his personal peculiarities and the limits of his capacities for empathy or insight all probably played some role, but this is true of every other butthead that ever aged into reactionary politics. In time, these people realize what they actually believed all along and embrace what has always mattered most to them. In this sense, too, Musk’s little blurts of umbrage and upset are just like those of all the other reactionary pilgrims on their own lonely journeys. Separately but in unison, they slough off everything and everyone that is not them, either out of principle or pique or just because they find themselves losing interest; instead of talking to the people they used to talk to, they just shout at everyone. Twitter has always been a good place for that.

The novelty, if there is any, is that Musk is a little young for this. But Generation X, which came of age in a moment of political stagnation and cynicism and drift—and, for Musk and his cohort, came into mind-bending wealth through hitting it big on some technologies that have not on balance changed humanity for the better—has been spiking to the right for reasons that seem to go beyond the normal trend in that direction as people age. Forged amid a dead consensus of center-right managed decline, they did not really have much chance to participate in public life at a level above the affective, or theatrical. There was still politics—there is always politics—but it unfolded along a meaningless Coke/Pepsi binary.

Socialism and barbarism are now both back on the menu, and each on the ascent. But for members of a generation who saw their politics as inseparable from themselves without ever thinking nearly as hard about the former as they did about the latter, this is all still a matter of performance. Such politics are easy to change because they were never really anchored to any actual system of belief. An obliterating narcissism and sawed-off selfishness is latent in American culture like lead in contaminated water; in the absence of countervailing principles, it will naturally make its presence felt over time. If your politics is just about Opposing Authority, for instance, with no regard for or sense of the structural and material realities of actual power, then remaining true to those politics is just a matter of propping up new authority figures to rage against.

Any idiot can do that, and many idiots have. If you believe your anger is inherently righteous simply because it is yours, you might find some strange righteousnesses. The landlord is oppressed by some stranger’s preferred pronouns; the car dealership heir stands firm against the panhandler; the famous comedian is so dismayed by the mere existence of trans people that he cannot write a joke, and writes a sermon instead; the iconoclast-made-good takes up for a rich patron against critics he finds annoying; the billionaire narcissist smears his former employees and withholds their pay—because it is time someone stuck it to the elites…

…[I]t is all just right there, the wild philistinism and the bullying and the offhand cruelty, the compulsive self-aggrandizement and the giddy vengeful sadism toward everyone he believes he can get away with treating that way—all of it so oafishly performed that it could not possibly be mistaken for anything but what it is. There’s no principle to find here beyond spite and distaste; the speech is just noise cast out into the chaos by someone eager to mistake the echo for an answer. And then, even though the fact of it is so plain—and, again, so embarrassing and so implicating in its thudding overage—the mistake gets made anyway. “Maybe,” the tech podcaster Kara Swisher mused on Monday, Musk is a few steps ahead of us all, and at work “building a new kind of media company.” Leaving aside the characteristic mistake of assuming that “new” means “better,” I suppose it’s possible that what looks like flailing impulsivity and familiar old cruelties is in fact something finer and more reasoned. But it might just be what it looks like. 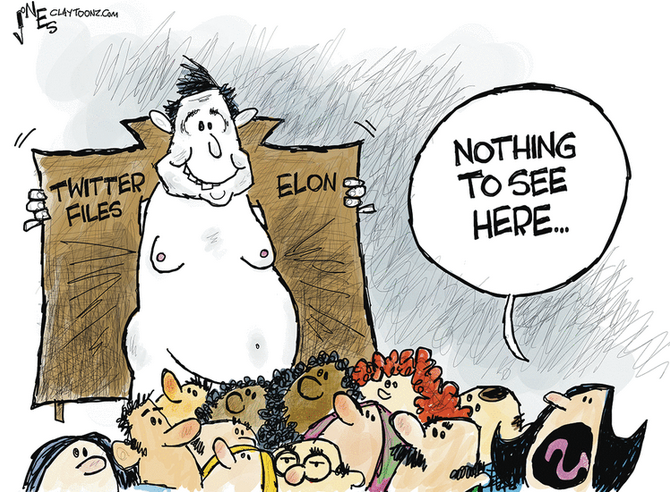 wtf, I was outside touching grass when some rich asshole bought it all up and turned it into a parking lot

Twitter is modern mass communication infrastructure. It’s like someone bought a bridge and then laughs at you for not taking another way around while they pull down their pants and crap on it.

I have another theory: this has always been who he was and he was lying before. https://t.co/oO9PaXGlXI

Previous Post: « World Cup Third Place Play-Off Open Thread: Croatia vs Morocco
Next Post: Open Thread: For All The Cat Lovers Out There