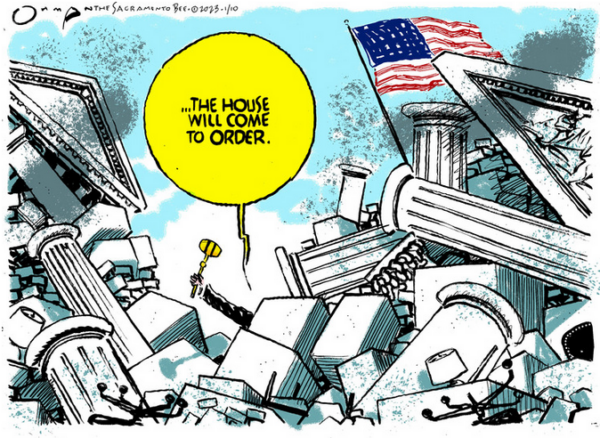 Three days ago, in his first remarks as Speaker, McCarthy vowed to "stop the rising national debt." Today, Republicans tried to rescind IRS funding, which would increase the deficit by $114 billion.

It took 3 days before they dropped all pretenses to yet again coddle the rich.

"If the President were presented with H.R. 23 — or any other bill that enables the wealthiest Americans and largest corporations to cheat on their taxes, while honest and hard-working Americans are left to pay the tab — he would veto it."https://t.co/Geuf9kde6P

The White House made its first veto threat of the new Congress Monday, targeting a House Republican bill that would rescind funding allotted to the IRS in the Inflation Reduction Act, which President Joe Biden signed into law last summer.

“This reckless bill would increase the deficit by nearly $115 billion over 10 years per an estimate by the Congressional Budget Office by enabling wealthy tax cheats to engage in additional tax fraud and avoidance,” the administration said in a statement, citing the score released Monday.

“If the President were presented with H.R. 23 — or any other bill that enables the wealthiest Americans and largest corporations to cheat on their taxes, while honest and hard-working Americans are left to pay the tab — he would veto it,” it added.

Such a bill, should it pass the House, would almost certainly never survive the Democratic-controlled Senate to reach Biden’s desk…

“Are they going to have a strike force that goes in with AK-15s already loaded, ready to shoot some small-business person in Iowa?” mused Sen. Chuck Grassley (R-IA) on Fox and Friends last summer.

It’s a talking point fully untethered from the reality of the Inflation Reduction Act. The 87,000 figure comes from an old Treasury Department report, issued before the Act became law, estimating the number of full-time employees the IRS would be able to hire by 2031 with an $80 billion infusion. Much less than funneling new funds to a supposedly rabid group of IRS agents who habitually terrorize gentle Iowans, that money would be used to hire employees spread across the agency, many in functions like customer service…

But the Republican animosity towards the IRS is nothing new. Through hearings and ginned-up scandals, the party has been aiming at the agency for decades with tangible results. The cumulative effect is an agency understaffed, using hopelessly outdated technology, that completely lacks the resources and firepower to go after top earners, many of whom hide their money and assets behind accounting trickery and batteries of lawyers.

As the White House points out in its statement — and as other, independent analyses have also noted — that means billions of dollars in uncollected taxes owed to the government…

I’ve been pushing to give the IRS the resources it needs to serve taxpayers and crack down on ultra-wealthy tax cheats. With 50,000+ workers—including many customer service representatives—set to retire soon, time has been of the essence. (2/3)https://t.co/sZBp3NFnCE

Of course, when your majority is fragile enough that a few overdue indictments could kill it, you do what you can. 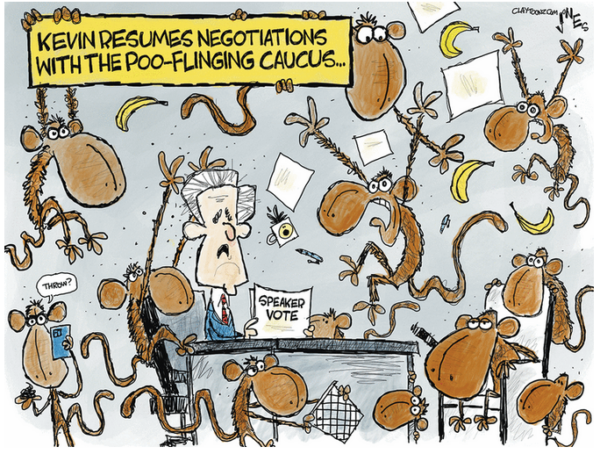 The historic chaos in the House of Representatives this past week embarrassed not only a party, but an entire nation. A small minority blocked the House from electing a leader, or even swearing in its own members. https://t.co/KxQbGackiq pic.twitter.com/l7bSW4bthr

Thousands of protesters in Rio de Janeiro and Sao Paolo demanded “No amnesty!" on Monday, a demand for retribution against those who stormed the Brazil's capital Sunday in an effort to reinstall former President Jair Bolsonaro. https://t.co/DQJ0Bgtcbl

Bolsonaro tells CNN Brasil he plans to return from the U.S. earlier than planned to see his doctors for the intestinal obstruction derived from the 2018 stabbing. He posted a photo from his Orlando hospital bed. pic.twitter.com/PNpJuvXSnt