You are here: Home / Archives for Science & Technology / Energy Policy

To those who observe, may your fast be uncomplicated and your prayers rewarding!

President Joe Biden launched the largest release ever from the U.S. emergency oil reserve and challenged oil companies to drill more in an attempt to bring down gasoline prices that have soared during Russia's invasion of Ukraine https://t.co/UT1WNRTUEi pic.twitter.com/HExuKcwT2I

Biden admin wants effectively a use it or lose it clause in federal oil leases. The industry is probably going to kick up a fuss about any new restrictions, but this is widely how it’s done in contracts with private landowners – where the vast majority of production comes from. pic.twitter.com/yE3Einrbhx

Hot off the wire:

"The economy has recuperated more than 90 percent of the 22 million jobs lost at the peak of the pandemic’s impact on the economy in the spring of 2020 — a far swifter rebound than forecasters initially expected."

END_OF_DOCUMENT_TOKEN_TO_BE_REPLACED

May oil futures are negative.  People are paying other people to figure out how to store May oil production contracts:

END_OF_DOCUMENT_TOKEN_TO_BE_REPLACED

Sorry about this morning’s OTR post, restoring my laptop’s hard drive after repair went long after I gave up and went to bed last night. I’ll post it Monday.

I’ve been pondering this renewable energy question off and on recently and figured I’d open it up to discussion to broaden my thinking.

The question is: if you pay a surcharge for renewable energy from your electricity provider, is it better to then be wasteful or at least a “big consumer” of that clean electricity in order to increase demand for clean electricity and thus spurring more investment in renewables, or should you try to be as energy-conscious as possible and not leave lights on, keep the thermostat down/up, etc.?

In this scenario, the electricity that comes in your house is technically a mix of renewable and dirty, but you pay a surcharge to have clean energy equal to your usage added to your provider’s feed. If every customer chose this option, all the electricity provided to your home would be from renewable sources.

My thinking is that, since demand increases investment/supply, it’s desirable to consume more electricity once you’re setup to pay the premium as described above. More investment in renewable energy is a good and a larger supply/higher percentage renewable in the renewable/dirty mix that my provider supplies is also a good. So except for wasting some money, it seems to me like wasting electricity is actually a good here.

If your supply is already 100% renewable (from a provider, not your own solar/wind/etc.), I’m undecided if it makes sense to be a “big consumer” or not.  Again, increasing demand means more investment in supply in your locality and region, and provides the market/investors evidence that such demand might exist in other under-served areas. Since a major goal of us who pay the surcharge for renewable or are willing to pay higher rates or invest in infrastructure like solar is to make a better, carbon-free world, there, perversely, seems to be a clear incentive to be wasteful here too. But I’m not sure.

Consider this a non-political open thread.

END_OF_DOCUMENT_TOKEN_TO_BE_REPLACED

Wow. For the first time ever, renewables are a bigger contributor to U.S. energy than coal https://t.co/WgQYXKTy9T pic.twitter.com/pjleiCnz9Q

END_OF_DOCUMENT_TOKEN_TO_BE_REPLACED

Natural gas producers in West Virginia no longer can drill on one person’s property to reach gas reserves under adjoining or neighboring tracts, the state Supreme Court said Wednesday in a much-anticipated ruling that gives additional leverage to residents struggling with the effects from the booming industry.

In a 5-0 ruling, the justices upheld a lower court ruling and jury verdict against EQT Corp., siding with two Doddridge County residents who had sued the state’s second-largest gas company.

Justice John Hutchison wrote that gas and other mineral companies must obtain permission from surface owners to use their land to reach reserves under other properties.

“The court will not imply a right to use a surface estate to conduct drilling or mining operations under neighboring lands,” Hutchison wrote. “The right must be expressly obtained, addressed, or reserved in the parties’ deeds, leases, or other writings.”

In the case, two people who live on a 300-acre farm in Doddridge County said EQT came onto their land to extract gas from underneath adjacent properties. The two people, Beth Crowder and David Wentz, warned EQT that the company would be trespassing. EQT entered the property anyway. Crowder and Wentz sued, and a local circuit judge ruled in their favor, and a jury two years ago awarded them nearly $200,000 in damages.

It’s insane that a company would be so brazen as to even take this to court, but, you know, West Virginia.

END_OF_DOCUMENT_TOKEN_TO_BE_REPLACED 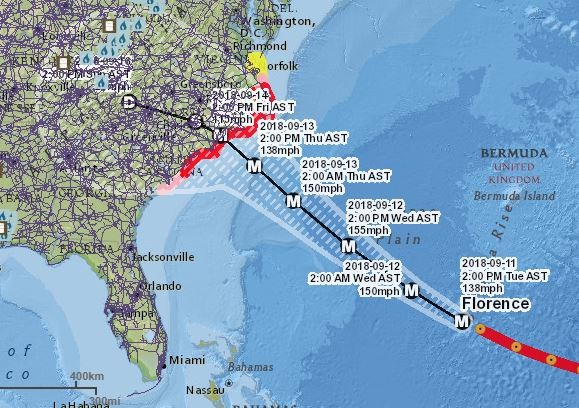 The Energy Information Administration has an interactive map of energy infrastructure with storm information. It looks like something that energy nerds could spend some time with even when we’re not expecting major storm disruptions. The graphic at the top of the post is a screen grab. Check out the real thing. Also lots of useful links to energy information on the page.

END_OF_DOCUMENT_TOKEN_TO_BE_REPLACED

National Park Service officials have deleted every mention of humans’ role in causing climate change in drafts of a long-awaited report on sea level rise and storm surge, contradicting Interior Secretary Ryan Zinke’s vow to Congress that his department is not censoring science.

The document was supposed to report results of studies on the risks to National Park properties from sea level rise, which is one of the major proximate consequences of anthropogenic global warming.  Stuff like this:

The report, titled, “Sea Level Rise and Storm Surge Projections for the National Park Service,” reveals that national treasures will face severe flooding if global greenhouse gases keep increasing. Some of its projections, according to the drafts, include: 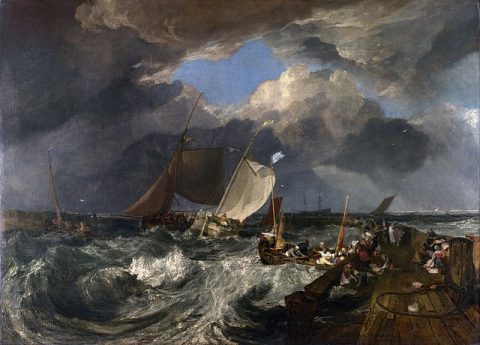 This is the kind of information that would be useful — complete with an analysis of causes and mechanisms — to anyone trying to think how to protect America’s parks, and/or mitigate the damage that human action has set in train.  Interior Secretary Zinke and his staff — and the Trump administration as a whole, and the GOP in toto — seem to think that not saying certain words means that what those words name won’t happen.

Sadly, of course, carbon dioxide don’t care if Mr. Zinke doesn’t want to pay attention to its radiative properties. The atmosphere in bulk isn’t somehow going to get rid of the last 20 years of CO2 ppm increase just because Republicans shout at it.  The ocean isn’t going to turn around in its tracks because Deadbeat Donnie, the orange hemorrhoid-cream salesman now sadly infesting the White House wiggles his ample posterior over a putt (that he’ll miss) on some seaside golf course.

King Knut knew better, even if he had to make the live demonstration to prove it too his court.

And then there’s Exhibit B:

Dead Man Walking Trump/GOP Corruption Poster Child Scott Pruitt won’t be dynamited out of his office at the EPA without attempting to gut one more Obama-era accomplishment, the increase in fleet fuel efficiency requirements for American light trucks and cars:

Environmental Protection Agency Administrator Scott Pruitt announced Monday that he would revoke Obama-era standards requiring cars and light trucks sold in the United States to average more than 50 miles per gallon by 2025, a move that could change the composition of the nation’s auto fleet for years.

This is no surprise from Pruitt, of course, who never met a fossil he didn’t want to burn (and whose long term livelihood and political ambitions turn entirely on making sure Big Carbon loves them some Scott).  It will be challenged in court, and California may yet save the day.

Before that gets settled, though, two thoughts:

First: this is a reminder that you cannot trust oligopoly capital under any circumstances. The new standards were negotiated over a quite a long time with the big automakers, and they signed on to the Obama deal. As soon as Trump was elected, they reneged:

Pruitt’s decision reflects the power of the auto industry, which asked him to revisit the Obama administration’s review of the model years 2022-2025 fuel-efficiency targets just days after he took office.

The Auto Alliance (these guys) will tell you that they’re all about clean transportation — just look at their home page!  But it took them less than a month (see p. 4) into the new guy’s term to write to the Trump administration and seek a do-over.  You could have had these guys put up Agamemnon’s pledge and they’d have backed out on this deal as soon as they got the chance. 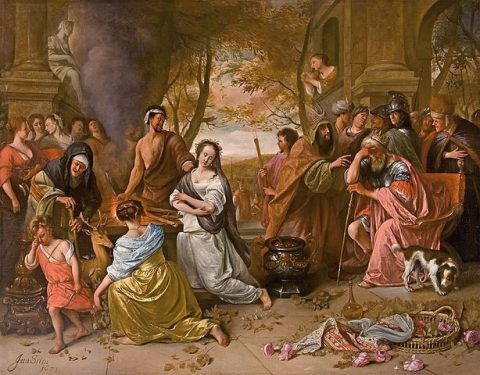 So:  moral one. Don’t trust anyone with that much cash on the line until you have at least one of their kidney’s in pawn. And maybe not even then.

Moral two: this is how big US industries die.  I’m sure it will be nice for those who pay for their hookers and blow by selling SUVs that the gravy train will run a few years longer.  But the rest of the world isn’t completely ignorant of climate change and, more immediately, the insane and expensive toll that air pollution takes on their cities.

I’m old enough to remember the ’70s, when the Big Three US automakers discovered in a shocking short time just how destructive it could be to miss the next technological and design shift.  Fuel efficient and alternate fuel vehicles are not just coming; they’re here. If the US-based auto industry wants to let China or whoever get one, two, three generations ahead of domestic production, that’ll happen.  And those companies and vehicles will roll, and ours will straggle behind.

Again: our kleptocratic leaders can say what they want. Shortsighted corporations can grab for the next dollar, and miss next year’s millions. Don’t change a thing.

So, in sum: this is one dumb move on every level, and puts yet more pressure on an already breaking climate system. But I don’t think that a change in US fleet standards is nearly as big a deal as Pruitt et al. wish it were.  Much of the world doesn’t give a shit about our stupidity, and the creation of a more efficient transport system is already on rails (sorrynotsorry).  ISTM that this move is mostly a surrender of crucial industrial ambition and opportunity to other regions and will have only a minor effect on emissions going forward.

IOW: Trump, Pruitt, the Republicans and Big Auto just punched America in the nuts, for all the joy it brings them.

Also too: King Knut was a pretty smart guy.

Jan Steen, The Sacrifice of Iphigenia, 1671.